CQRS stands for Command and Query Responsibility Segregation, a pattern that separates read and update operations for a data store. Implementing CQRS in your application can maximize its performance, scalability, and security. The flexibility created by migrating to CQRS allows a system to better evolve over time and prevents update commands from causing merge conflicts at the domain level.

In traditional architectures, the same data model is used to query and update a database. That's simple and works well for basic CRUD operations. In more complex applications, however, this approach can become unwieldy. For example, on the read side, the application may perform many different queries, returning data transfer objects (DTOs) with different shapes. Object mapping can become complicated. On the write side, the model may implement complex validation and business logic. As a result, you can end up with an overly complex model that does too much. 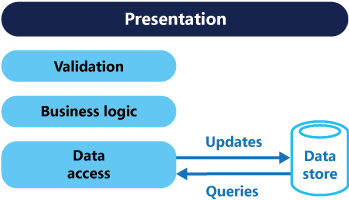 The models can then be isolated, as shown in the following diagram, although that's not an absolute requirement. 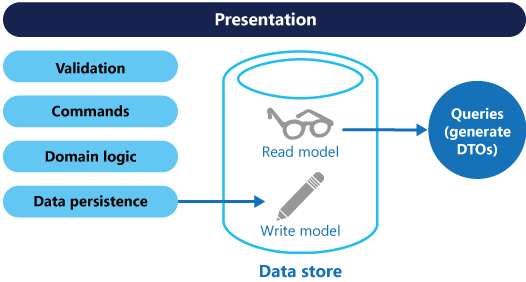 Having separate query and update models simplifies the design and implementation. However, one disadvantage is that CQRS code can't automatically be generated from a database schema using scaffolding mechanisms such as O/RM tools.

If separate read and write databases are used, they must be kept in sync. Typically this is accomplished by having the write model publish an event whenever it updates the database. For more information about using events, see Event-driven architecture style. Updating the database and publishing the event must occur in a single transaction.

Separation of the read and write stores also allows each to be scaled appropriately to match the load. For example, read stores typically encounter a much higher load than write stores.

Some implementations of CQRS use the Event Sourcing pattern. With this pattern, application state is stored as a sequence of events. Each event represents a set of changes to the data. The current state is constructed by replaying the events. In a CQRS context, one benefit of Event Sourcing is that the same events can be used to notify other components — in particular, to notify the read model. The read model uses the events to create a snapshot of the current state, which is more efficient for queries. However, Event Sourcing adds complexity to the design.

Benefits of CQRS include:

Some challenges of implementing this pattern include:

When to use CQRS pattern

Consider CQRS for the following scenarios:

This pattern isn't recommended when:

Consider applying CQRS to limited sections of your system where it will be most valuable.

The CQRS pattern is often used along with the Event Sourcing pattern. CQRS-based systems use separate read and write data models, each tailored to relevant tasks and often located in physically separate stores. When used with the Event Sourcing pattern, the store of events is the write model, and is the official source of information. The read model of a CQRS-based system provides materialized views of the data, typically as highly denormalized views. These views are tailored to the interfaces and display requirements of the application, which helps to maximize both display and query performance.

Using the stream of events as the write store, rather than the actual data at a point in time, avoids update conflicts on a single aggregate and maximizes performance and scalability. The events can be used to asynchronously generate materialized views of the data that are used to populate the read store.

Because the event store is the official source of information, it is possible to delete the materialized views and replay all past events to create a new representation of the current state when the system evolves, or when the read model must change. The materialized views are in effect a durable read-only cache of the data.

When using CQRS combined with the Event Sourcing pattern, consider the following:

The following code shows some extracts from an example of a CQRS implementation that uses different definitions for the read and the write models. The model interfaces don't dictate any features of the underlying data stores, and they can evolve and be fine-tuned independently because these interfaces are separated.

The system allows users to rate products. The application code does this using the RateProduct command shown in the following code.

The system uses the ProductsCommandHandler class to handle commands sent by the application. Clients typically send commands to the domain through a messaging system such as a queue. The command handler accepts these commands and invokes methods of the domain interface. The granularity of each command is designed to reduce the chance of conflicting requests. The following code shows an outline of the ProductsCommandHandler class.

The following patterns and guidance are useful when implementing this pattern: