Hello AskDS Populous, Mike here and I want to share with you some of the excellent enhancements we accomplished in Windows 8 and Windows Server 2012 around MaxTokenSize. Let’s review MaxTokenSize and its symptoms before we jump in to wonderful world of Windows 8 (say that three times fast).

Kerberos is the default and preferred authentication protocol since the release of Windows 2000 Server. Over the last few years, Microsoft has made some significant investments in provided extensions to the protocol. One of those extensions to Kerberos is the Privilege Attribute Certificate or PAC (defined in Windows Server Protocol specification MS-PAC).

Microsoft created the PAC to encapsulate authorization related information in a manner consistent with RFC4120. The authorization information included in the PAC includes security identifiers, user profile information such as Full name, home directory, and bad password count. Security identifiers (SIDs) included in the PAC represent the user's current SID and any instances of SID history and security group memberships to the extent of current domain groups, resource domain groups, and universal groups.

Let's face the facts of today's IT environment… authentication and authorization is not getting easier; it's becoming more complex. In the world of single sign-on and user claims, the amount of authorization data is increasing. Increasing authorization data in an infrastructure that has already had its experiences with authentication failures because a user was a member of too many groups justifies some concern for the future. Fortunately, Windows 8 and Windows Server 2012 have features to help us take proactive measures to avoid the problem.

Windows 8 and Windows Server 2012 benefit from an increased MaxTokenSize of 48k. Therefore, when HTTP relies on the MaxTokenSize value as the value used for memory allocation; it will allocate 48k of memory for the authentication buffer, which hold a substantially more authorization information than in previous versions of Windows where the default MaxTokenSize was only 12k.

Windows 8 and Windows Server 2012 introduce two new computer-based policy settings that help combat against large service tickets, which is the cause of the MaxTokenSize dilemma. The first of these policy settings is not exactly new-- it has been in Windows for years, but only as a registry value. Use the policy setting Set maximum Kerberos SSPI context token buffer size to change the MaxTokenSize using group policy. Looking closely at this policy setting in the Group Policy Management Editor, you'll notice the icon for this setting is slightly different from the others around it.

This difference is attributed to registry location the policy setting modifies when enabled or disabled. This registry setting is the actual MaxTokenSize registry key and value name that has been used in earlier versions of Windows

Therefore, you can use this computer-based policy setting to manage Windows 8, Windows Server 2012, and earlier versions of Windows. The catch here is that this registry location is not a managed policy location. Managed policy locations are removed and reapplied during policy refreshes to avoid persistent settings in the registry after the settings in a Group Policy object become out of scope. That behavior does not occur with this key, as the setting applied by this policy setting is not removed during application. Therefore, the policy setting persists even if the Group Policy object providing the setting falls out of scope.

The second policy setting is very cool and answers the question that customers always asked when they encounter a problem with MaxTokenSize: "How big is the token? " You might be one of those people that went on the crusade of a lifetime using TOKENSZ.EXE and spent countless hours trying to determine the optimal MaxTokenSize for your environment. Those days are gone. 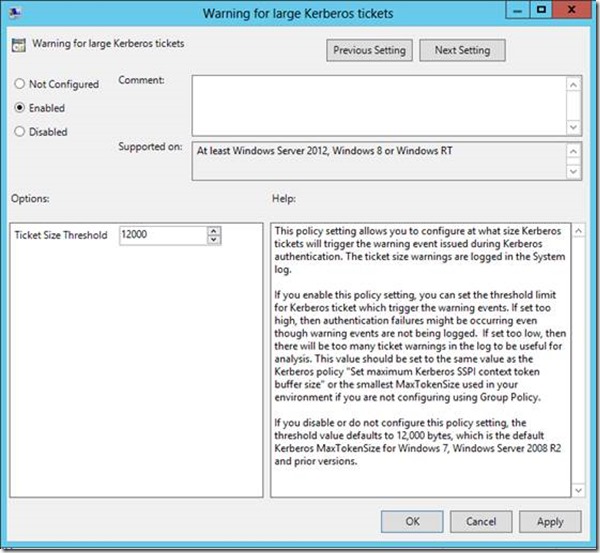 Ideally, if you use this policy setting, then you'd likely want to set the ticket threshold value to approximately 1k less than your current MaxTokenSize. You want it lower than your current MaxTokenSize (unless you are using 12k, that is the minimum value) so you can use the warning events as a proactive measure to avoid an authentication failure due to an incorrectly sized buffer. Setting the threshold too low will just train you to ignore the Event 31 warnings because they'll become noise in the event log. Setting it too high and you're likely to be blindsided with authentication failures rather than warning events.

Earlier I said that this policy setting solves your problems with fumbling with TOKENSZ and other utilities to determine MaxTokenSize-- here's how. If you examine the details of the Kerberos-Key-Distribution-Center Warning event ID 31, you'll notice that it gives you all the information you need to determine the optimal MaxTokenSize in your environment. In the following example, the user Ned is a member of over 1000 groups (he's very popular and a big deal on the Internet). When I attempt to log on Ned using the RUNAS command, I generated an Event ID 31. The event description provides you with the service principal name, the user principal name, the size of the ticket requested and the size of the threshold. This enables you to aggregate all the event 31s and identify the maximum ticket size requested. Armed with this information, you can set the optimal MaxTokenSize for your environment. 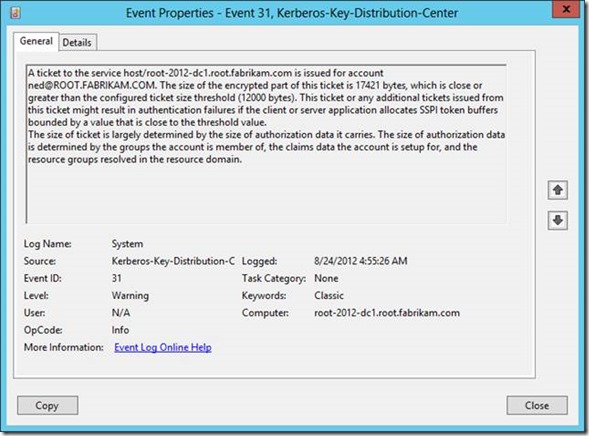 There's the skinny on the Kerberos enhancements included in Windows 8 and Windows Server 2012 that specifically target large service ticket and MaxTokenSize scenarios. To summarize:

Keep an eye out for more Windows 8 and Kerberos needful