WinObj is a must-have tool if you are a system administrator concerned about security, a developer tracking down object-related problems, or just curious about the Object Manager namespace.

WinObj is a 32-bit Windows NT program that uses the native Windows NT API (provided by NTDLL.DLL) to access and display information on the NT Object Manager's name space. Winobj may seem similar to the Microsoft SDK's program of the same name, but the SDK version suffers from numerous significant bugs that prevent it from displaying accurate information (e.g. its handle and reference counting information are totally broken). In addition, our WinObj understands many more object types. Finally, Version 2.0 of our WinObj has user-interface enhancements, knows how to open device objects, and will let you view and change object security information using native NT security editors.

There is no device driver component to WinObj, so you can run it like any Win32 program. 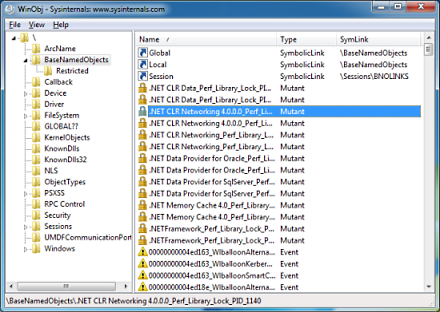 The Object Manager is in charge of managing NT objects. As part of this responsibility, it maintains an internal namespace where various operating system components, device drivers and Win32 programs can store and lookup objects. The native NT API provides routines that allow user-mode programs to browse the namespace and query the status of objects located there, but the interfaces are undocumented.

Helen Custer's Inside Windows NT provides a good overview of the Object Manager name space, and Mark's October 1997 WindowsITPro Magazine column, "Inside the Object Manager", is (of course) an excellent overview.