This example scenario provides architecture and design guidance for any organization that wants to perform image-based modeling on Azure infrastructure-as-a-service (IaaS). The scenario is designed for running photogrammetry software on Azure Virtual Machines (VMs) using high-performance storage that accelerates processing time. The environment can be scaled up and down as needed and supports terabytes of storage without sacrificing performance.

Relevant use cases include:

This example describes the use of Agisoft PhotoScan photogrammetry software backed by Avere vFXT storage. PhotoScan was chosen for its popularity in geographic information system (GIS) applications, cultural heritage documentation, game development, and visual effects production. It is suitable for both close-range photogrammetry and aerial photogrammetry.

The concepts in this article apply to any high-performance computing (HPC) workload based on a scheduler and worker nodes managed as infrastructure. For this workload, Avere vFXT was selected for its superior performance during benchmark tests. However, the scenario decouples the storage from the processing so that other storage solutions can be used (see alternatives later in this document). 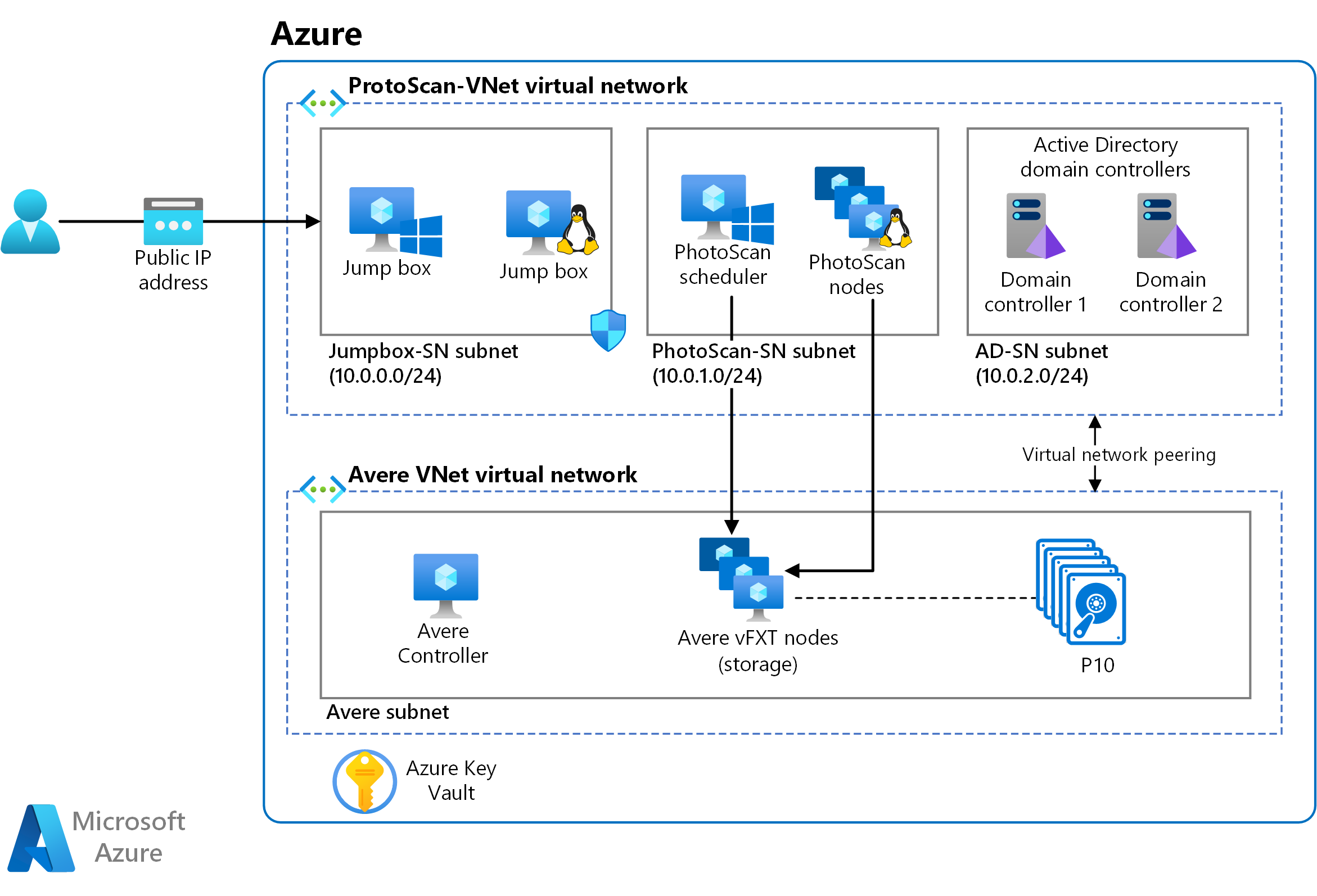 This scenario is designed specifically to provide high-performance storage for an HPC workload, whether it is deployed on Windows or Linux. In general, the storage configuration of the HPC workload should match the appropriate best practices used for on-premises deployments.

Deployment considerations depend on the applications and services used, but a few notes apply:

This example focuses on deploying a high-performance storage solution for an HPC workload and is not a security solution. Make sure to involve your security team for any changes.

For added security, this example infrastructure enables all the Windows VMs to be domain-joined and uses Active Directory for central authentication. It also provides custom DNS services for all VMs. To help protect the environment, this template relies on network security groups. Network security group offer basic traffic filters and security rules.

Consider the following options to further improve security in this scenario:

The cost of running this scenario can vary greatly depending on multiple factors. The number and size of VMs, how much storage is required, and the amount of time to complete a job will determine your cost.

The following sample cost profile in the Azure pricing calculator is based on a typical configuration for Avere vFXT and PhotoScan:

For details about this architecture, see the e-book. To see how the pricing would change for your particular use case, choose different VM sizes in the pricing calculator to match your expected deployment.

For step-by-step instructions for deploying this architecture, including all the prerequisites for using either Avere FxT or BeeGFS, download the e-book Deploy Agisoft PhotoScan on Azure With Avere vFXT for Azure or BeeGFS.

The following resources will provide more information on the components used in this scenario, along with alternative approaches for batch computing on Azure.