This reference architecture shows a microservices application deployed to Azure Kubernetes Service (AKS). It describes a basic AKS configuration that can be the starting point for most deployments. This article assumes basic knowledge of Kubernetes. The article focuses mainly on the infrastructure and DevOps considerations of running a microservices architecture on AKS. For guidance on how to design microservices, see Building microservices on Azure.

A reference implementation of this architecture is available on GitHub. 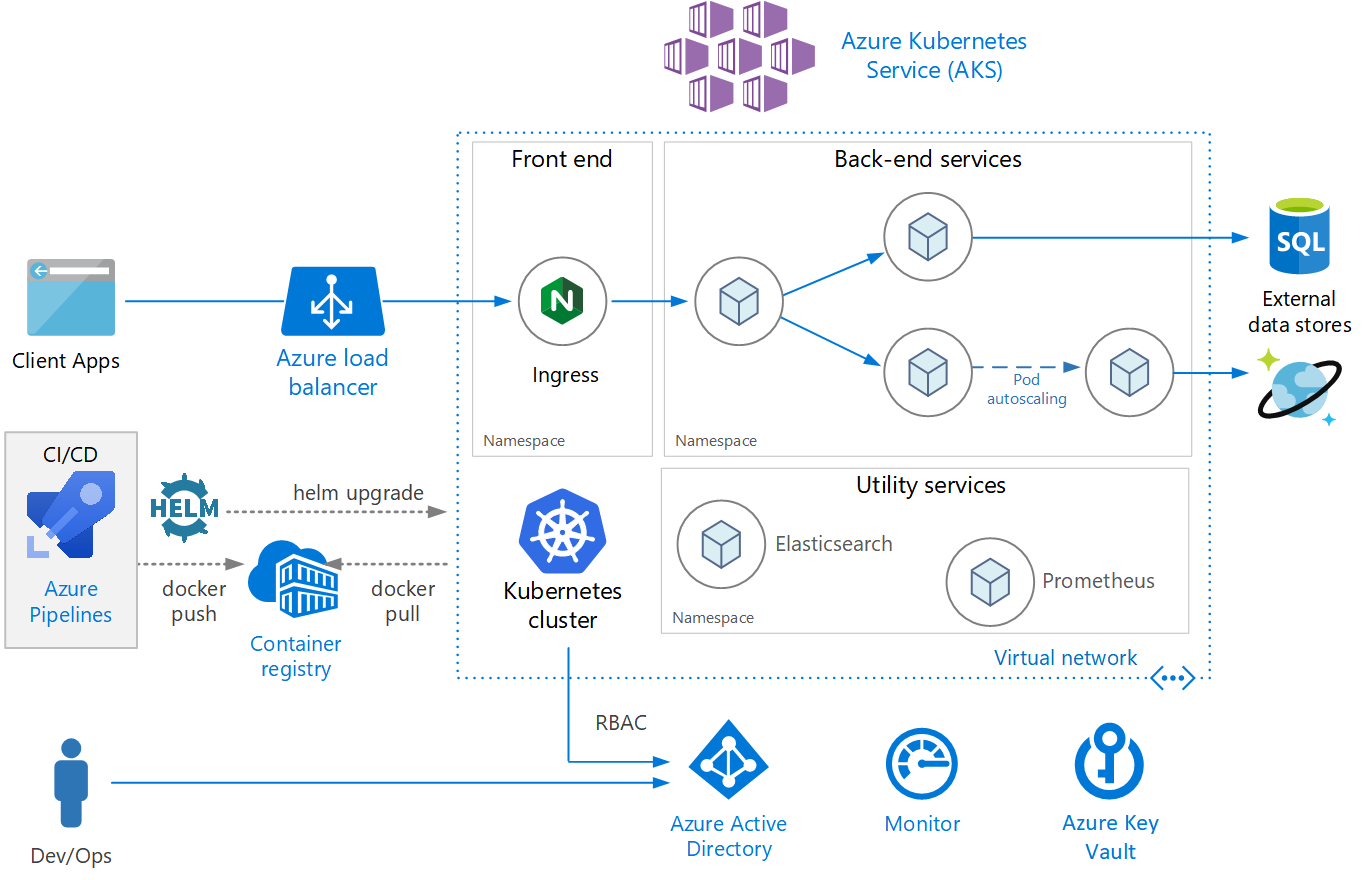 Virtual network. By default, AKS creates a virtual network to deploy the agent nodes into. For more advanced scenarios, you can create the virtual network first, which lets you control things like how the subnets are configured, on-premises connectivity, and IP addressing. For more information, see Configure advanced networking in Azure Kubernetes Service (AKS).

Ingress. An ingress exposes HTTP(S) routes to services inside the cluster. For more information, see the section API Gateway below.

Azure Pipelines. Pipelines is part of Azure DevOps Services and runs automated builds, tests, and deployments. You can also use third-party CI/CD solutions such as Jenkins.

Helm. Helm is as a package manager for Kubernetes — a way to bundle Kubernetes objects into a single unit that you can publish, deploy, version, and update.

Azure Monitor. Azure Monitor collects and stores metrics and logs, including platform metrics for the Azure services in the solution and application telemetry. Use this data to monitor the application, set up alerts and dashboards, and perform root cause analysis of failures. Azure Monitor integrates with AKS to collect metrics from controllers, nodes, and containers, as well as container and node logs.

This reference architecture is focused on microservices architectures, although many of the recommended practices will apply to other workloads running on AKS.

A microservice is a loosely coupled, independently deployable unit of code. Microservices typically communicate through well-defined APIs and are discoverable through some form of service discovery. The service should always be reachable even when the pods move around. The Kubernetes Service object is a natural way to model microservices in Kubernetes.

API gateways are a general microservices design pattern. An API gateway sits between external clients and the microservices. It acts as a reverse proxy, routing requests from clients to microservices. It may also perform various cross-cutting tasks such as authentication, SSL termination, and rate limiting. For more information, see

In Kubernetes, the functionality of an API gateway is mostly handled by the Ingress resource and the Ingress controller. The considerations are described in the Ingress section.

In a microservices architecture, services should not share data storage. Each service should own its own private data in a separate logical storage, to avoid hidden dependencies among services. The reason is to avoid unintentional coupling between services, which can happen when services share the same underlying data schemas. Also, when services manage their own data stores, they can use the right data store for their particular requirements. For more information, see Designing microservices: Data considerations.

Avoid storing persistent data in local cluster storage, because that ties the data to the node. Instead,

The Kubernetes Service object provides a set of capabilities that match the microservices requirements for service discoverability:

The following diagram shows the conceptual relation between services and pods. The actual mapping to endpoint IP addresses and ports is done by kube-proxy, the Kubernetes network proxy.

Ingress abstracts the configuration settings for a proxy server. You also need an Ingress controller, which provides the underlying implementation of the Ingress. There are Ingress controllers for Nginx, HAProxy, Traefik, and Azure Application Gateway, among others.

The Ingress resource can be fulfilled by different technologies. To work together, they need to be deployed as the Ingress controller inside the cluster. It operates as the edge router or reverse proxy. A reverse proxy server is a potential bottleneck or single point of failure, so always deploy at least two replicas for high availability.

Often, configuring the proxy server requires complex files, which can be hard to tune if you aren't an expert. So, the Ingress controller provides a nice abstraction. The Ingress controller also has access to the Kubernetes API, so it can make intelligent decisions about routing and load balancing. For example, the Nginx ingress controller bypasses the kube-proxy network proxy.

On the other hand, if you need complete control over the settings, you may want to bypass this abstraction and configure the proxy server manually. For more information, see Deploying Nginx or HAProxy to Kubernetes.

You may also need to rotate your certificates as per the organization's policies. For information, see, Rotate certificates in Azure Kubernetes Service (AKS).

Place utility services into their own separate namespace. For example, you might deploy Elasticsearch or Prometheus for cluster monitoring, or Tiller for Helm.

Although you can scale out pods and nodes manually, we recommend using autoscaling, to minimize the chance that services will become resource starved under high load. An autoscaling strategy must take both pods and nodes into account. If you just scale out the pods, eventually you will reach the resource limits of the nodes.

The Horizontal Pod Autoscaler (HPA) scales pods based on observed CPU, memory, or custom metrics. To configure horizontal pod scaling, you specify a target metric (for example, 70% of CPU), and the minimum and maximum number of replicas. You should load test your services to derive these numbers.

A side-effect of autoscaling is that pods may be created or evicted more frequently, as scale-out and scale-in events happen. To mitigate the effects of this:

Whereas HPA looks at actual resources consumed or other metrics from running pods, the cluster autoscaler is provisioning nodes for pods that aren't scheduled yet. Therefore, it looks at the requested resources, as specified in the Kubernetes pod spec for a deployment. Use load testing to fine-tune these values.

Kubernetes defines two types of health probe that a pod can expose:

When thinking about probes, it's useful to recall how a service works in Kubernetes. A service has a label selector that matches a set of (zero or more) pods. Kubernetes load balances traffic to the pods that match the selector. Only pods that started successfully and are healthy receive traffic. If a container crashes, Kubernetes kills the pod and schedules a replacement.

Liveness probes handle the case where a pod is still running, but is unhealthy and should be recycled. For example, suppose that a container is serving HTTP requests but hangs for some reason. The container doesn't crash, but it has stopped serving any requests. If you define an HTTP liveness probe, the probe will stop responding and that informs Kubernetes to restart the pod.

Here are some considerations when designing probes:

Resource contention can affect the availability of a service. Define resource constraints for containers, so that a single container cannot overwhelm the cluster resources (memory and CPU). For non-container resources, such as threads or network connections, consider using the Bulkhead Pattern to isolate resources.

Use resource quotas to limit the total resources allowed for a namespace. That way, the front end can't starve the backend services for resources or vice-versa.

Kubernetes and Azure both have mechanisms for role-based access control (RBAC):

AKS integrates these two RBAC mechanisms. When you create an AKS cluster, you can configure it to use Azure AD for user authentication. For details on how to set this up, see Integrate Azure Active Directory with Azure Kubernetes Service.

Once this is configured, a user who wants to access the Kubernetes API (for example, through kubectl) must sign in using their Azure AD credentials.

By default, an Azure AD user has no access to the cluster. To grant access, the cluster administrator creates RoleBindings that refer to Azure AD users or groups. If a user doesn't have permissions for a particular operation, it will fail.

Because the cluster admin credentials are so powerful, use Azure RBAC to restrict access to them:

When you define your RBAC policies (both Kubernetes and Azure), think about the roles in your organization:

It's a good practice to scope Kubernetes RBAC permissions by namespace, using Roles and RoleBindings, rather than ClusterRoles and ClusterRoleBindings.

Applications and services often need credentials that allow them to connect to external services such as Azure Storage or SQL Database. The challenge is to keep these credentials safe and not leak them.

For Azure resources, one option is to use managed identities. The idea of a managed identity is that an application or service has an identity stored in Azure AD, and uses this identity to authenticate with an Azure service. The application or service has a Service Principal created for it in Azure AD, and authenticates using OAuth 2.0 tokens. The executing process calls a localhost address to get the token. That way, you don't need to store any passwords or connection strings. You can use managed identities in AKS by assigning identities to individual pods, using the aad-pod-identity project.

Even with managed identities, you'll probably need to store some credentials or other application secrets, whether for Azure services that don't support managed identities, third-party services, API keys, and so on. Here are some options for storing secrets securely:

Using a system like HashiCorp Vault or Azure Key Vault provides several advantages, such as:

These are recommended practices for securing your pods and containers:

This reference architecture provides an Azure Resource Manager template for provisioning the cloud resources, and its dependencies. With the use of Azure Resource Manager templates you can use Azure DevOps Services to provision different environments in minutes, for example to replicate production scenarios. This allows you save cost and provision load testing environment only when needed.

Consider following the workload isolation criteria to structure your ARM template, a workload is typically defined as an arbitrary unit of functionality; you could, for exmaple, have a separate template for the cluster and then other for the dependant services. Workload isolation enables DevOps to perform continuous integration and continuous delivery (CI/CD), since every workload is associated and managed by its corresponding DevOps team.

Here are some goals of a robust CI/CD process for a microservices architecture:

To learn more about the challenges, see CI/CD for microservices architectures.

For specific recommendations and best practices, see CI/CD for microservices on Kubernetes.

Use the Azure pricing calculator to estimate costs. Other considerations are described in the Cost section in Microsoft Azure Well-Architected Framework.

Here are some points to consider for some of the services used in this architecture.

To estimate the cost of the required resources please see the Container Services calculator.

To deploy the reference implementation for this architecture, follow the steps in the GitHub repo.