Is there something like "zfs-auto-snapshot" for Windows and NTFS?


I'm using Windows and Linux, the latter with BTRFS and ZFS mostly these days and pretty much like the tool zfs-auto-snapshot creating and cleaning up snapshots regularly using CRON. I know that snapshots are no backup and backup is done additionally regularly as well to different storage and even different locations! Though, having regular snapshots available in case of accidental deletions or alike might prevent the need to access backups and are therefore of additional help. Especially in case of ZFS, which is designed with fast, efficient and a large number of snapshots in mind.


Under Windows I'm mostly backing up by creating images using WBADMIN on different USB-HDDs. WBADMIN creates snapshots using VSS as well and those snapshots seem to be integrated with Windows Explorer and its function to restore former versions of some directory or file. Though, it seems that not too many snapshots are kept this way over a longer period of time, but at some point instead they seem to be cleaned up automatically. Even though I have plenty of free disk space at all and a lot of that configured to be available for snapshots: 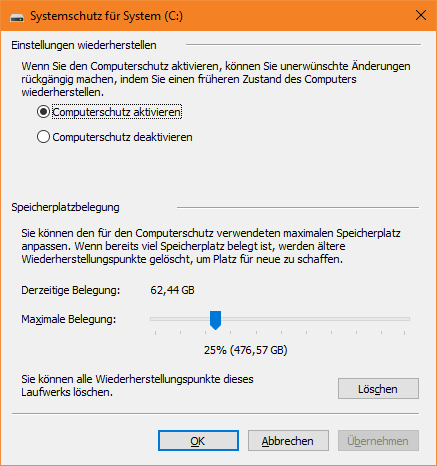 
What I would like to have is a tool like zfs-auto-snapshot, regularly creating persistent snapshots using VSS which are integrated with the Windows Explorer pretty much like those are created by WBADMIN. Of course it should take care of cleanups as well, at best not as soon as things seem to be cleaned up currently, so that a history of some weeks is available always. While I know about vssadmin, diskshadow etc. and in theory could implement something on my own, would be better to have something already working, at best being OSS and with a somewhat helpful community. Though, I couldn't find smething like that.

So, is there something like zfs-auto-snapshot for Windows and NTFS available already?


Just to make that clear again: I'm NOT asking for a general backup solution! It's really about creating and cleaning up snapshots only, pretty much like zfs-auto-snapshot does!

11 people are following this question.

Problem disk (C) and the usb