Note: The original blog article has been updated to address a number of questions we received and to further clarify what has been removed and what remains. Due to the Active Directory Documentation Blog being retired in October 2015, the comments have been removed. Please post your questions/comments in the Directory Services TechNet Forum .

In this blog article we will go into further detail and answer questions on what this means to you when you are migrating/upgrading to Windows Server 2016 and are using Identity Management for Unix/NIS Server with Windows Server today.

Why did Microsoft remove IDMU/NIS Server role from Windows Server?

After carefully reviewing and considering the feature usage, industry trends, availability of native Active Directory options on Linux/Unix and security concerns of NIS in general, the decision was made to remove the functionality from Windows Server. We announced the deprecation in the development phase of Windows Server 2012 R2 and have removed it from Windows Server 2016.

What IDMU/NIS Server components are removed from Windows Server 2016?

IDMU/NIS Server has been removed, specifically the following components are no longer included with Windows Server 2016:

I am using Windows Server IDMU/NIS Server role today, what should I do?

We recommend to start planning for alternatives, for example: native LDAP, Samba Client, Kerberos or other non-Microsoft options. Existing Windows Server 2012 R2 or earlier deployments will continue to be supported in accordance with the Microsoft Support lifecycle.

What happens when I have the NIS Server Role installed and try to upgrade to Windows Server 2016?

Can I continue to use the GID/UID (RFC 2307) attributes I am using today with Active Directory after I upgrade to Windows Server 2016?

For example, you may require the RFC 2307 attributes in combination with Network File System (NFS) Server (which does not require NIS Server role to be installed on Windows Server) to map the identity.

How do I continue to edit the GID/UID RFC 2307 attributes now that the Unix Attributes Plug-in is no longer available for the Active Directory Users and Computers MMC snap-in?

There are a couple of ways to continue to administer the attributes: 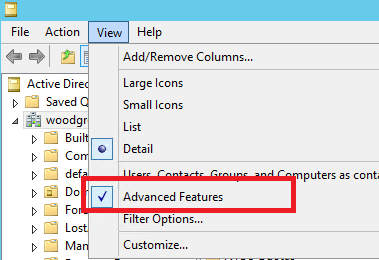 3.       Open the properties of a User, Group or Computer Object

4.       Navigate to “Attribute Editor” tab to edit the following attributes:

4.       Navigate to “Attribute Editor” tab to edit the following attributes:

o Below is sample code to query/configure the various attributes

#To query Unix Properties of a User Object

#To query Unix Properties of a Group object

#To query Unix Properties of a Computer Object

o Below, is sample output from the sample code above

Sample output from the PowerShell Script:

· Using VBScript: There is also a TechNet blog article from a while back that has some additional detail to configure and populate the attributes in Active Directory https://blogs.technet.com/b/dsix/archive/2009/04/16/integrating-unix-client-in-active-directory-using-ldap-part-i.aspx.

Thank you for reading this article!

Note: Questions and comments are welcome. However, please DO NOT post a request for troubleshooting by using the comment tool at the end of this post. Instead, post a new thread in the Directory Services Technet forum. Thank you!