As I tweeted the other day, my new Windows Phone 7 book is now available for pre-order.  Here's the first draft of the cover (with many app icons still needed to be filled in): 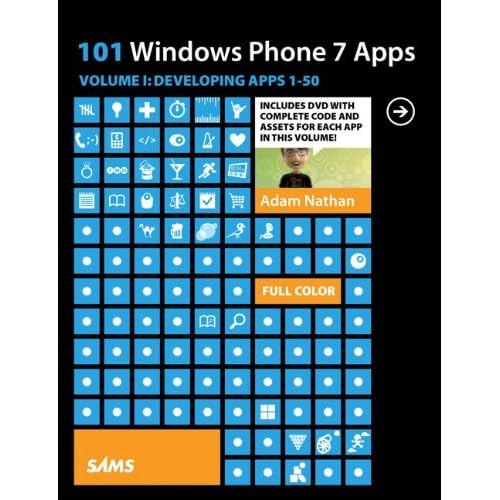 The title could be a little confusing (and we might still tweak it), so let me be clear that this is a book for software developers!  Each chapter walks you through the creation of a full app, teaching you lessons about Silverlight and Windows Phone along the way.  The first 10 chapters alone could be an entire book on Silverlight, with coverage of controls, layout, events, data binding, resources, styles, custom controls, and much more!  I put great emphasis in creating apps that look and feel like the apps that ship with the phone, so you'll learn how to use the application bar, pivot/panorama controls, animations, etc. the way that they were intended to be used.  And having created so many complete Windows Phone apps, I've got tons of tips and pitfalls to share.

The 101 apps are real apps.  Apps that are (or will be) in the marketplace.  Apps that people are willing to pay for.  101 apps == 101 chapters, spread across two volumes.  Volume I covers 50 apps, and Volume II will cover 51 apps.  Volume I is organized as follows:

Each volume includes a disc with full source & artwork for the apps covered in that volume.  Even if you don't read the book, you could take the source code to, say, Tip Calculator, and add some features to it.  You only need to make yours slightly better than mine, and you might have the best tip calculator in the marketplace!  Or, perhaps you could repurpose the source code and create a loan calculator.  No matter what your app idea, "there's a chapter for that!"

To get more updates on this book, switch over to my new blog at http://adamnathan.net.  Thanks!