According to the BBC, self-replicating robots are now a reality. 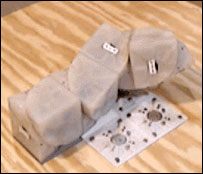 "By turning and moving, the cubes can pick up new units, decide where they belong, and stack them alongside each other to make new devices.

In a little more than a minute, a simple three-cube robot can make a copy of itself.

That offspring version can then make further copies. It's only a toy demonstration of the idea, but lead researcher Hod Lipson, of Cornell University in Ithaca, New York, has bold plans for these intelligent modular machines."

How long before the nanotechnologists achieve the same?

Update: MSNBC has an insane video showing this thing in action.