A seminal paper came out in 2010. It described a new way of architecting distributed solutions. As the paper gained traction, containerization also started to become popular. DataBricks and Mesosphere launched as startups, with DataBricks releasing Spark and Mesosphere releasing Mesos, then DC/OS. 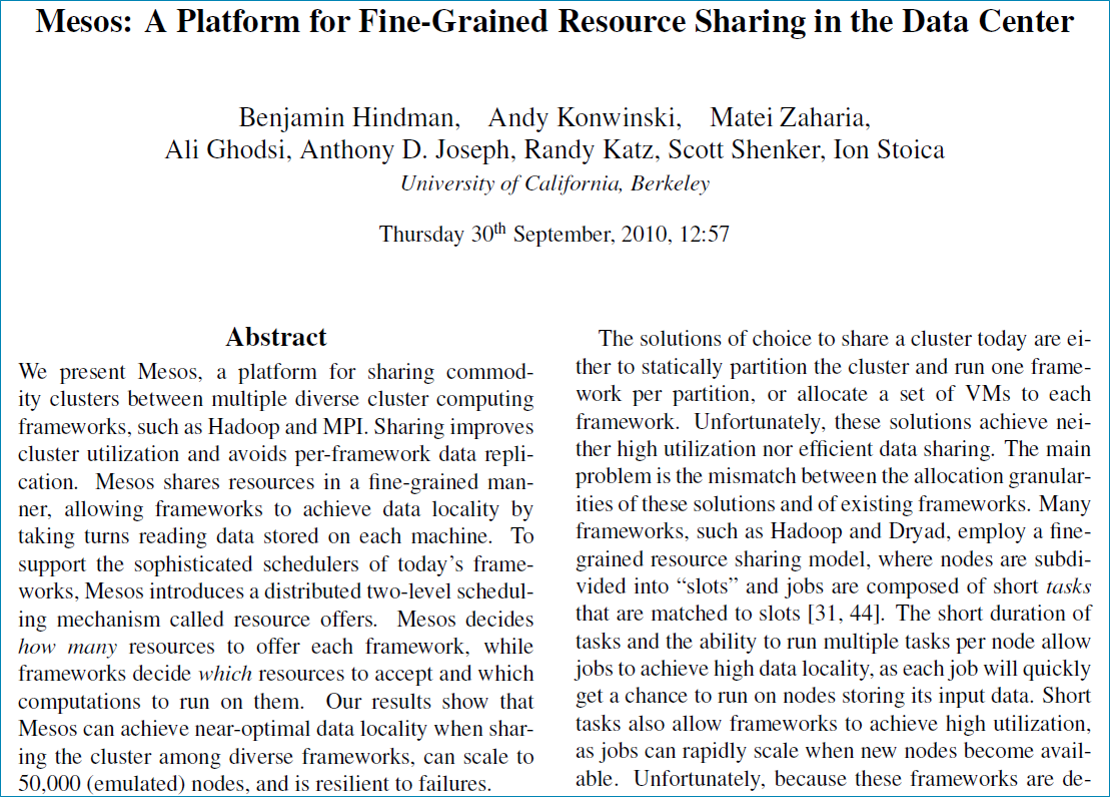 Figure 1: The paper that launched an industry

The 3 dominant players in this space are: (1) Mesosphere DC/OS; (2) Google Kubernetes; (3) Docker Data Center. Those are cluster managers/orchestrators, which are beyond the scope of this article.

The big outcome out of the Hindman paper is Mesos. His whitepaper focuses on the decoupling of the scheduler, giving you the flexibility to control how your containers are scheduled. 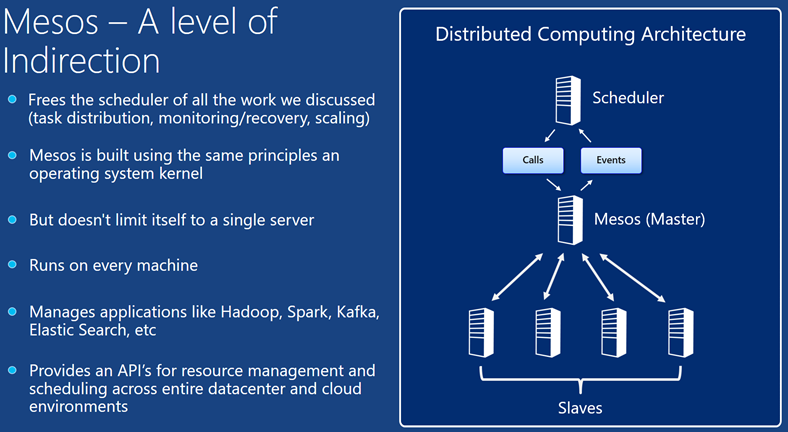 Adoption for this new paradigm is fraught with challenges

There are some good reasons why adoption for new distributed architecture and containerized is a challenge in the area of point-of-sale systems. Retailers can't afford downtime - ever. Even in my lifetime I've been told maybe twice that I cannot order something because the system is down. 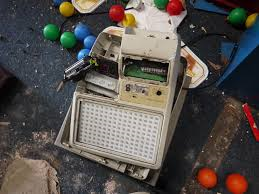 Figure 3: You absolutely, positively must be able to take orders

Retailers always need to be able to take money from customers. That's why most point-of-sale systems run on-premises. Point-of-sale systems that depend on cloud connectivity are vulnerable due to networking woes. After all, many retail locations exist in the hinterlands, areas that could be considered rural and somewhat disconnected from the Internet.

Regardless, the future is the cloud

Clearly, the world is becoming increasingly connected so the time is now to start thinking about moving to a cloud-based point-of-sale system. 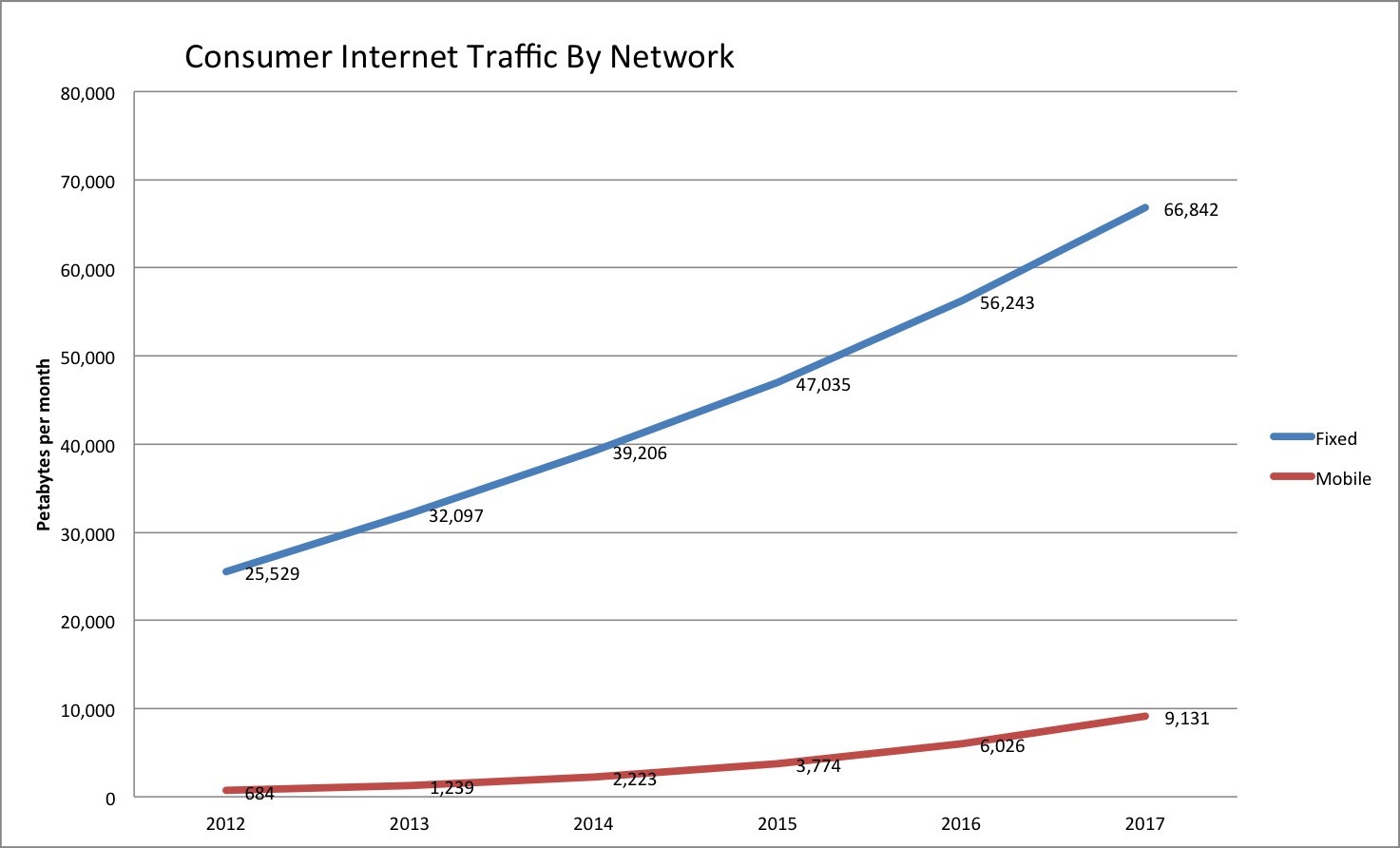 Figure 4: Eventually, the cloud will be good enough to run most POS systems

What are some strategies to moving to the cloud and to perhaps running containerized?

This blog post addresses some of the challenges as well as some of the opportunities to move in the direction of distributed, containerized workloads. I work closely with some of the biggest retail brands in the world around this challenge, and here are some of my thoughts.

We can begin our discussion by viewing the diagram below, which is a rather simplistic version of what most retailers actually face. Many retailers have stores in the tens of thousands across the entire planet. What I want you to notice is that typically point-of-sale systems are on-premise, single tenant, monolithic applications. 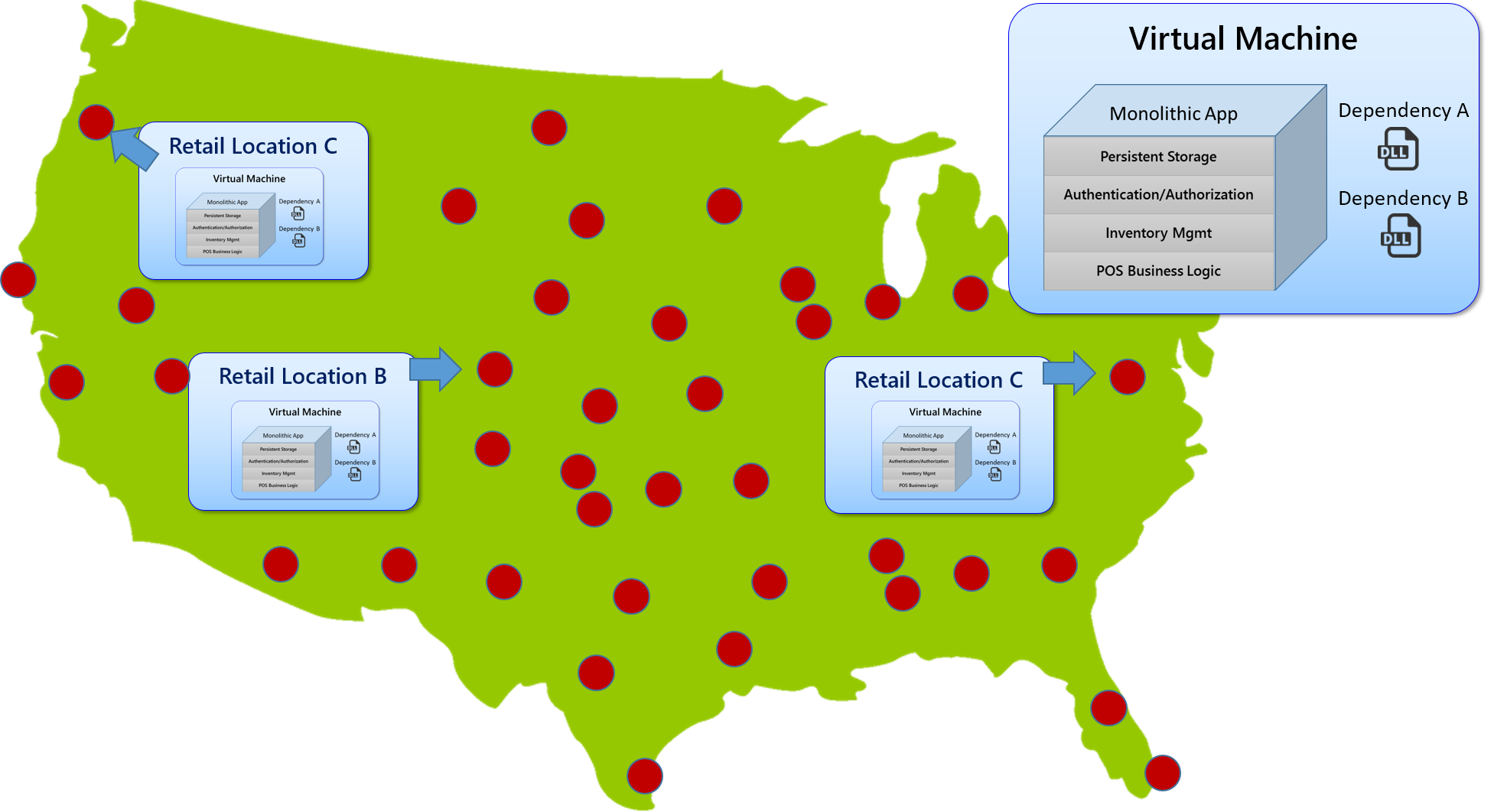 There are good reasons to question monolithic architectures.

The most significant pain point, particularly as it relates to the retail industry, is that Continuous deployment is difficult.

A great deal of friction can result in the CI/CD pipeline.

In many cases it can take over a year to roll out new upgrades of the software. In a retail world where agility is paramount, this inability to increase deployment velocity can be crippling. The deployment issue gets progressively more difficult where you have thousands of retail outlets scattered throughout the world. These rollouts can be tricky as you can't afford any store downtime. In addition, many retail outlets have customized software, not to mention localization-specific deployments. Finally, the hardware platforms running these point-of-sale systems may be in various forms of upgrade, meaning that the hardware footprint may differ dramatically among store locations.

But being able to update point-of-sale systems frequently can provide other benefits:

Specifically with respect to point-of-sale systems there is the ability to implement loyalty programs more quickly, respond to changes in the competitive landscape.

This need to synchronize the application along with its dependencies becomes another pain point. One problem is that the virtual machines are optimized to run that single application. If additional apps need to run on VMs, those dependencies must be installed alongside existing dependencies. This leads to versioning challenges with dependencies. 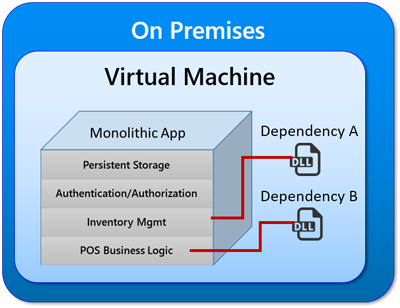 There is no question that connectivity and internet bandwidth is continuing to improve. There will be a point at which the public cloud will play a dominant role in point of sale systems, as explained previously.

By now, most of know the benefits of the public cloud. Here is a quick outline: 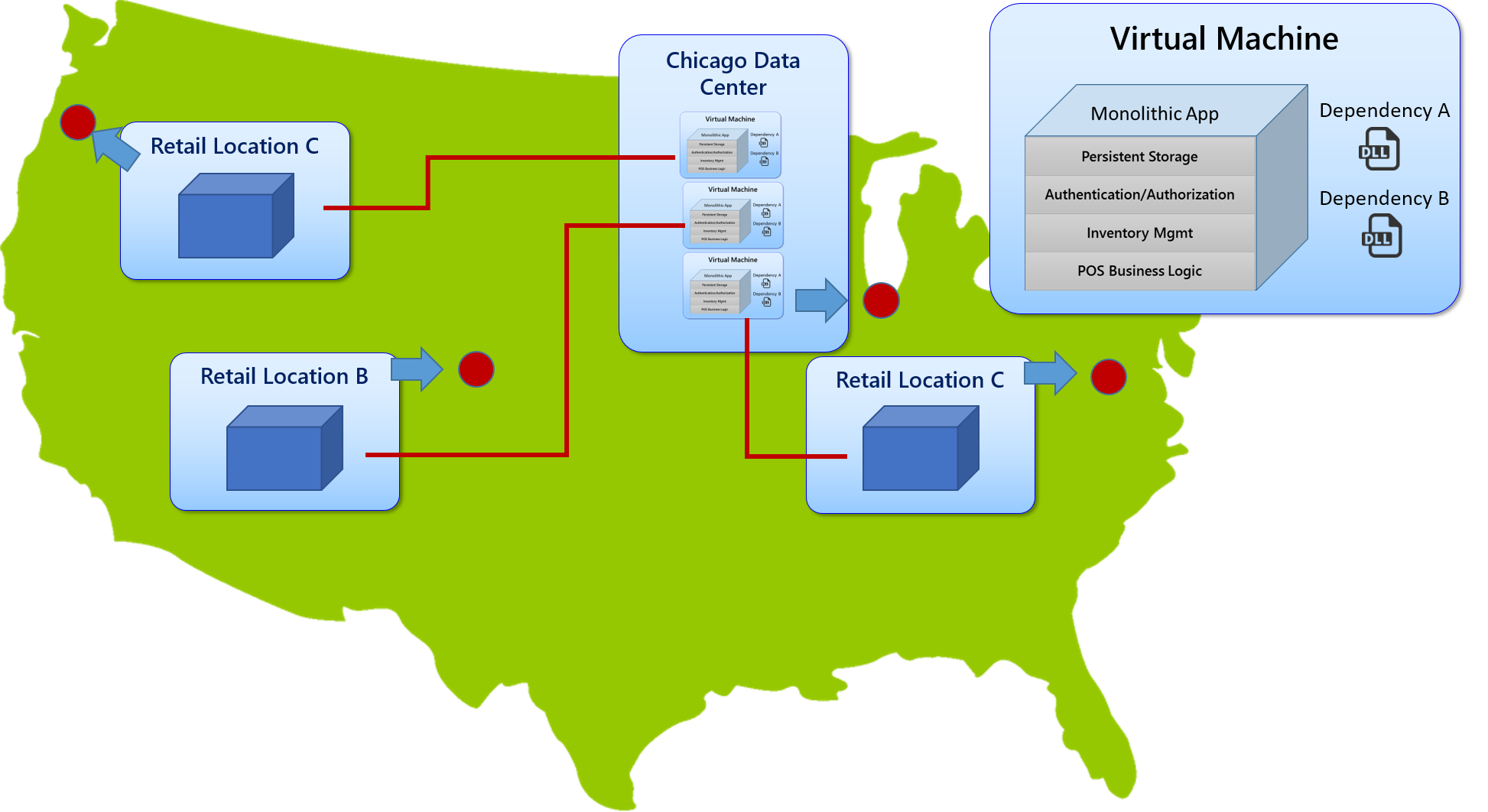 There are more problems to solve - Can containerization help?

Given all this context, can you containerize so that you could have a greater deployment velocity and reduce external dependencies? It isn't simple, but the answer is "yes."

Let's make some big assumptions so that we can at least talk about re-architecting. Let's assume that you have redundant and excellent network connectivity to the cloud (this is becoming increasingly the case throughout the world). Let's also assume that you have control over the infrastructure running on premises. This would enable you to run your monolithic app in a container in multiple locations:

Some important concepts to understand from the figure below: 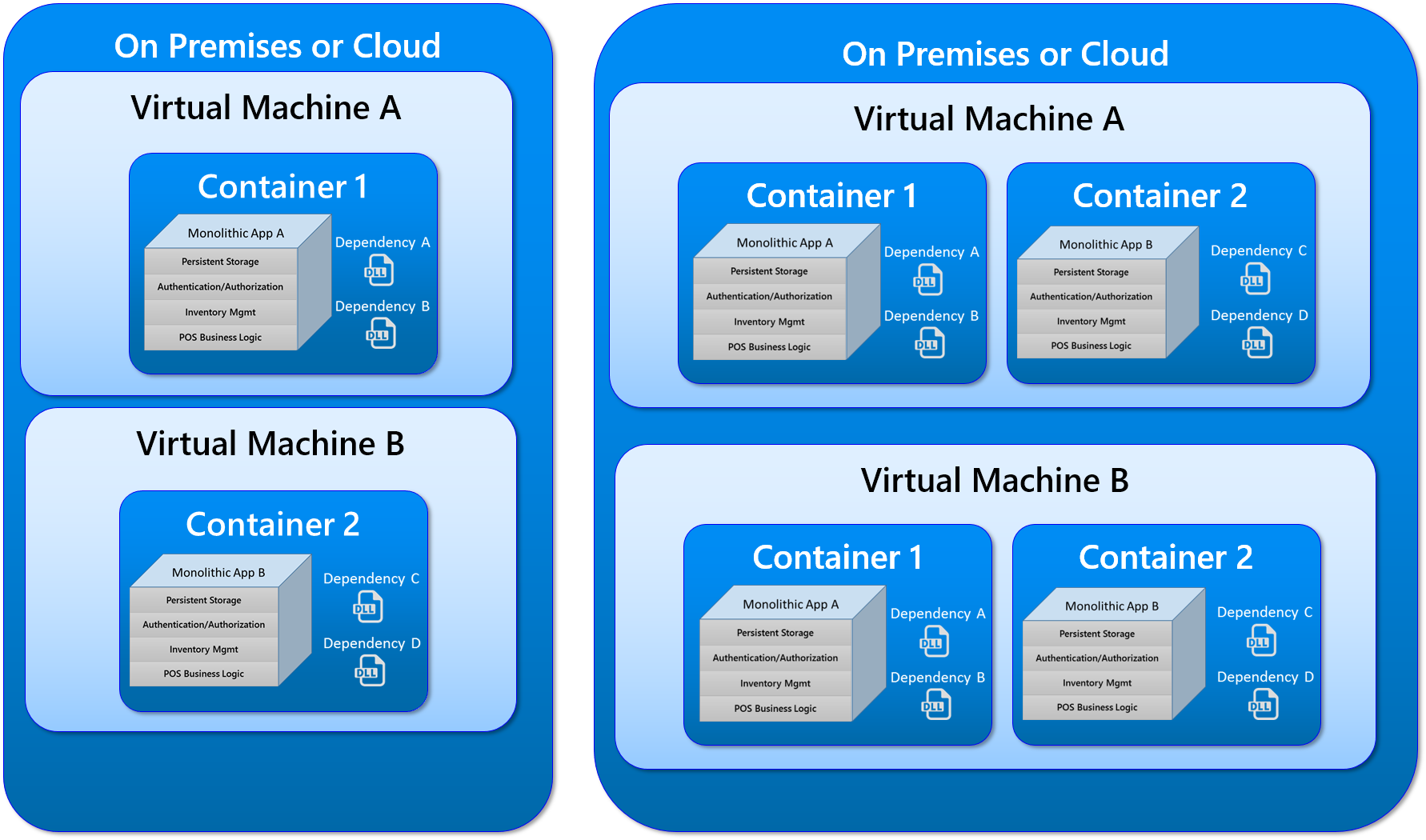 Figure 9: Running in a container

Double your pleasure - At the heart of containerized applications

Re-architecting to a microservices architecture

There are many valid strategies for migrating to a microservices architecture from a monolithic architecture.

To get some background on monolithic architectures, this is a good resource:

Do you have to start from scratch when moving to a microservices architecture?

The good news is that the migration can take place in stages. You can begin by moving an existing monolithic application from a VM into a container. That is just a first step on a journey, not an end goal. You do not need to wait until an app is completely rewritten to starting gaining the benefits of Docker immediately.

Figure 10: The move to Microservices

Over time you can move pieces of the monolithic application as a series of stateless microservices. You are essentially starting with a “lift and shift," with a general and gradual move to a de-coupled services oriented architecture. The development teams can start breaking down the tiers piece by piece. They can move some functions out of the monolith, and begin deploying them as loosely coupled services in Docker containers.

Your new separate, decoupled containers can interact with older, legacy applications as necessary

Over time the entire application is deconstructed, and deployed as a series of portable and scalable services inside Docker containers.

The advantage is that you can take the containerized services and components and run them at massive scale in a data center. With Docker containers, this becomes a pretty straightforward effort. Because Docker containers are inherently portable, and can run in a VM or in the cloud unmodified. In addition, the containers are portable from VM to VM to bare metal without a lot of heavy lifting to facilitate the transition.

You can see below that each store location below is really a separate tenant. There for you need to run a separate monolithic application in a container for each tenant. Imagine a company that has 6,000 stores. That would be 6000 containers. You might argue that you could run multiple containers in a single VM. BUt that might not be feasible given the paragraph below.

Isolated, but not isolated enough

Although containers are not as completely isolated from one another as virtual machines, they are more secure than just running applications by themselves in their own VM. Your application is really more secure when it's running inside a Docker container," said Nathan McCauley, director of security at Docker.

The key takeaway is that each microservice (like Register, Inventory Management, Web UI) is a multi-tenant service completely de-coupled from the other microservices. Here are some characteristics:

Martin Fowler is considered one of the founding fathers of microservice architectures. He cites some pros and cons.

You can read more here: