When data comes back from SQL 2005 and fills a DataGrid or DataView in a VS2005 ASP.Net project is it saved in session or is there a round trip to the database every time?

Data is not stored in session if you bind it to a DataGrid. Under most default conditions it will be stored in ViewState on the page, hence increasing the page size. New ASP.NET data source controls have the ability to also cache data in which case, if it was needed again it would not hit the database but the application cache.

How do I deploy to users who do not have Administrative privilage on their client PC?
Since the application will be saved to Documents and Settings\"User" folder there is not need to be an administrator on the PC.

Will ClickOnce work with Windows 2000?
ClickOnce goes back to Windows 98. Updates will let you pick the version so match it to the version you are running. The only requirement is you need Framework 2.0 on the client not on the server. The bootstraper will handle the update to Framework 2.0. The Prerequisite section will install any number of other things (included) also Framework 2.0

In VS2005 Asp.Net 2.0 is there the ability to do nested or hierarchical grids?

Keep in mind that DataGrid in ASP.NET 2.0 is basically replaced by GridView. When you say nested grids, if you mean similar to how a windows forms handles it if you bind to a dataset and provides basic navigation to the best of my knowledge no. That said you can have a GridView or a DataGrid inside a template column / field on the grid. You can also nest Grids inside of other grids. For more abilities a third party tool like Infragisits grids might be used.
I also spoke with Eilon who is the Software Design Engineer here at Microsoft specializing in Grids and he said that functionality is not in the current ASP.NET 2.0.

Can we have two debug sessions run in unison on one instance of IIS 6 or II7 in using ASP.NET 2.0 pages?

As best I know you can only attach one debugger to a instance of an IIS worker process so I would say no. That said, I have not tried to see if you had two ASP.NET websites that were using the dev web server on different ports if it would care if both were running in debug.

We know that ClickOnce uses bits, what is the minimum OS version which supports ClickOnce?

ClickOnce goes back to Windows 98 where with bits you have to have Windows XP and higher. Updates will let you pick the version so match it to the version you are running.

If it requires bits then what is the baseline OS?
The only requirement is you need Framework 2.0 on the client not on the server. The bootstraper will handle the update to Framework 2.0. The Prerequisite section will install any number of other things (included) also Framework 2.0

In ClickOnce can you stop from going back one version? 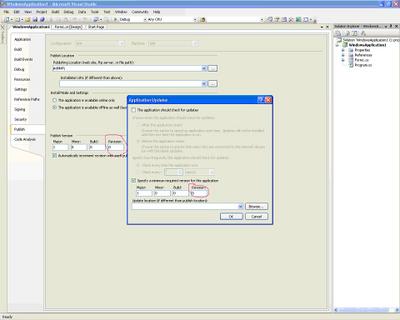 I worked with David Yack, and other internal resources to bring to you the answers I have provided.