In my quest to better understand the interworking of how NTFS stores information on disk, I have been researching what happens to a file as it grows in size and complexity. The reason I’m after this knowledge is so I can better troubleshoot certain storage issues.

Recently, I realized that I’d stuffed my head with enough information to make a pretty good blog. Read along as I explain what I call ‘the four stages of file growth’.

Before we can address file growth, we need to first look at how NTFS works under the covers.

Let’s start out with some basics.

When NTFS stores a file, it starts by creating a small 1KB file record segment that we will call the base record. Every file starts like this, including the special hidden files such as $MFT, $LOGFILE, $VOLUME and so on. In fact when we refer to the MFT (master file table), what we are talking about is the entire list of base record segments and child record segments (explained later) for all files in the volume.

For today, we are just going to talk about some simple text files. You will see it getting complex enough without us doing anything fancy. Here are three base records for three text files.

Before going any farther, it is important to clear up a common misconception on what a file really is. We tend to think of the data in our file as the file itself.

The truth is that data is just one attribute of a file. 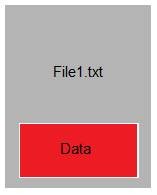 Every file record starts with a header, and then has various attributes, each attribute having its own header. For small files, it is common to find the data attribute last.

Do not confuse these attributes with file attributes like Read-only, Hidden, or System (which are actually just flags). Think of attributes as structures within the file that define things about the file. Common attributes are $STANDARD_INFORMATION, $FILE_NAME, and of course $DATA. 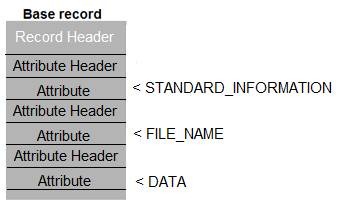 Any space left over in the 1KB record is unused until one of the attributes needs it or a new attribute is added.

I created a small text file with just one line of text in it. This file was so small that it was able to fit all parts of the file into its base record. We call this being resident, as the data for the file resides in the base record segment. This also means that the entire file exists in the MFT. No need to look elsewhere. Everything we need is in that 1KB record.

The diagram shows our 1KB base record segment for the file File1.txt. Inside you can see the data attribute and the file data within it. The file data, also known as the stream for this attribute, is what we as computer users tend to think of when we think about a file. We don’t think about all the structures involved in storing the stream.

Along with the data that we put in the file, you can also see that we have lots of room still left in the 1KB base record segment.

To make the file grow, I just pasted the same line of text into it a few more times. Soon I had the file looking like this....

This was about as big as I could get the file before it was too big to fit into the 1k range of the base record segment. Any bigger and we go to stage two.

Once the data starts to push out toward the end of the 1KB base record segment, the data will be shipped outside and stored elsewhere on the disk. To keep track of where it is, we maintain a mapping pair that tells us the location and length of the now nonresident data. The new location is outside the MFT and is simply an allocated range of clusters.

NOTE: At his stage the file data is nonresident, but the attribute record is in the base record segment. 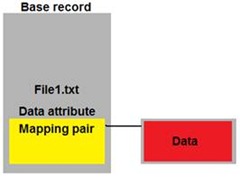 As the file continues to grow we will either increase the length defined by the mapping pair, or if we can’t store the data contiguously, we create more mapping pairs. 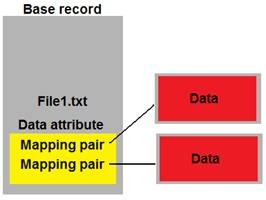 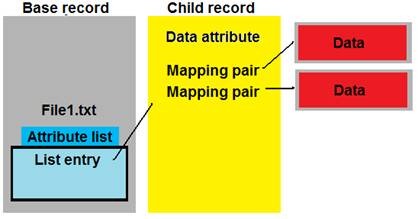 After even more data is stuffed in the file it branches out and creates more child records as needed. Each child record has an entry in the attribute list that points to it.

This is somewhat different than what we did when we moved file data outside the base record segment. When the file data was moved, the new location on disk contained no attribute information. It just had data. If viewed in a sector editor, it would just show lines and lines of file data.

The child records are just that, records. They contain elements common to those found in a base record segment. It will have a MULTI_SECTOR_HEADER and one or more attribute records….along with some mapping pairs. The pairs themselves will point to the allocated clusters that contain actual file data.

The information dumped out of the file gets more complex at each stage. But fear not, it’s almost over.

The dotted line shows the entire stream as it would be virtually. Logically these chunks of data will be found all over the storage device. 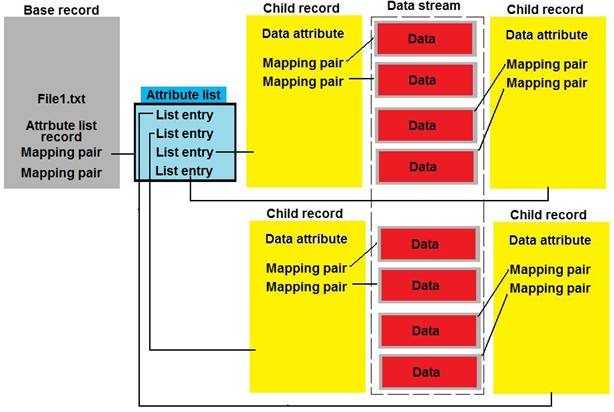 Unlike the child records and the data instances, a file can only have one attribute list and the $ATTRIBUTE_LIST record must reside in the base record even though the list is nonresident.

When the data will no longer fit in the 1KB range, it is moved to another part of the disk. 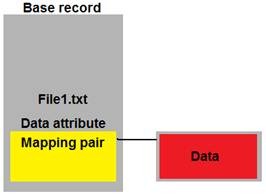 This process can result in multiple mapping pairs. 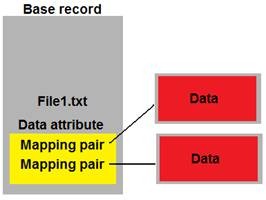 When the mapping pairs are too numerous, they are moved out to form their own child record. 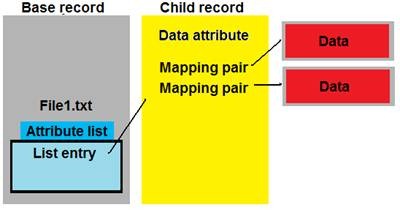 Lastly, when the list of attribute entries is too large to be stored inside the base record segment, the attribute list itself becomes nonresident and moves outside the MFT. 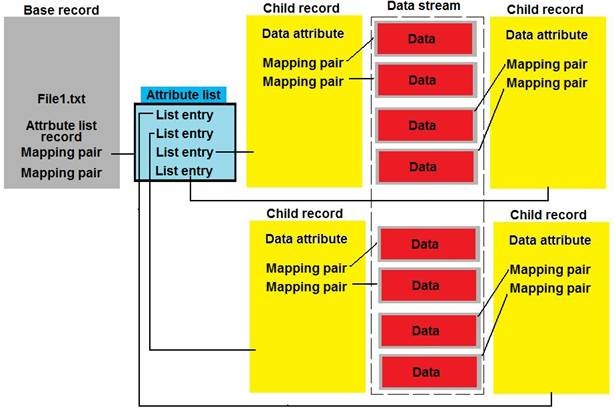 Part 2 of this article has been written.  Please continuing reading for more information on this topic.