Some Reflections About Software Plus Services

Yesterday I held a high level session about S+S at the Basta conference in Frankfurt. After the session I asked some attendees about if the concept (I don't use the term strategy on purpose) became clear. Unfortunately the feedback was mixed. One response I got was even that S+S is not really something relevant for corporations especially for larger ones or enterprises. At this point I realized that I probably did a pretty bad job in explaining the concept as in my opinion it is relevant to everyone using Computers to solve some problem or accomplish certain tasks. This is true especially for organizations. Moreover I would say that most organization are already heavily investing and are implementing aspects of S+S maybe they simply don't know it. This might also be because of the fact that there are many "Services" mentioned in the S+S messaging which are indeed actually targeted at end consumer. So I felt the urge to reflect a bit about all that and try to sum up my thoughts in hopefully easier terms and in a way that the benefits and the conditions under which S+S is relevant to organizations become clearer.
Ok then what is Software plus Services? I think there are basically several statements which lay the foundation of S+S and those are:

Well now I wrote more text than  intended to initially. So I will sum it up once more. S+S describes the principle of creating value adding composite applications by intelligently combining traditional software, locally running applications and remote services in a frontend which offers a consistent and seamlessly integrated user experience across devices and form factors.  S+S is the sum of three well known architectural concepts or technical and social trends (e.g. the way people interact with software) which are namely SOA, SaaS and Web 2.0. 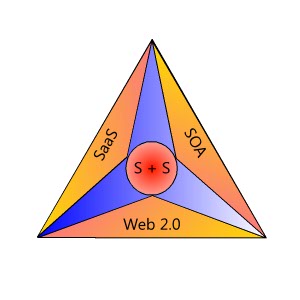 So now if you take a look into the portfolio of Microsoft today you can identify no less than four roles Microsoft has in the S+S ecosystem:

Acknowledging all that we see that S+S is the clamp around those principles and we probably can also acknowledge that Microsoft today is the only company that can deliver technology, products, services and guidance for all the disciplines subsumed under S+S. With having the one of the broadest portfolios in the market today for realizing all what was mentioned above it hopefully becomes clear that Microsoft, of all, is coming up with a special term for all that - Software + Services.

Well a lot of text I hope that anyone read so far and even more I hope that anyone was able to follow my thoughts and is now able to better understand the concept and motivation behind S+S. And as a little incentive for those reading to the bottom you can download the slide deck of my Basta Session by clicking on the image link below (sorry folks it's mainly in German).

And finally a little extra disclaimer which adds to the general disclaimer of my blog:

In the text above I mentioned some Microsoft competitors in conjunction with some critical statements. The intention of those are solely for the purpose of giving the reader a better understanding about the evolution of architectural principles and S+S. They are by no means to be understood as competition bashing or as a try to discredit those companies. In contrary I acknowledge that those companies contributed a lot to the software technology landscape as it exists today.