Command and Query Responsibility Segregation (CQRS) is a software pattern where there is a separation between queries (read) and commands (modify).  CQRS is based on command query separation which is an approach to object oriented design and not a new concept as it first appeared in the late 80's in Bertrand Meyer's book Object-Oriented Software Construction.  The pattern is to define entities into clear responsibility of either returning results and not changing state or changing state and not returning results.

As an illustration, take a simple entity that maintains inventory:

Would now look like this following a CQRS approach:

Hmm... is that it? Pretty much. But there are always subtle details to figure out!

Object Oriented Design (OOD) is an approach that allows us to design software to solve complex problems by breaking the complexity down into smaller interacting entities.  OOD has many patterns and concepts that translate well to Service Oriented Architecture (SOA) and building solutions using microservices.

CQRS is a pattern that can be applied at the object level, service and server level.

The initial IInventoryQueryService above is at the object level but the approach could be applied to how services are constructed as well as how those services are hosted.  This series of posts considers the impact at the service level primarily when the services are isolated and only share a common repository (re., the database).  This is illustrated below: 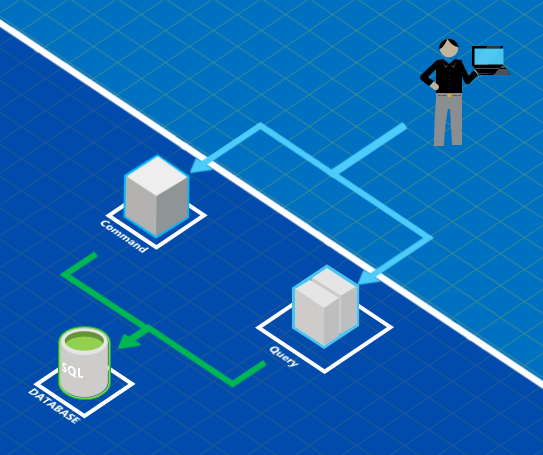 There have been many posts about avoiding CQRS and this series of posts does take liberties about the definition of CQRS so it is probably a good idea to stress the point that this is not about splitting a single entity service into a command service and an update service.  Instead the pattern of CQRS here is about complex models where the view and/or the maintenance is distributed among different and potentially isolated sections of a solution.  The intention is to provide guidance and/or concepts to aide the single monolithic solution developer/designer transition to microservices.

CQRS does fit well with some scenarios and has some compelling factors behind it:

CQRS can be a good pattern to apply for task based or event driven systems especially when the solution is composed of multiple applications and not a single monolithic website or application.  It is a pattern and not an architecture so it should should be applied in specific cases and not in all business scenarios.  The last statement is assuming an organization's IT strategy is driven by business need and not IT technology or architecture (known as the follow the latest trend strategy).

In Service Oriented Architecture (SOA), CQRS would be implemented within a business component and fits well in event driven scenarios where the command service benefits from being separate from the query service.  In the early days of SOA, this was often combined with having an enterprise service bus (ESB) used to notify the query service when the update service made changes to some shared model or repository.

The Bounded Context of Domain-driven design (DDD) defines the interrelationships within a complex domain.  Contexts showing clear separation between query and command would most likely be more suited than contexts where the separation does not exist.  For example, take a car dealership.  The view of a customer from the bounded context of sales would be different from the context of service though they might share some of the same models:

The diagram shows that from a sales perspective, a view of customer is different as the business is more concerned about potential opportunities to sell a new car than what service has been done to their existing ones.  The temptation might be to build an over-arching view of the customer that supports both views and allows for both opportunities and vehicle history to be updated but imagine that the car dealership wants all potential opportunities visible across all locations where service related information should be limited to just a single location.  Two different views, maintenance of different information, independent scaling and isolation... this would be a good candidate for CQRS.

Without repeating great posts by Martin Fowler, Greg Young and Udi Dahan, this post provides background for an illustration of CQRS in Azure using Azure Functions, Azure Webs and Azure SQL Server.  For more context of CQRS, the following is recommended:

The next post, CQRS in Azure - Part 2, will take a fictitious inventory solution and apply the CQRS pattern using Azure Functions.