Protecting you from malware

One of the things we talk quite a bit about with Windows 8 is making sure Windows is a safe, secure, and reliable computing environment. We have always provided a broad range of solutions for achieving these goals and work closely with a broad range of industry partners. We continue to enhance these capabilities with Windows 8 while making sure you always have choice and control over how to protect and manage your PC. With Windows 8 we are extending the protections provided by Defender to address a broader range of potential threats. Jason Garms, the group program manager of our reliability and security team authored this post that represents work across several teams. --Steven

A view of the current landscape

Criminal attacks continue to evolve and malware has become their standard weapon against anyone who uses the Internet—on traditional form-factor devices, as well as on mobile devices like tablets and phones. Malware targets all operating systems and browsers, and in recent years, criminal attacks against applications have increased substantially.

Criminals also use social engineering to trick you into performing actions that put you at risk. An increasingly common social engineering strategy uses online advertising campaigns to lure you to a site that installs malware on your computer.

An economy has developed around building reliable vulnerability exploits, which criminals buy to help distribute their malware. Criminals make money from their malware, so they invest in ways to keep it alive such as producing a higher quantity of malware, updating it more frequently—e.g. multiples times each day—and increasing its size and complexity. Some malware is as complex as commercial applications.

We use the Security Development Lifecycle (SDL) to build Windows with the best security design, development and testing practices available. Some highlights include:

Making it harder to create an exploit on Windows 8

With Windows XP SP2, we began creating defenses called mitigations that make it difficult to develop reliable exploits for security vulnerabilities. Each subsequent version of Windows has continued to expand and improve on these mitigations, because a single mitigation feature can break an entire class of exploits. Windows 8 includes mitigation enhancements that further reduce the likelihood of common attacks. Some of these improvements include:

Keeping malware off your PC

Having effective malware protection is important for any device connected to the Internet and almost all Windows PCs sold today include a traditional antimalware solution, though it is often a time-limited or trial version.

Shortly after Windows 7 general availability in October 2009, our telemetry data showed nearly all Windows 7 PCs had up-to-date antimalware software. However, a few months later the trend started to decline month-to-month, likely reflecting antimalware trial subscriptions expiring. A year later, at least 24% of Windows 7 PCs did not have current antimalware protection. Our data also shows that PCs that become unprotected tend to stay in this unprotected state for long periods of time. And when antimalware software is even one week out of date, its ability to protect against new malware drops significantly.

We believe that all Windows 8 users should be protected by traditional antimalware software that provides an effective, industry-recognized level of protection. There are a lot of great antimalware solutions available that we expect will be updated to protect Windows 8 PCs and we believe most PC makers will continue to ship Windows PCs with these solutions installed.

If you don’t have another solution installed, Windows 8 will provide you protection with a significantly improved version of Windows Defender.

Improved protection for all types of malware. The improvements to Windows Defender will help protect you from all types of malware, including viruses, worms, bots and rootkits by using the complete set of malware signatures from the Microsoft Malware Protection Center, which Windows Update will deliver regularly along with the latest Microsoft antimalware engine. This expanded set of signatures is a significant improvement over previous versions, which only included signatures for spyware, adware, and potentially unwanted software.

In addition, Windows Defender will now provide you with real-time detection and protection from malware threats using a file system filter, and will interface with Windows secured boot, another new Window 8 protection feature.

When you use a PC that supports UEFI-based Secure Boot (defined in the UEFI 2.3.1 specification), Windows secured boot will help ensure that all firmware and firmware updates are secure, and that the entire Windows boot path up to the antimalware driver has not been tampered with. It does this by loading only properly signed and validated code in the boot path. This helps ensure that malicious code can’t load during boot or resume, and helps to protect you against boot sector and boot loader viruses, as well as bootkit and rootkit malware that try to load as drivers.

We’re continuing to work with antimalware partners during the Windows 8 development process so you have the best possible Windows PC experience no matter what antimalware solution you choose. We provide them with resources, such as the technical details of how we architected the performance improvements for Windows Defender, so they have the opportunity to make similar improvements to their products.

Microsoft SmartScreen for Internet Explorer and now for Windows too

Windows 8 will help protect you with reputation-based technologies when launching applications as well as browsing with Internet Explorer.

In Windows 7 when launching these downloaded applications, you get the following notification: 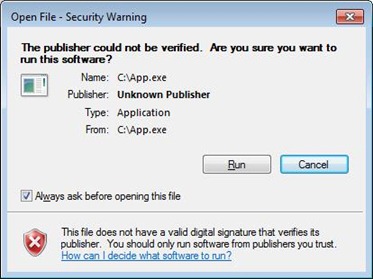 In Windows 8, SmartScreen will only notify you when you run an application that has not yet established a reputation and therefore is a higher risk:

The user experience for applications with an established reputation is simple and clean: you just click and run, removing the prompt you would have seen in Windows 7.

SmartScreen uses a marker placed on files at download time to trigger a reputation check. All major web browsers and many mail clients, and IM services already add this marker, known as the “mark of the web,” to downloaded files.

We expect average users to see a SmartScreen prompt less than twice per year and when they do see it, it will signify a higher risk scenario. Telemetry data shows 92% of applications downloaded via Internet Explorer 9 already have an established reputation and show no warnings. The same data shows that when an application reputation warning is shown, the risk of getting a malware infection by running it is 25-70%. And SmartScreen gives you administrative controls to prevent your non-techie friends or children from ignoring these warnings.

We’ve seen dramatic results with this approach in Internet Explorer and we’re happy to bring it to a broader set of Windows scenarios.

Here’s a video that shows you Windows Defender and SmartScreen URL and application reputation in action:

In conclusion, we’ve taken a very broad approach to improving the level of protection you’ll get from malware in Windows 8, including the use of SDL processes to be secure by design, the implementation and upgrading of mitigations to help protect you against exploits used by malware, improvements to Windows Defender to provide you with real-time protection against all categories of malware, and the use of URL and application reputation to help protect you against social engineering attacks.