You probably heard that Visual Studio 2015 and .NET Framework 4.6 released today. Congrats team! This is a big day for us as we’ve all been working really hard on this release for many many months. Get the bits now!

I had the pleasure of showing off the awesome productivity, debugging and diagnostic tools kicking off the launch keynote with Soma. That was pretty darn fun. I personally thought I was wearing too much makeup but that’s what studio people make you do ;-). Amanda Silver and Scott Hanselman also joined Soma on stage to show off a slew of mobile and web development tools. Scott also touched on new features in C#, ASP.NET 5 and .NET Core which is our open source & cross-platform stack. If you missed it, definitely check it out.

By the way, I mentioned at the end of my demo that Roslyn (the .NET Compiler for VB & C#) is on GitHub. There’s actually a lot of activity on GitHub. Check out our repos and contribute!

I have to say that this was one of my favorite Visual Studio launches ever – and I’ve been using Visual Studio for a very long time. What was really special about it IMO was we really showed our customers how we’ve embraced open source and open development. It’s been a big culture change for us and we’re excited for the future. It’s a great time to be a developer! Watch this short video on how we build Visual Studio, many parts out in the open. I am so proud to be on this team.

And thanks for all the encouraging comments on twitter! Sometimes, while I’m battling my nerves and trying to remember all the right keystrokes on stage, I forget how I may be inspiring other developers, especially young women developers, to do their best work. It’s humbling to say the least. 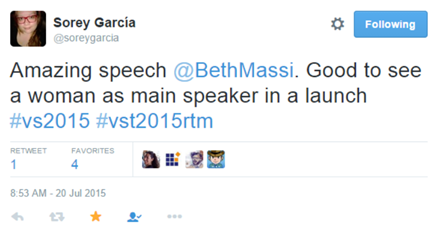 Oh and all of you asking for my .NET T-shirt, you can grab the artwork from the .NET Foundation SWAG repo as well as order stickers from sticker mule. And if you have more artistic ability than your average developer like me, submit a pull request and we’ll get you onto your own stickers too! (T-shirts coming soon. UPDATE 7/22: Order T-shirts here! https://dotnet.spreadshirt.com/).

What I personally found most inspiring was the app building our teams did for Humanitarian Toolbox (www.htbox.org), a charity supporting disaster relief organizations with open source software and services. I first learned about HTBOX from Bill Wagner, who’s also on the advisory council for the .NET Foundation. It was amazing to see many teams at Microsoft come together and use our tools and technologies for such an important cause. Read more about the project called “allRready” and get involved.

It’s a big day for us on the Visual Studio team. Thank you all for your support and for being awesome developers!