candle protest in Korea marks 55 days and still going on

The president’s strategy to bash who doesn’t favor the government is failing as the religious bodies join the candle protest. The government tried to disrespect the protest by distorting calling them extremists and blaming them with lies and using wrongful force (no miranda, no specific suspicion and random) but both of these core key elements they’ve been using can’t be used for now on religious bodies especially when they have international influence. 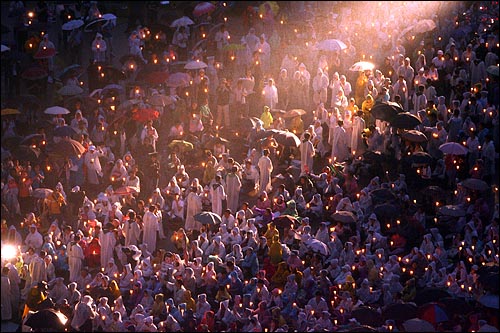 Today “the catholic priests’ association for justice” celebrated a mass for the country. They have been fasting for the governments censure and wrongdoings during the 55 days of protest. The preyed for all the people that attended the protest and the 900+ people that got arrested. The buddhists are scheduled to gather with the candle protest on friday.

Meanwhile, the human rights group Amnesty International has sent an investigator “Norma Kang Muico” to Korea to look into the incident whether there were any violation of human rights during the forced suppression of the candle protest. Amnesty International already have been saying that the authorities should investigate the excessive force. I really hope that all the sins get attention and the government could acknowledge and apologize and further more change their stance to favor the people(other than the rich and powerful people they’ve been favoring). Of course, that includes not faking apologies as did before.