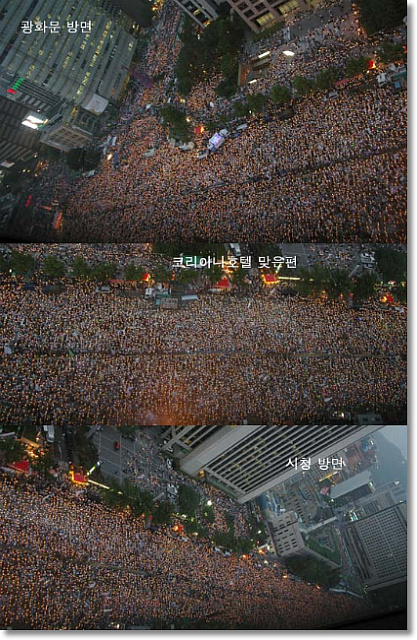 Hundreds of thousands of candles of hope. How could any President ignore this, blame this in a country of democracy? The cabinet has submitted their resignation, but the President says nothing useful. Still no appologies or any policy change.

Here’s what he actually said that day:

Is this a joke? Who should really resign?

The police blames the people for desecrating the Korean flag. The media reported that it wasn’t the people who put the flag but got phone calls from the police that they are distorting the truth. After a citizen uploaded a video showing the police putting up the flag by their own, they changed their words and sent a new presskit.

Compared to the protest being 500~800 thousand, the people favoring the President had less than ten thousand gathered. The major media(Chosun, JoongAng, DongA) “again” distorts the protest story and reports this as a “vs” situation. I didn’t see even one anti-protesters that day. Also there was absolutely no reference to any anti-US whatsoever, but those papers reports the possibility. These kind of distortion is being recognised among the people and resulting in income decrease for those media. They are blaming their income decrease using more distortion.