BranchCache enables remote offices to have centralized access to file-shares over the wide area network at faster speeds and using less bandwidth. Included in Windows Server 2012 and in some editions of Windows 8, BranchCache is part of a collection of solutions known as “wide area files services” or WAFS solutions.  These type of solutions can be expensive but are included in the box with Windows Server.  Content is stored either on servers that are configured to host the cache or on client computers that are running Windows 8 or Windows 7 when no server is available in the branch office. After a client computer in the branch office requests and receives content from the main office, content is cached at the branch office so that other computers at the same branch office can obtain the content locally rather than downloading the content from the content server over the WAN link.  This solution is also optimal for those organization who have satellite offices connected by LTE or other cellular technology who's data rates could be kept at a minimum should data only be downloaded once as opposed to per request.

BranchCache has two modes of operation as illustrated below: 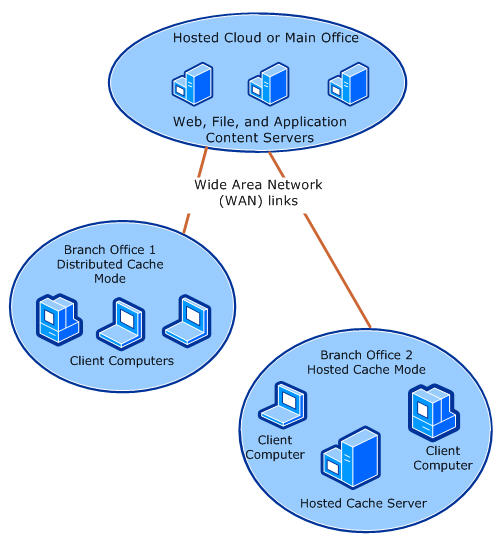 Or the BranchCache feature on your lab server via the Add Roles and Features Wizard found in Server Manager.

Configuring the Windows 8 client to use BranchCache

You organization will now be able to capitalize on bandwidth optimization with the enablement of BranchCache.