With PDC just about a week over, it's about time I finally got around to blogging about it. Here's the random list

Windows Azure: Ray Ozzie launched Windows Azure and Microsoft's Cloud Strategy (video here). Charles on Channel 9 did a bunch of videos on our Cloud services. If you want a no nonsense explanation of Windows Azure, check out the interview with Manuvir.

For a great recap on the Windows Azure, check out Dare Obasanjo's blog.

Azure is that for developers building public-facing Web sites, this is a no-brainer, assuming they get the monetization story right.

That being said, a number of enterprise customers that I spoke with at the conference said that the primary workloads they're doing are within the firewall and hosting data/computation outside of that is a non-starter. This is especially true with customers with sensitive data (government, financial vertical, biotech,etc). While I have zero knowledge of what the teams are actually working on (read: I know nothing), if Microsoft can either release software or partner with HP/Dell/etc, having a Microsoft Cloud appliance or Cloud software license would definitely be a big hit for that segment of customers. This isn't too far fetched as you're seeing teams discuss providing mutliple tiers of service where you can either pay for software as a service (Exchange Online, SQL Server Data Services) or host them yourself (buy a product license and run it yourself).

The other interesting aspect in looking at the PDC announcements is the difference in strategy amoungst VB and C#. Instead of having each language be good at certain scenarios (VB for Office interop for example), since the language teams have merged and the goal is to have feature parity. This is interesting in that many of the new features for VB were features that already existed in C# (collection initializers, auto-properties, etc) and the reverse is also true (C# gets VB features like optional parameters, named parameters, etc).

While Dare jokingly referred to this as "boring enterprise stuff", the killer feature for me is that Service Bus enables Point A to talk to Point B easily even if both clients are behind firewalls (NAT firewall traversal). One of the chapters in our upcoming Coding4Fun book is PeerCast which lets you stream video from one PC to another PC using PNRP. The problem with PNRP is that in many cases it won't work because you can't see the global seed cloud or your router doesn't support it amongst other troubleshooting issues. If Service Bus "just works" and it has both low-level and high-level APIs to exchange data between peers, then it's definitely going to be of use to Windows developer.

BI in the Cloud is coming

While not currently available, SSDS is going to add business intelligence (analysis services, reporting, data mining) to the cloud and that is going to be a killer feature. If you like Google Analytics, imagine having Google Analytics on steroids for every piece of data your company captures. I'm definitely looking forward to this given that it's very difficult to find a hoster that provides BI solutions from *any* vendor today. It will be interesting to see how Sun (MySQL), IBM (DB2) and Oracle respond to this.

Brian Keller and I got called out as "pure evil" by Scott Hanselman in his excellent .NET Framework 4.0 Overview session at PDC for our now infamous prank on This Week on Channel 9 where we asked our viewers to vote up adding MMO features to BabySmash! (who doesn't want baby vs baby). 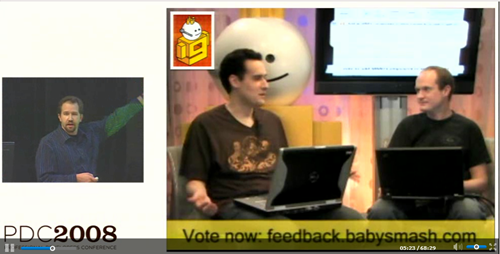 The great thing about PDC is that all of the videos are available online (streaming + download) from. This of course means that I have a massive backlog of video content to watch.

You can watch our Coding4Fun session online with with Clint Rutkas, Brian Peek, and Scott Hanselman here. I have the C# version of InnerTube up and I'll have the VB version up soon too.

One of the best parts about going to PDC is getting to see old friends or people I've only met through email/forums/twitter in person. Shout-outs to everyone who stopped by the Channel 9 & Coding4Fun Lounge.

Speaking of people, Sara Ford hosted a Codeplex meetup at PDC that I think we'll be posting the video