Go to Amazon.co.uk to pre-order Martin Calsyn's book on Robotics Studio.  I'm guessing it will also be available in other coutries at Amazon and other retailers. 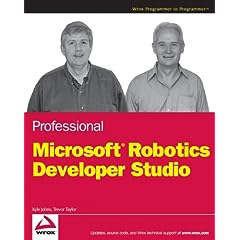 The book is described as a hands-on guide with topics including:

A Robotics Studio CTP available for download here.  It includes a development platform with visual programming tool for creating and debugging robot applications.