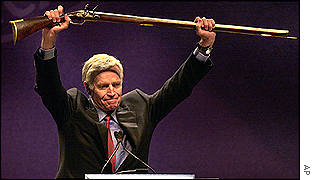 LOL, I thought I’d sample Mike Moore’s sensationalist style and use the title of this book as my post heading. I wandered down to Dymocks on the weekend, to see if I couldn’t find a good book to read. I eventually had to take a break from Critical Mass by Philip Ball, after I still couldn’t get past the fifth chapter (the book rocks, but is really intense), and picked up Michael Moore Is A Big Fat Stupid White Man by David T. Hardy and Jason Clarke.

The book is a deconstruction of Michael Moore’s “documentaries”, and pretty much expatiates all the condensed snippets the viewers is privy to in Mike’s movies, and gives you the greater context. For example, there is that infamous scene in Bowling for Columbine (BFC) where Charlton Heston has a gun raised above his head while he bellows, “from my cold, dead, hands”. Turns out, it’s not exactly the way we saw it.

In BFC, after watching it the first time, I was under the impression that Charlton Heston had said that as part of his speech in Michigan, just after the Columbine tragedy. I was thinking, man, he is one cold dude. But it turns out, he didn’t even say that then. He actually said it almost a year later.

So I did a quick search on the web, and found this article with looks to be the first CNN story on the Columbine shooting:

It’s dated April 20, 1999. So I’ve got that time-line. The next article is one I found on Hardy’s website, it’s a link to an article that gives the context to Charlton’s speech.

It is dated May 21, 2000. So, I suppose, yeah, it’s one year later, which makes me a little peeved at Mr. Moore, as I pretty much put two and two together after watching BFC, and came up with a giraffe!

I then searched for Heston and “From my cold dead hands”, and found this article on BBC’s website:

It’s dated May 20, 2001. Hmm, so now I’m a little confused…how often does Charlie hold a musket above his head and yell that classic “cold hands” line? Well, turns out, pretty much every NRA annual meeting.

So then, BFC was released in 2002. This left me to wander why that little point wasn’t explained to the viewer, considering that in about 3 minutes, I was able to discover that Charlie has a recurring penchant for hoisting muskets above his head and yelling crazy talk, yet, in Michael Moore’s BFC, I’m led to believe that Charlie delivered that little gift purely for the benefit of the poor folk of Columbine.

Anyway, I’m still reading, and getting more annoyed at being led down the garden path by Mr. Moore, and am getting even more convinced that the truth can only be what you’ve experienced with your own eyes and ears (even that’s not always reliable though ;)).