As expected, OASIS members have approved ODF 1.2 as an OASIS Standard. Although the official announcement from OASIS hasn’t been posted yet, Rob Weir (chair of the OASIS OpenDocument Technical Committee) has a blog post with information about ODF 1.2 and those who have contributed to it.

As Rob notes, many people from around the world representing many organizations contributed to ODF 1.2. Here’s a Wordle of the attendees of every ODF Technical Committee (TC) call in the final year of ODF 1.2’s development: 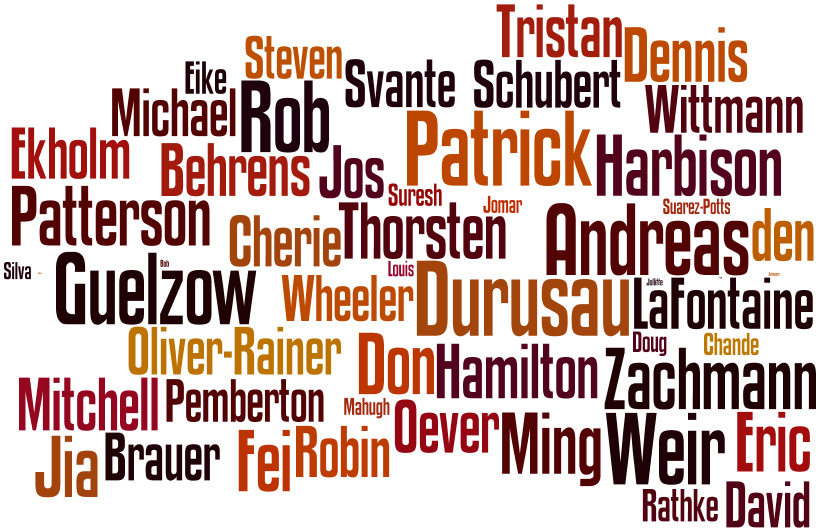 Microsoft has supported ODF since Office 2007 Service Pack 2 and formally joined the ODF TC in early 2008.  . I’ve attended many meetings myself, and my colleague Cherie Ekholm, Senior Standards Professional, has been active in the ODF TC as well as the OIC (ODF Interoperability and Conformance) TC since 2009.

We’ve also had some great support from others in broader Microsoft Office team who have made significant contributions to ODF 1.2:

Going forward, we’ll continue partnering with the ODF TC on the next version of ODF, informally referred to as ODF v-Next. Another colleague of mine, John Haug, Standards Professional,  has been working with the Advanced Document Collaboration SC for the last nine months to help figure out how to address change tracking in ODF v-Next, and he has written a proposal for extending the existing ODF change tracking, including many specific examples of how to handle the use cases that the SC has defined for change tracking.

Even as work on ODF v-Next proceeds in OASIS, ODF 1.2 is expected to be submitted to ISO/IEC for consideration as a new ISO/IEC standard.  This will provide the global standards community with an opportunity to review the standard out of OASIS, provide any comments and suggestions for improvement they may have, and ultimately decide whether to ratify it.  ODF 1.2 may be modified by this work, but we have every reason to be optimistic that ODF 1.2 will be ratified by ISO/IEC at the end of the process.

At Microsoft, we are committed to ensuring that Office customers are able to choose the format that best meets their needs.  As a result, we will continue to give them a range of format options, including ODF.  We are also sensitive to our customers’ need for long term usability and minimal cost when it comes to using new versions of the formats we support.  That is why we are active in the maintenance of ODF, PDF and OpenXML and tend to want to support stable versions of formats that have emerged from the standardization process.

We look forward to continuing our participation in the evolution of ODF. Congratulations to the entire ODF community on the approval of ODF 1.2 as an OASIS standard!