More adventures with Orcas on Longhorn

Let's be clear from the start, if you read the readme.htm (which I did, uncharacteristically) for Orcas Beta 2 it does not list Windows Server 2008 as a currently supported operating system so I can't blame anyone else for my pain....

So despite the warning signs I ploughed ahead anyway to install Orcas Beta 2 to on my main system which was running Windows Server 2008 Beta 3. As I reported a couple of days ago I had what seemed to be a minor problem initially with beta 2 which I managed to fix.

However it turned out that this was really just a lesser symptom of a more complex (though simple when you understand it) issue.

I discovered, on trying to create an AJAX enabled web site, that I could not compile it. Again I got the dreaded  "Unrecognized tag prefix or device filter 'asp' " error and this time I also got an error that "the type System.Web.UI.IScriptManager could not be found in assembly System.Web.dll version 2.0.0.0" . Sure enough, a bit of reflecting showed clearly that I did not have that type in my System.Web.dll which (located in my 'D:WindowsMicrosoft.NETFrameworkv2.0.50727' directory) showed as being version 2.0.50727.1320.

After some further messing around to try and fix this, by uninstalling and reinstalling ASP.NET Futures June package (though I'm not saying that broke it, as I messed around with a number of things), I also managed to lose all controls from my toolbox:

No amount of uninstalling, reinstalling, running devenv.exe /setup etc would restore them.

So, asking around a bit one of the developers helpfully suggested that IScriptManager did not used to be in earlier versions of System.Web.dll and that beta 2 should bring me up to version 2.0.50727.1378. I checked with a colleague Carlo who had beta 2 installed and sure enough he had version 1378.

Hmm, so how come I've been short changed and only have version 1320?

After much gnashing of teeth and pulling of hair the answer became apparent. In Windows Server 2008, the Microsoft .NET Framework 3.0 is included as part of the OS and this includes the updated core 2.0 runtime known as 'Redbits'.

So the bottom line is that Orcas beta 2 is not supported (read 'won't work') on Windows Server 2008 beta 3. If you are part of the preview program for Longhorn you may have access to the June CTP build in which case you can install Orcas beta 2 and it will work.

After installing the June CTP of Windows Server 2008 my Redbits were up to version 1373 and running and my toolbox was back to normal: 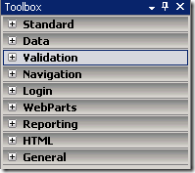 But hang on. Where are the AJAX Extensions?

Then I realised that this time it was user error - I'd tripped myself up on one of the new features or Visual Studio 2008 - multi-targetting. When you create a new project you can now choose which version of the framework you want to target and the IDE will only show you those features that are applicable. In my case I had accidently left the choice from the last project I had created:

Once I selected 3.5 as the target:

I had my toolbox items back to the way they should be: 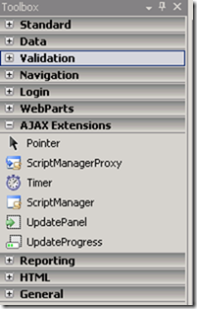