Over the past week we have seen a little bit of blogosphere activity regarding Windows 7 and batteries, specifically the new Windows 7 message “Considering replacing your battery”. Since this is related to the engineering of Windows 7 we’re going to use this blog to provide an update to people. As we have talked about many times, we have a relentless focus on the quality of Windows 7 and we take seriously any reports we receive that indicate a potential problem that could result in a significant failure of the OS. In a previous post we talked about the steps we take when we receive a bug report, in particular when we start to see several reports that appear to be the same. For the past week or so we have been diligently working through these steps and more to see if there is anything in Windows 7 we need to address regarding this issue. At this time we have no reason to believe there is any issue related to Windows 7 in this context.

Several press articles this past week have drawn attention to blog and forum postings by users claiming Windows 7 is warning them to “consider replacing your battery” in systems which appeared to be operating satisfactorily before upgrading to Windows 7.  These articles described posts in the support forums indicating that Windows 7 is not just warning users of failing batteries – as we designed Windows 7 to do this – but also implying Windows 7 is falsely reporting this situation or even worse, causing these batteries to fail.  To the very best of the collective ecosystem knowledge, Windows 7 is correctly warning batteries that are in fact failing and Windows 7 is neither incorrectly reporting on battery status nor in any way whatsoever causing batteries to reach this state. In every case we have been able to identify the battery being reported on was in fact in need of recommended replacement.

Using all the tools at our disposal including contacting customers reporting this issue on forums, customer service communications, partnerships with our PC makers, and of course the telemetry in Windows 7, we have been monitoring reports and discussions regarding this new feature, trying to separate reports of the designed behavior from those that might indicate an issue with Windows 7.  In the latter cases we are trying to understand the scope of applicability and obtain hardware on which to reproduce a faulty behavior.   To date all such steps indicate that we do have customers seeing reports of battery health issues and in all cases we have investigated Windows 7 has simply accurately detected a failing battery.   Before I go into our status on this particular issue, we should review the details behind this new feature.

One of the most obvious components of PC battery life (the runtime you get on battery power) is the battery itself. PC batteries inherently degrade in their ability to hold a charge and provide power (as is the case for all rechargeable batteries). The cause of this is complex and includes irreversible changes in battery chemistry, and increased internal resistance among other things and those in turn are dependent on the design and manufacturing of the battery. This degradation translates into less battery life for the user over the life of the battery in the PC.  Ultimately, batteries must be replaced to restore an acceptable battery life.  A quick check of mainstream laptops will show that batteries usually have a warranty of 12 months, which is about the length of time when statistically we expect to see noticeable degradation (meaning that you start to notice the need to charge more frequently). Those of us that have owned the same laptop (or mobile phone, or music player, or anything else with rechargeable batteries) for a couple of years and taken it through regular charge cycles have no doubt “felt” the decline in battery life though we might have attributed to any number of factors since we did not have any information available to us otherwise.

Windows 7 makes use of a feature of modern laptop batteries which have circuitry and  firmware that can report to Windows the overall health of the battery. This is reported in absolute terms as Watt-hours (W-hr) power capacity. Windows 7 then does a simple calculation to determine a percentage of degradation from the original design capacity. In Windows 7 we set a threshold of 60% degradation (that is the battery is performing at 40% of its designed capacity) and in reading this Windows 7 reports the status to you.  At this point, for example, a battery that originally delivered 5 hours of charge now delivers, on average, approximately 2 hours of charge.  The Windows 7 the notification is a battery meter icon and notification with a message “Consider replacing your battery”.  This notification is new to Windows 7 and not available in Windows Vista or Windows XP. 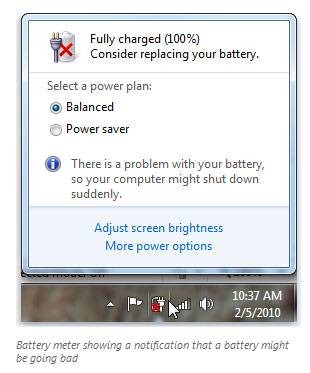 As mentioned, every single indication we have regarding the reports we’ve seen are simply Windows 7 reporting the state of the battery using this new feature and we’re simply seeing batteries that are not performing above the designated threshold. Below we’ll talk about the data we have to support this point of view. It should stand to reason that some customers would be surprised to see this warning after upgrading a PC that was previously operating fine. Essentially the battery was degrading but it was not evident to the customer until Windows 7 made this information available. We recognize that this has the appearance of Windows 7 “causing” the change in performance, but in reality all Windows 7 did was report what was already the case.

The following data points contributed to our understanding of the reports we are seeing. Please keep in mind that all the telemetry we see is opt-in, anonymous, and respects our privacy policy.

This data would confirm our point of view that we are seeing nothing more than the normal course of battery degradation over time. The transparency provided in this new Windows 7 feature produced a notice that previously was not available to customers and did so shortly after upgrade. This is the root cause of the urgency with which we’ve seen postings, but does not change the reality of the condition of the battery. We have no confirmed cases of new machines with the as-purchased batteries.

As we always say with regards to any reports on the quality of Windows 7, we are going to continue to be diligent and use all the tools at our disposal to get to the bottom of a report that has the potential to require a code change we would distribute to customers. We are as certain as we can be that we have addressed the root cause and concerns of this report, but we will continue to monitor the situation. In particular, we will continue to have focused communication with our OEM partners as they monitor their customers and PCs over time.

Finally, if you believe you are receiving this error and your battery is new or believed to be in great shape we would encourage you to report this to us or your original PC maker. You are welcome to send me mail through the contact form on this page, use the TechNet forum, the Microsoft Answers forum, or visit support.microsoft.com where you can get additional information about how to contact Microsoft assisted support in your region.