Microsoft Azure CosmosDB is an umbrella over different database services. One of them is the schema free database service called DocumentDB. You can read about it here, it has many great features and components. One of them is "change feed" which represents the feed of changed documents (upserts, replace) . The client component exposing this feed is called change feed processor.

Change feed processor works by querying DocumentDB collection for changes. Then, it outputs the list of documents to the registered observer in the order in which they were modified. The observer can process the changes. After observer processed last document from the batch, the change feed processor could checkpoint (persists) the pointer of last document from the batch into the lease document (optional). The whole process then repeats.  That's all folks!

We use change feed quite heavily. It our core component. We built an event sourcing system with capture state pattern but I'll write about it in future posts.

Now, let's focus on the change feed processor itself and what's possible with this component.

Microsoft recently released new version (2.0.4) of change feed processor package.  It's client side library built on top of DocumentDB SDK. The source code is located here. I'm one of the contributors to this project.

The newly released package changed the new major package version, 2.x which means there were major changes, refactoring, etc. Upgrading the package from 1.x is seamless but there will be several warning messages generated about obsolete interfaces/classes usage.

The following picture shows the idea behind the scene.

As you can see, there are 3 parts which need to be provided from the developer's perspective:

Creating this whole machinery was changed and provides you different extensibility options. That is the focus of this series of blog posts about change feed.

I created whole sample showing this in the action. Source code is at https://github.com/kadukf/blog.msdn/tree/master/CosmosDB/ChangeFeed/Sample1/DocumentDB.ChangeFeedProcessor.ConsoleApp  The sample requires local Azure CosmosDB emulator  running. The sample console application ensures that the database with feed collection (Input) as well as lease collection (Input.Lease.ConsoleApp) is created. 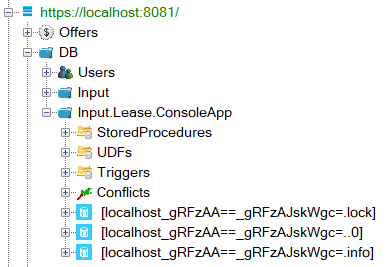 The console observer logs  when the partition processing is "opened", "closed" as well as when the documents are dispatched for processing.