Butterfly Effect in Software Testing (its happening all the time, did you ever notice)

Example: The phrase refers to the idea that a butterfly's wings might create tiny changes in the atmosphere that may ultimately alter the path of a tornado or delay, accelerate or even prevent the occurrence of a tornado in a certain location.

Example: A tiny misinterpretation or misrepresentation of a customer expectation in the form of requirement can ultimately impact the analysis, design and code, testing in such a way that it might result in a product failure or in worst case business failure sometime

here tiny change in requirement can be compared with butterfly's flapping of wings and because this change was not detected in the requirement stage and it keeps on passing through analysis, design and coding phase and finally gets so much amplified that the impact becomes a huge loss to the business.

One of my friend had been asked in an interview "what is Domino effect in software testing?"   He didn't know and hence couldn't answer.

It is again related to Butterfly effect and Chaos theory that a small change anywhere in the system (requirement, analysis, design, code, testing) can cause a similar change nearby and that will another similar change and so on in a linear sequence. 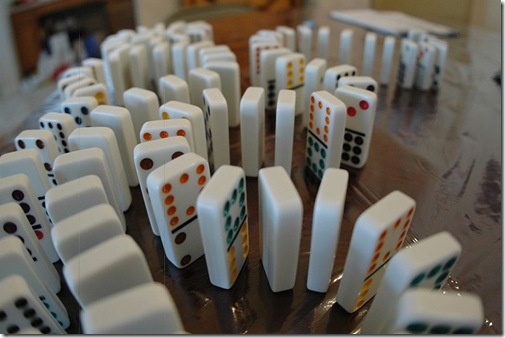 Interesting fact: The term is best known as a mechanical effect, and is used as an analogy to a falling row of dominoes.