Thus far in this series on Effects, we've discussed building and using Effects that have a single "texture" or "sampler" as input to them.  In the Beta of .NET 3.5 SP1, that's all that was available.  With the RTM release, we've added the ability to provide multiple samplers as input to the pixel shaders that drive Effects, thus substantially increasing the flexibility of what can be done with Effects.

In this post, I'll show a very simple example of multi-input effects.  The result isn't anything particularly useful from a UI construction perspective, but it shows the general technique that can be used in more UI-relevant ways.  In fact, in the next post I do, I'll show something that's quite a bit more interesting from a UI perspective.

I'll demonstrate a simple shader that just combines, via pixel addition, two images.  This lets me take these two images: 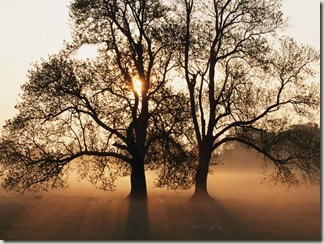 and create a little app that can produce these sorts of combinations of the two: 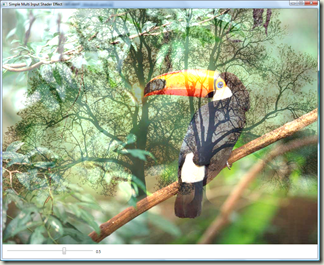 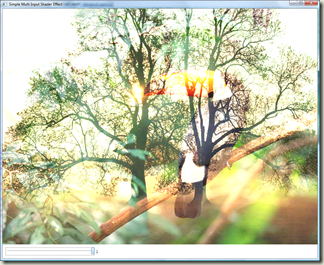 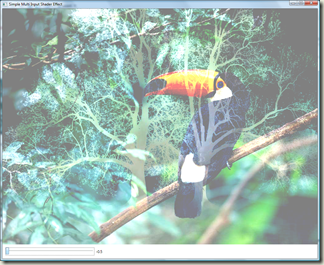 Let's first look at the XAML needed to build this.  This example, in fact, has no code at all... it's all XAML.  (At least the program that consumes the Effect... the Effect definition itself requires code.)

The large text is the stuff that's more relevant here. First note that we reference our tree.jpg image in an ImageBrush that's defined as a resource. That's because all sampler inputs come in through WPF as Brushes. In this case, it's an ImageBrush, but it could just as easily have been a VisualBrush, and thus anything that can be constructed in a WPF tree.

Next, the <Image> displays the Toucan image, and we apply our custom "SimpleMultiInputEffect" to the <Image>.  Here, we set a property, Input2, as a reference to our ImageBrush holding the tree.  We also set a double-valued property MixInAmount, which is bound to the slider value.  The Effect itself lets MixInAmount control the amount of blending that Input2 will do against the primary input.

Moving to the Effect definition itself.  In the C# for the Effect, the only thing notable is that we define another Brush-valued DependencyProperty:

The "1" provided as the last argument to RegisterPixelShaderSamplerProperty() indicates that this Brush's realization will be available in sampler register "1" in the pixel shader.

The HLSL gets a little more interesting:

This is also very simple.  All that's happening here is that color1 and color2 are being sampled from the two input samplers (the Toucan and the Tree images, in our application), and combined according to the value of mixInAmount.  When that value is 0, we end up with pure Toucan .  When it's positive, we're adding Tree in.  When negative, we're subtracting Tree out.  All on a per-pixel basis.

There are a few more details worth expanding on here:

That's it for now.  I've attached the solution that demonstrates this.  To build it, it requires the Shader Build Task that I had previously written about.  Next time I'll show a use of multiple effects that has a more practical use for UIs than the simple blending demonstrated above.