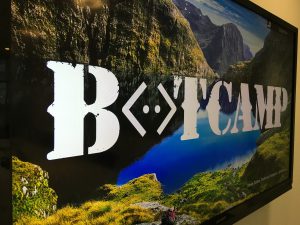 On 30th January 2017 at Microsoft HQ in Reading, in collaboration with Capita, Microsoft ran a “Botcamp” – an intense activity for a selection of 15 developers from across different Capita Software Services businesses.  The goal was to educate the delegates on the art of the possible with chatbots, by taking them out from their day jobs to give them opportunity to focus in this area and to see how their different business areas could benefit from them.

The day started with an introduction to the Microsoft Bot Framework, with an overview of the platform and code demonstrations.  The delegates were given familiarisation with a selection of Microsoft Cognitive services and how these could be integrated into a sample bot.  This gave the developers insight into how they could add artificial intelligence capabilities to their own bots.  We then split them into teams of 3 and got them to vote on 3 possible chatbot business scenarios:

UC3 was selected and the target user scenarios were:

The teams then worked together to see what they could build during the remainder of the day.  Each needed to present back to the rest of the group on their learnings and give a demonstration of their bots. 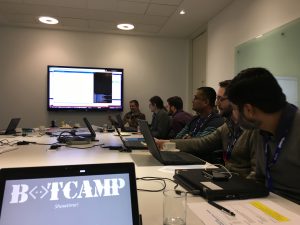 The team had a strong vision, they wanted to create a chatbot targeting “slow-burn emergencies”, such as an individual’s health deteriorating over time, or a flood progressively worsening.  The team wanted to create a picture bot that gathered information from users uploading photos.  The Vision API would then be used to give context to the images.
The bot would ask where the user was, using the Bing Location control and would build up a geoview on a particular incident via crowd sourcing to help prioritise emergency services dispatches.
The team demonstrated the use of LUIS for NLP and the Bing Location control to highlight user location.

The team handled non-emergency scenarios using both LUIS for NLP and FormFlow for data capture about a specific crime by asking questions such as: “Are you in immediate danger”, “Describe what’s happening”.  In a turn-by-turn based chatbot, it finally responded with the call to action – such as “police have been dispatched”.  After the crime was reported, a Crime Reference Number (CRN) was given to the user.  State management was implemented, so that after a crime had been reported updates could be retrieved using the CRN.

A bot for crime reporting for less serious crimes from shoplifting to anti-social behaviour.  Asking the user their whereabouts so they could pinpoint the exact crime location.
The team used LUIS for NLP and then asked the user follow-up questions to ascertain the crime details.  They leveraged LUIS entities to skip questions if information had been given in the initial chat dialog and made use of input buttons for most regularly reported crimes.

This team were keen to start coding from the outset.  Their bot allowed the user to report an accident, input user location and displayed on a map using the Bing Location control.  They also leveraged the Vision API to upload images and used the returned image metadata for validation.  An example was reporting a badly parked vehicle where the user could upload a photo they had taken.  The Vision API was used to validate that the image was of a car and would then try to perform OCR on the number plate.

The team used LUIS for NLP and allowed the user to either report a crime or receive updates on an existing one.  They used FormFlow to retrieve and validate the user input details.  They also leveraged Bing Spell Check to correct any spelling mistakes from the user.

Conclusion Within a very small timeframe all the teams built a chatbot from the ground up.  Most of the delegates had no prior experience of the Microsoft Bot Framework or had not used Microsoft Cognitive Services.  But by the end of the day, every team was successful in building a smart bot, leveraging LUIS, Bing Spell Check or the Computer Vision API within their chatbot. 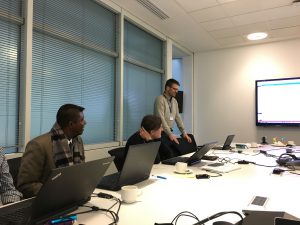 “I believe that Chatbots represent a new and really exciting channel into online services.  We know that users spend most of their time in messaging apps on their smartphones and certainly, millennials baulk at the idea of swapping into web apps to do interactions (having 3 teenage kids, I’m acutely aware of that!).  So, providing a human-like conversational channel, neatly integrated into your favourite messaging app is definitely a huge potential growth area.  The plethora of cognitive services now available (covering speech recognition, image/video recognition and natural language processing), means that we can give the Chatbots apparent intelligence and this could be transformational in a number of contact centre/self-service scenarios.”