A Note on Knives

Earlier this week someone asked me about which knife to buy. I launched into an exegesis that would have amazed, then bored, even Alton Brown. He said I should write it down, so I am.

At a book reading, I once asked Anthony Bourdain what one kitchen gadget he couldn't live without. When I said, "gadget" I was expecting an answer like a mango pitter or an immersion blender. After a moment's hesitation during which he was probably considering whether to call me an idiot right then and there or to hold off for later, he said, "A good chef's knife." 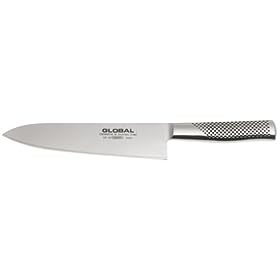 When I'm cooking I use two knives 99% of the time: a paring knife and a chef's knife. The chef's knife accounts for 98% of that 99%. A chef's knife is the workhorse of the kitchen. You will use it for everything from cutting up carrots to opening cans. This really is the one that slices, dices, and purees. Wielded properly, a chef's knife can peel an apple and have the peel come off in one piece. Chef's knives come in lengths from 6" to 12" with most falling in the 8" to 10" range: any shorter than 8" and it's not useful for things like cutting along the length of a carrot; any longer than 10" and it gets hard for an average-strength (and coordination) person to use. Mine are all 8".

The other investment is a good sharpening steel. Steeling your knives extends their life and makes them easier to work with. For years, I ignored this advice and would just haul out the sharpener and sharpen the knives every couple of months. In the interim, my knives got duller and duller. I was an idiot. You need a good quality (which probably means a diamond-encrusted) steel. Sharp knives are not just easier to use, they're safer because you use less pressure and if you should cut yourself, the cuts heal more quickly because they are thinner and more even. (This is the voice of experience talking.)

Once you start to look at knife brands you'll find a bewildering array from a host of vendors. I hear two brands talked about most often by chefs: Global and Shun. From everything I've heard, they are just incredible knives and they get nothing but rave reviews. Which is great if you're willing to spend $100+ on a chef's knife. I have a set of Henkels that work just fine and I would recommend. I have also come to love another knife: my Victorinox 8" chef's knife. At $20 it's a great deal and it holds its own with much more expensive cutlery. If you're the kind of person who wants the brand, get the Global or Shun. If you just want to cut stuff with a good knife, get the Victorinox. And don't get me wrong: part of impressing your guests with your cooking skills isn't just cooking well, but having the right gear.