In this article, we’ll describe the process to install the VSS Hardware Provider (and, incidentally, the VDS Hardware Provider) for the Microsoft iSCSI Software Target, which is part of Windows Unified Data Storage Server 2003 (WUDSS 2003).

We’ll use two servers in this scenario. SERVER0 is the iSCSI Software Target, running WUDSS 2003. SERVER1 is the application server (a SQL Server, for instance) running Windows Server 2008 and the built-in iSCSI initiator. We’ll install the VSS hardware provider in SERVER1.

Below you see the output of the VSSADMIN command-line tool running on SERVER1 before the installation:

You can confirm that there is no VSS provider installed except the in-box system provider.

Since we’re running Windows Server 2008 on SERVER1, we can also use the DISKSHADOW command line tool to check which VSS providers are loaded, which you can see below:

Keep in mind that this software was updated this year to include support for Windows Server 2008, so you need to get an updated version from your WUDSS vendor.

Please note that Microsoft provides this client software to the OEMs that sell WUDSS, not directly to end users.

This is generally referred to by the Partner Knowledge Base article number that documents it.

If your OEM support person has any trouble finding it, ask them to look up Partner KB 949499. This is not a public KB, but all WUDSS OEM partners have access to it.

There are two versions of the Client, one for 32 bits and one for 64 bits. Choose the right file and run it.

The setup is delivered as an MSI file that leverages the Microsoft Installer technology. Here’s the welcome screen: 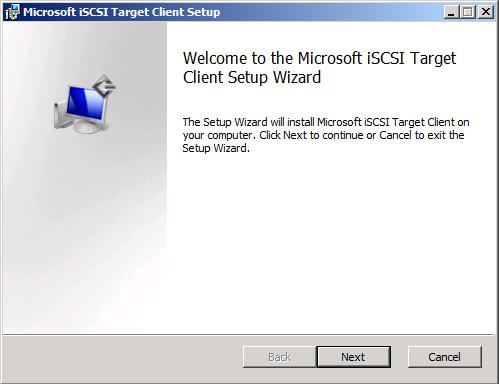 After you click next and accept the license agreement, you are taken to the screen that offers a choice of “Typical” or “Custom” install. See that below: 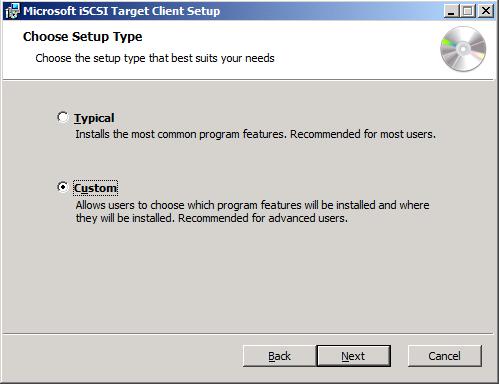 The “Typical” option will install both hardware providers (VDS and VSS). The “Custom” option will ask if you want to install VDS, VSS or both. See the screen below: 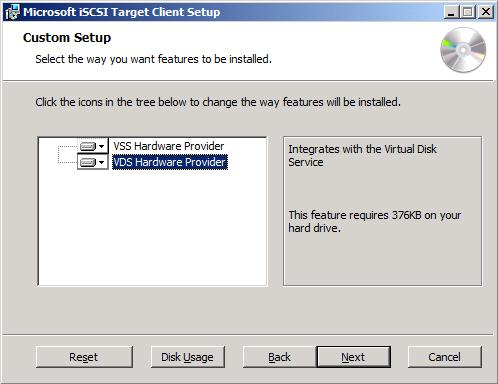 You then need to specify the user credentials to be used by the providers. Those will be used to authenticate with the iSCSI Software Target.

The account must have administrator privileges in both servers involved. Here’s that screen: 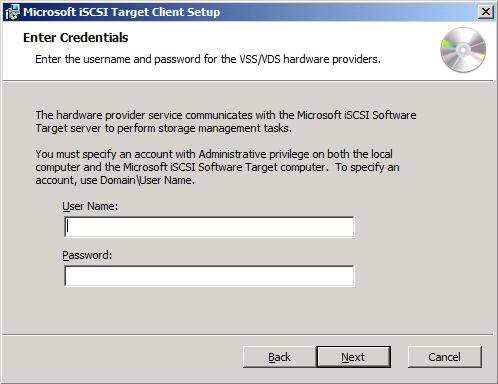 In the last screen you confirm the operation and start the actual installation. It’s a very quick install and it does not require a reboot.

After that, you should be all set. You can verify this by running VSSADMIN again.

Check the output below, which shows the “list providers” parameter being used to verify everything is in place:

If you’re running Windows Server 2008, you can also use DISKSHADOW to verify that the VSS hardware provider is loaded.

Check the output below, which shows the “list providers” command being used to verify everything is in place:

Since DISKSHADOW is a VSS Requester, you can now use it on SERVER1 to create and expose a snapshot. For instance, check this output:

That shadow copy can also be seen from the Microsoft iSCSI Software Target MMC running at SERVER0:

I hope these steps helped you install your VSS hardware provider for the Microsoft iSCSI Software Target.

At this point, you can start creating and exposing snapshots of your iSCSI VHDs on SERVER0 from SERVER1 using any other VSS Requester (like your favorite backup application).

For more information about WUDSS 2003, check https://www.microsoft.com/windowsserversystem/storage/wudss.mspx. Please note that WUDSS is only sold via OEMs like HP and Dell. It is not available via any other Microsoft sales channels like software retailers or volume licensing. WUDSS is also not available from MSDN or TechNet subscriber downloads.