In TFS 2010, we added Gated builds. A gated build is like a pessimistic continuous integration (CI). CI builds are started after every check-in to make sure the developer didn’t break anything. Gated builds require the developer to check-in through the build process itself. The check-in is blocked until the build succeeds. To guarantee that the build is never broken, gated definitions only allow one check-in at a time. But this leads to a problem for large builds. If your build takes 30 minutes to build, you can only get 48 check-ins thru the system in a day.

The solution to this problem is not to allow parallel builds and check-ins, because that may lead to broken builds. Rather the solution is to allow the build definition to build more than one queued build at a time (or to Batch the builds). By batching the queued builds, you can increase the throughput almost as much as you want (until you have a build failure – more on that below).

Here’s how this works in TFS11…

On the build definition Trigger tab, you can specify to “Merge and build” gated builds and provide the maximum size for a batch. 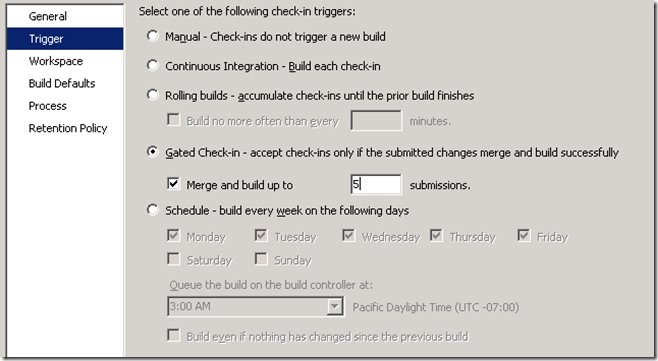 When a build starts the TFS server will look at this setting and start the build with the next 5 queued builds from the definition’s queue. The build process has been updated to handle multiple queued builds. This is what it does with the queued builds (also called build requests)…

In the instructions above, you may notice an algorithm to handle build failures. This is how the default algorithm works:

Notice that when a batched build fails, you end up building more times than you would have if you didn’t batch at all. This means that you should keep the batch size to a small number. For our builds internally, 5 works well. If you end up with a bad check-in in every batch, you should do one of two things: 1) stop using batched builds or 2) stop letting that dev check-in.

Technically speaking, this algorithm could be changed, but it would be very difficult. We chose a pattern that we felt was simple, effective, and transparent. 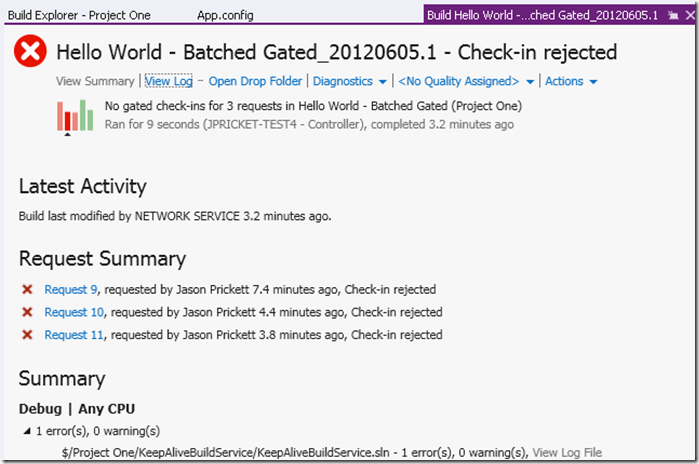 And there’s a new view called the Build Request view. If you click on one of the Request links above you will get to this new view that looks a lot like the Build Details View. 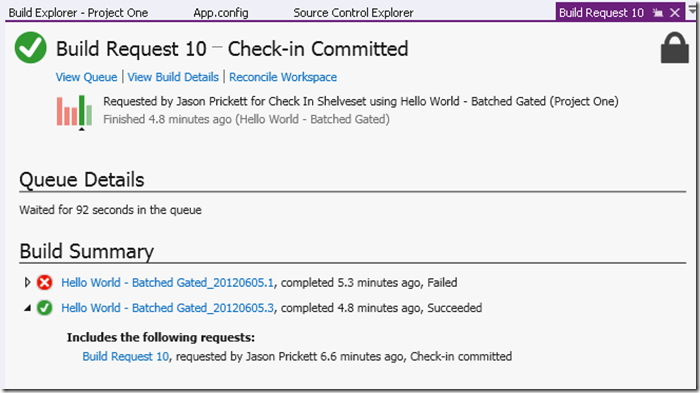 Hopefully, this information will help you understand this new feature in TFS11.