Waiting for my kindle...

I ordered it a few weeks ago, but they're behind on production, so it took until yesterday to ship (and supposedly is arriving today - hurrah for online up-to-the-minute package tracking!).

At first, I was cynical and gave a lot of weight to the negative reviews of the Kindle... DRM, usability problems with handling the device and accidentally switching pages, lack of selection, etc. But then as I thought more about my scenarios as a user, I realized that although I wish there wasn't DRM, it probably not affect my ability to use the device to meet my needs and desires as a user - the only person i've loaned a good book to recently is my husband, and fortunately he happens to live in the same house :-). Even with my paper books I often accidentally go to the wrong page, and it's never bothered me. I looked through the selection and found that many of the books on my wishlist (as well as many of my old standy favorites, like Terry Pratchett) were available - and wireless reading of wikipedia? Bonus. I also trust Amazon to continue to increase the Kindle-available books, and they are doing what they do best there, taking advantage of their vast database and integrating a friendly little "nag":

All they need to do after that is provide a one-click option "Would you like this book on the kindle? Vote for it here, and we'll pass along your feedback to the publisher"... and I wouldn't be surprised if they're already hard at work on that.

But really, what won me over and finally helped me make the decision to buy was observing how much Amazon seems to have thought about the full end-to-end user experience. The pre-paid wireless, built into the cost of the device. There's the ease of purchasing, and even try-before-you-buy: 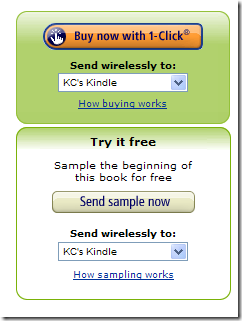 So yeah, Amazon annoyed a bunch of customers by not delivering their expected pet feature on the Kindle. The important thing is - are the ones they did ship complete, end-to-end? Did they think through not just the usability of the device and reading on it, but how items get to the device, how you buy them, how you keep track of what you bought? And most importantly, do you trust them to continue to evolve the Kindle in the right direction?

It's a great lesson for us and anyone else developing software or hardware... it's far better to ship a single full scenario than two half-way ones. Cutting is a necessary evil in product development, if we never cut then we'd never ship. "Shaving" is a way of trimming a feature bit by bit, supposedly to cut out the extra fat to get the feature lean and shippable. But sometimes you risk shaving off the tastiest part of the meat, or you shave off a flavor that was nothing by itself, but played a pivotal role in the complex flavor of the entire dish, such that you would have been better off to cut out the entire dish vs serve it to your customers without that key piece.

This may seem obvious, but building user trust is so incredibly important to the success of a product or service. It's difficult to do, but fortunately I don't think there's only one way to build it. What can Microsoft, and Exchange/Outlook in particular, do better in order to increase user trust? According to this report, Apple is the most trusted brand with young consumers. Should we follow Apple's disclosure model of "Don't say anything until it's in the stores", so that we never disappoint anyone when we end up cutting or shaving something after we mentioned it? What are we doing today that is eroding user trust? What do we need to do differently to build trust with end users, as opposed to IT pros? A lot of interesting questions in this area, more thoughts on them later when I'm not at home sick slavishly being loyal to Amazon...