“I love the word Penultimate,” and I love our family’s made up Internet holiday “The Penultimate Day of School.”  As we are now nearing the end of the antepenultimate month of school I felt it was time to make another post promoting our new holiday and highlighting my favorite family of words that now includes, ultimate, penultimate, and antepenultimate.  I could of course add the word preantepenultimate to the list but I think  I’ll save that one for a later blog post.

I thought of using an example drawn from the Miss Teen USA 2007 competition but I couldn’t do that without bringing up the case of Miss Catlin Upton and her disastrous response to the question in the final round.

Miss Upton has suffered through more than 50 million views on 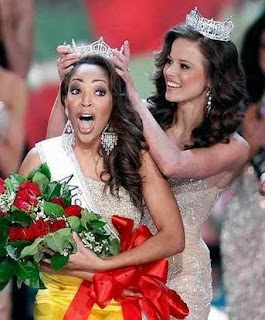 YouTube but has also leveraged that faux pas into a dozen or more TV appearances.  It would certainly be a humorous example, but there is a problem.  Miss Upton ended up being the preantepenultimate finalist, and I promised I wouldn’t go into that word in this posting.

Instead let’s go with the Miss America 2010 finalists.  Miss America still maintains a core focus on scholarship assistance for young women.  I expect all of their finalists listened to and adequately responded to their questions.

See, the second runner up is actually the antepenultimate winner.  It couldn’t get any easier than that, could it?

What else do we have that falls into the realm of antepenultimate things?  Let’s start by looking at other competitive endeavors.  In this case the focus remains on winning and so antepenultimate winners would be in third best.  We’ll get to third worst losers in just a bit.

And those that didn’t really quite lose are?

Personally I feel focusing just on third place winners goes against the real intent behind the word antepenultimate.  I mean the definition is third from last in a long series so instead let’s now turn our attention to those finishing third to last.

Penultimate Day of School is about fun with words

This blog pose however is not about racing, politics, sports or even Dancing with Stars.  This blog post is meant as a celebration of really gargantuan fandangled words and getting very young children to use them.

Why the focus on the penultimate day of school you may ask?  Quite simply to give my kids and their friends something to do on the second longest day of any school year while secretly helping prepare them for future success.

Let’s face it, the last day of any school year is often filled with hugs, exchanges of email addresses and phone numbers, and for the younger kids they often have a class party.  The next to last day, the penultimate day, teachers often force themselves to keep teaching.  Outside the weather is warm, summer is breaking out, many public pools are opening up.  The children can’t be expected to focus and so I submit that to a child the penultimate day of school must seem like the longest day of the year.

So, why not create a fun new made up holiday that helps children prepare for their future college entrance exams and life in the business world.  Just search for books on improving one’s vocabulary and dozens of resources pop up.  Vocabulary is big business.

It really works.  Just a few weeks back the weather was getting warmer and my son decided we should play a little wiffleball baseball in front of the garage.  We used a pitching machine and you could keep hitting as long as you didn’t get three outs.  Of course this meant the roof had to be in play and we had to use a lot of ghost runners.  The problem for me was that I could never tag the ghost runners out, they always seemed to be faster than me.

After my son and his ghost runners outscored me about 227 to 10, long after the sun had dipped below the horizon and the sky had faded from bright orange to dark purple, and long after the outside photoelectric sensor turned the lights on, I decided it was time to go inside.  If you have little ones, you know that when Dad says it’s time to do something else, they know immediately there is still time to do just a bit more of whatever is going on at the moment.

“No Dad, you haven’t been up in a long time,” he replied.

“Okay, how about this,” I said back to him, “what if you take one more at bat and then I’ll take the last four balls from the pitching machine?”

“Yeah! That means I’ll have the penultimate at bat and you’ll be ultimate,” he said casually.  Well you can imagine that I was quite floored that my second grader would use a word like that in casual conversation.

That’s it.  Nothing complex, just a little fun for the next to last day of school.

In the spirit of fun I’ll end with this quote I found that uses the word penultimate along with one of my perennially favorite comics Peanuts, “Although Brown intellectually knew that Lucy had demonstrated a repeated propensity to whisk away the football at the penultimate moment, leaving him tumbled head over heels, he was ever hopeful that she would hold true the very next time.”