Troubleshooting Scenario 6 – Role Recycling After Running For Some Time

In Troubleshooting Scenario 2 we looked at a scenario where the role would recycle after running fine for some time due to a bug in a startup task triggered by a role recycle such as an OS update.  This blog post will show another example of this same type of behavior, but with a different, and more difficult to find, root cause.  This is a continuation of the troubleshooting series.

Similar to what we looked at in Scenario 2, your role has been running fine for some time but seemingly without cause it enters a recycling state and the service health dashboard shows that everything is operating normally.

Get the Big Picture

As we have in the other troubleshooting scenarios we will start by looking at Task Manager for a minute to see what processes are running, or starting and stopping.  When we initially look we only see WindowsAzureGuestAgent.exe: 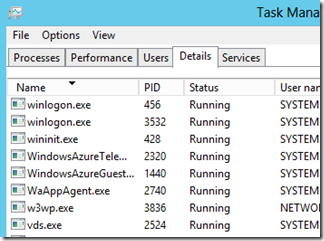 After watching for a minute or two we see WindowsAzureGuestAgent.exe consuming CPU cycles, so we know it is doing some work, but we don’t see any other processes.  We know that the guest agent is supposed to start WaHostBootstrapper.exe, but we never see this process in task manager.

From the ‘Get the Big Picture’ section in Troubleshooting Scenario 1 we know that if we don’t see WaHostBootstrapper running then the problem is most likely within the Azure guest agent (WindowsAzureGuestAgent.exe) itself.

From the diagnostic data blog post we know that there are 2 types of guest agent logs – App Agent Runtime Logs in AppAgentRuntime.log, and App Agent Heartbeat Logs in WaAppAgent.log.  This section will briefly describe the content in the logs and how to look at them.

The app agent runtime logs are normally filled with lots of error messages and hresults which look like problems, but are expected during the normal execution of the guest agent.  This makes analyzing these logs very difficult and more art than science.  Here are some general guidelines for how to look at these files and what messages to look for.

The heartbeat logs are very verbose and are typically best used to determine the status of the VM at a given point in time.  Here are some guidelines on how to look at these files:

From the guidelines above we know to start with the AppAgentRuntime logs because those track the major events that happen with the guest agent, and we know to start off by scrolling to the bottom of the file and working our way up.  We also know to start looking for a _Context_Ends entry with a non-success hresult.

The first entry we find is:

The interesting aspect of this line is that it is occurring on a StopRole context, but we know that we are trying to start the role.  Whenever a StartRole fails the guest agent will then do a StopRole in order to tear everything down to prepare for another StartRole.  So most likely this HRESULT is just a symptom of the real root cause and can be ignored.  We also know that the hresult 0x80070490 is one of the ones that can usually be ignored.

Continuing to search up we find another Context_Ends with a non-success return value:

This one looks more promising since we know the failure is occurring while the guest agent is trying to start the role.  Continuing to search up in the file on that hresult (80070020) we find several more entries, and finally we find the origination point:

So we know that the RuntimepDestroyResource function call returned an 0x80070020 hresult which bubbled up to the StartRole context and caused the role to fail to start.  Next we want to continue to look up in the log file to see what other details are being logged about the execution of RuntimepDestroyResource and any logged failures.  The very next line up in the log file is:

Nothing else looks interesting in the few lines preceding this delete file entry so this must be the root cause of the problem.  The section of the log file where we see this error is:

As we know from the guidelines above, the series of lines starting with “<-“ can be seen as a callstack.  This tells us that the failure to delete a file is coming from the RuntimeSetupRoleResources function.

We know that the failure is due to the fact that the guest agent can’t delete a specific file, and that the file is trying to be deleted when executing RuntimeSetupRoleResources.  At this point some experience with the Azure service model and VM setup is helpful, along with some knowledge of the DiagnosticStore folder (the folder where the file is being deleted from).  The RuntimeSetupRoleResources function is responsible for setting up the <LocalResources> as defined in the service’s ServiceDefinition.csdef.

This hosted service is changing the size of the DiagnosticStore LocalStorage resource in order to accommodate a larger diagnostic store for Windows Azure Diagnostics, per the information at https://msdn.microsoft.com/en-us/library/windowsazure/microsoft.windowsazure.diagnostics.diagnosticmonitorconfiguration.overallquotainmb.aspx.  The entry in the csdef looks like this:

The problem is that this definition is incorrect.  The cleanOnRoleRecycle setting is set to true, which instructs the guest agent to delete the folder and recreate it during every role start.  But if a file in that folder is locked (in this case it is w3wp.exe locking an IIS log file) then the delete will fail, causing the guest agent to fail to start the role.  The solution is to change cleanOnRoleRecycle=”false” and then redeploy.