Although Windows Server 2012 R2 has already released for more than 2 years, from time to time people still has questions regarding the Storage Space Tiering in it. For example:

To answer the above questions, I wrote this blog and explain how Storage Space Tiering works. I will also prove it with real test case.

This typically delivers very efficient storage management with little or no intervention on your part. That's why Storage Space doesn't enable use to modify it thru UI. However, if you need to adjust the number to get the performance you want for a specific workload, you may specify the write back cache size when you create virtual disk thru PowerShell cmdlets. For example:

Here are the data flows start from the storage pool and virtual disk got provisioned.

(Some of the content below come from the above papers.)

If you're using tiered storage spaces in Windows Server 2012 R2, Windows is automatically optimizing your storage performance by transparently moving the data that's accessed most frequently to your faster solid-state drives (the SSD tier) and switching out less active data to your less expensive hard disk drives (the HDD tier).

Storage tiers optimization is a two-part process, as shown below:

Optimization moves data, not files—The data is mapped and moved at a sub-file level. So if only 30 percent of the data on a virtual hard disk is "hot," only that 30 percent moves to your solid-state drives.

1. Create a storage pool with the above 4 SSDs and 4 HDDs

2. Create a virtual disk with tiered storage. In this case, SSD Tier has 740GB capacity. 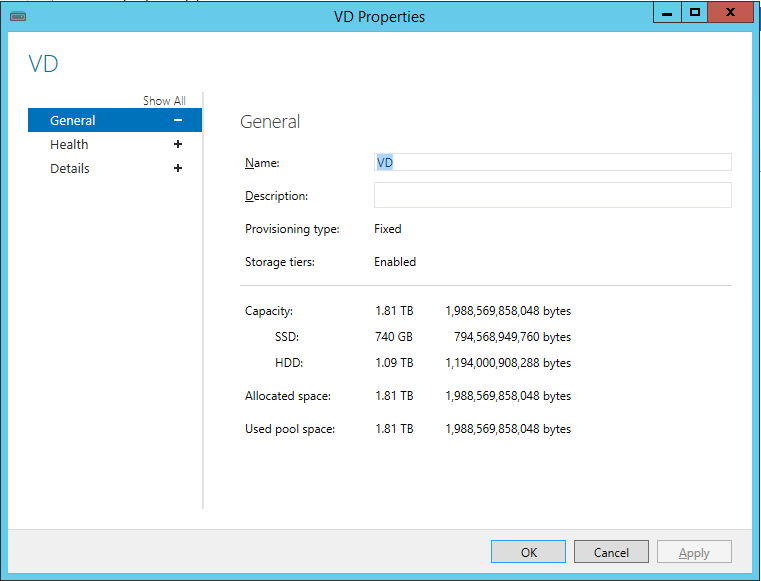 3. Use Diskspd.exe to stress test the above virtual disk.

From the performance log below we could see test result is pretty good, average IOPS is around 120,429. Basically that's expected performance from 4 Optimus SAS 200GB SSD drives. 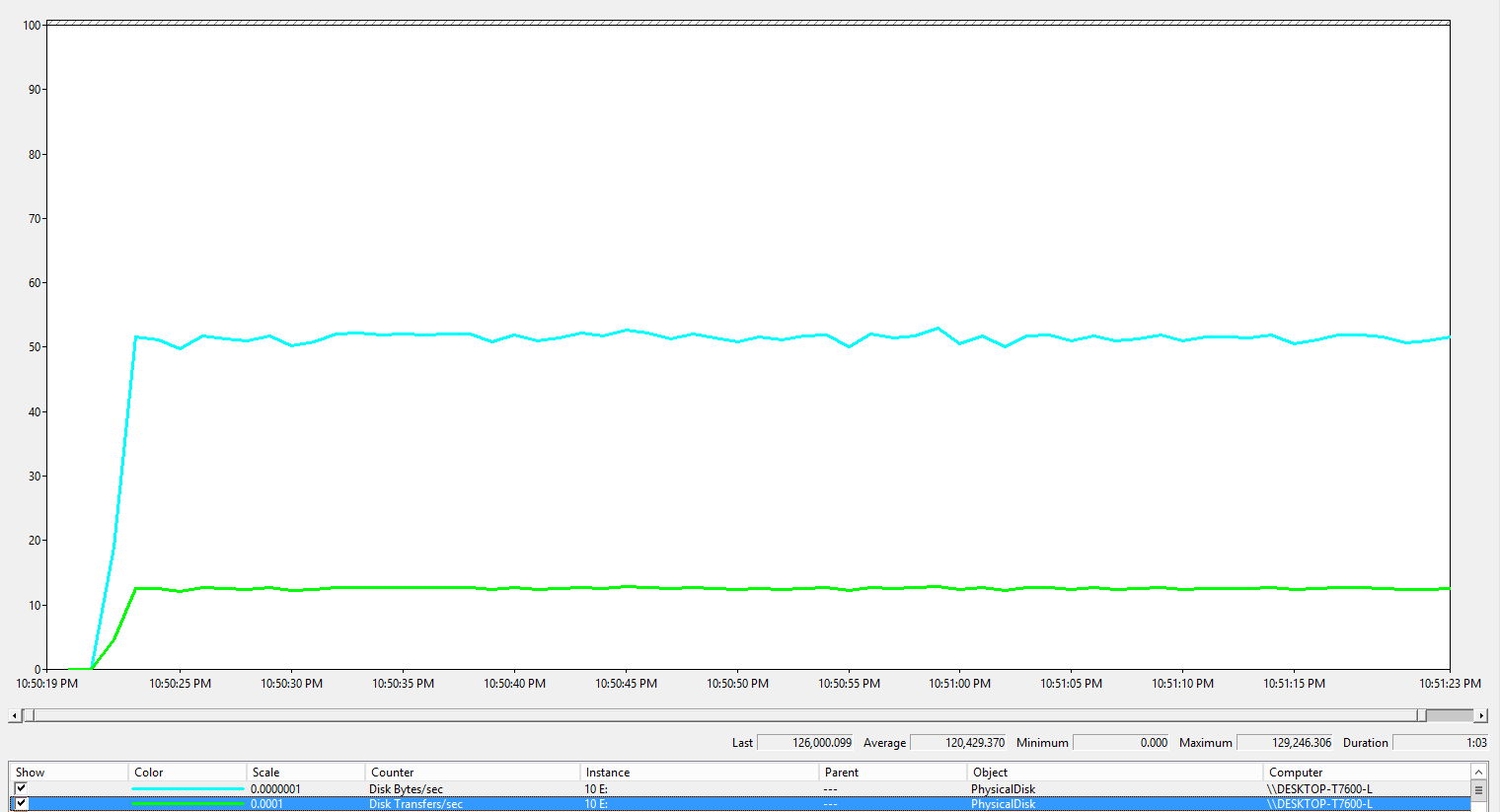 If we look at the performance of each tier, we could see all of the IOs are in SSD tier. 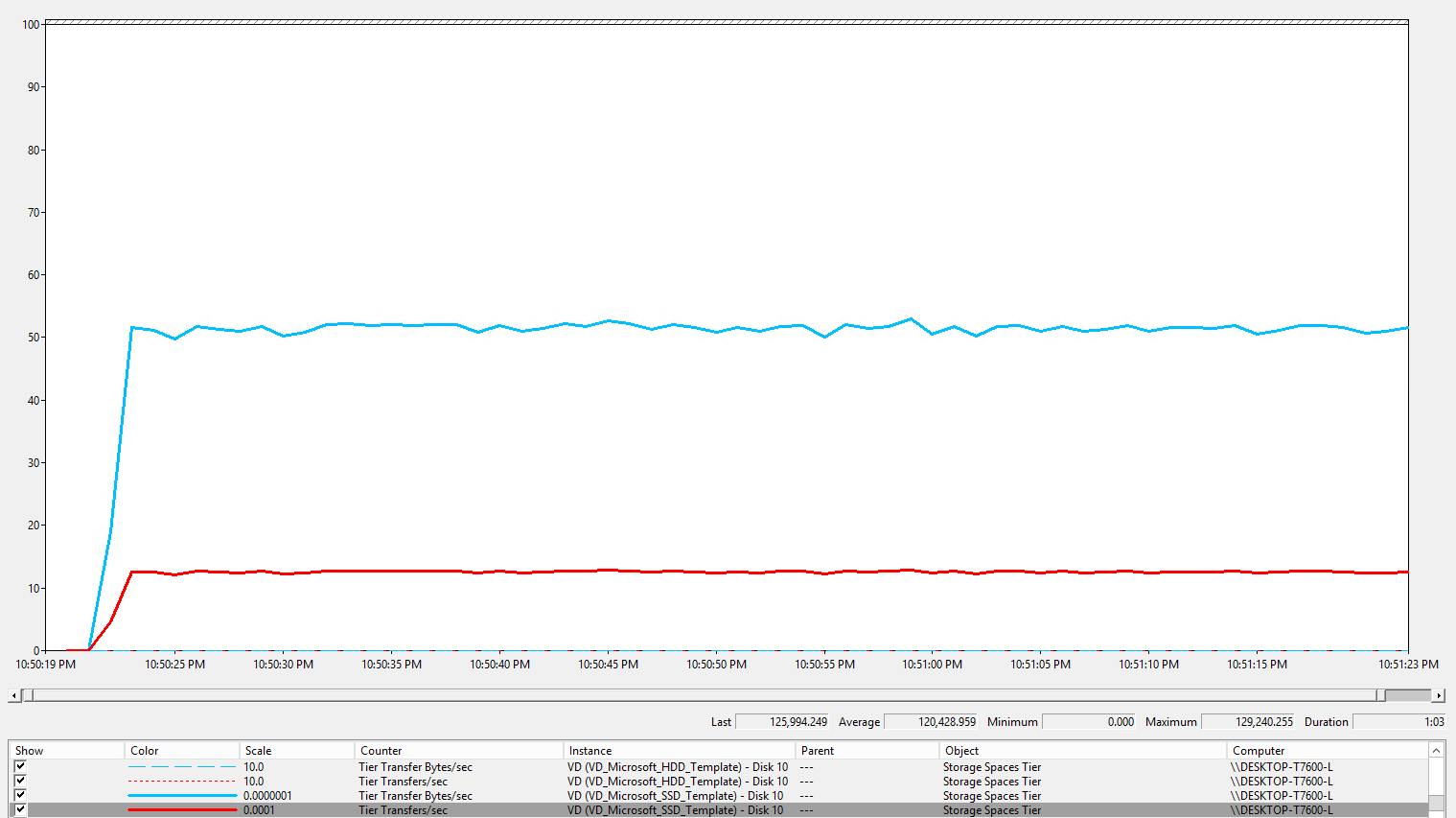 In addition, in the whole test, we didn't use any write back cache.

1. Create some large files on the above virtual disk. Total size is large than the capacity of SSD tier (740GB).

Now this time the performance is not good. Average IOPS is only around 1,628, which is close to what 4 10K rpm SAS HDD can provide. 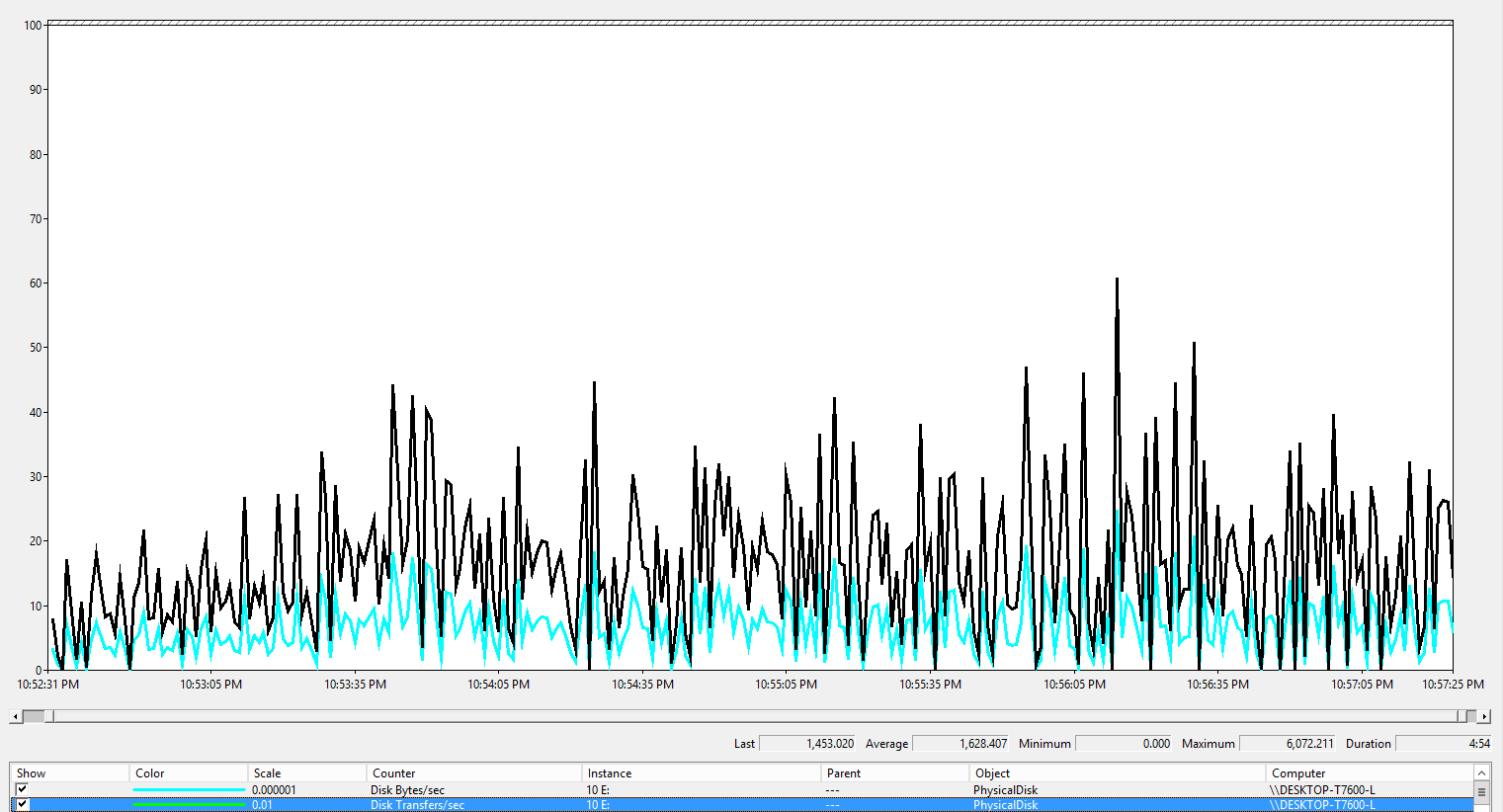 What happened? The picture below tell us almost all the IO are in HDD tier. 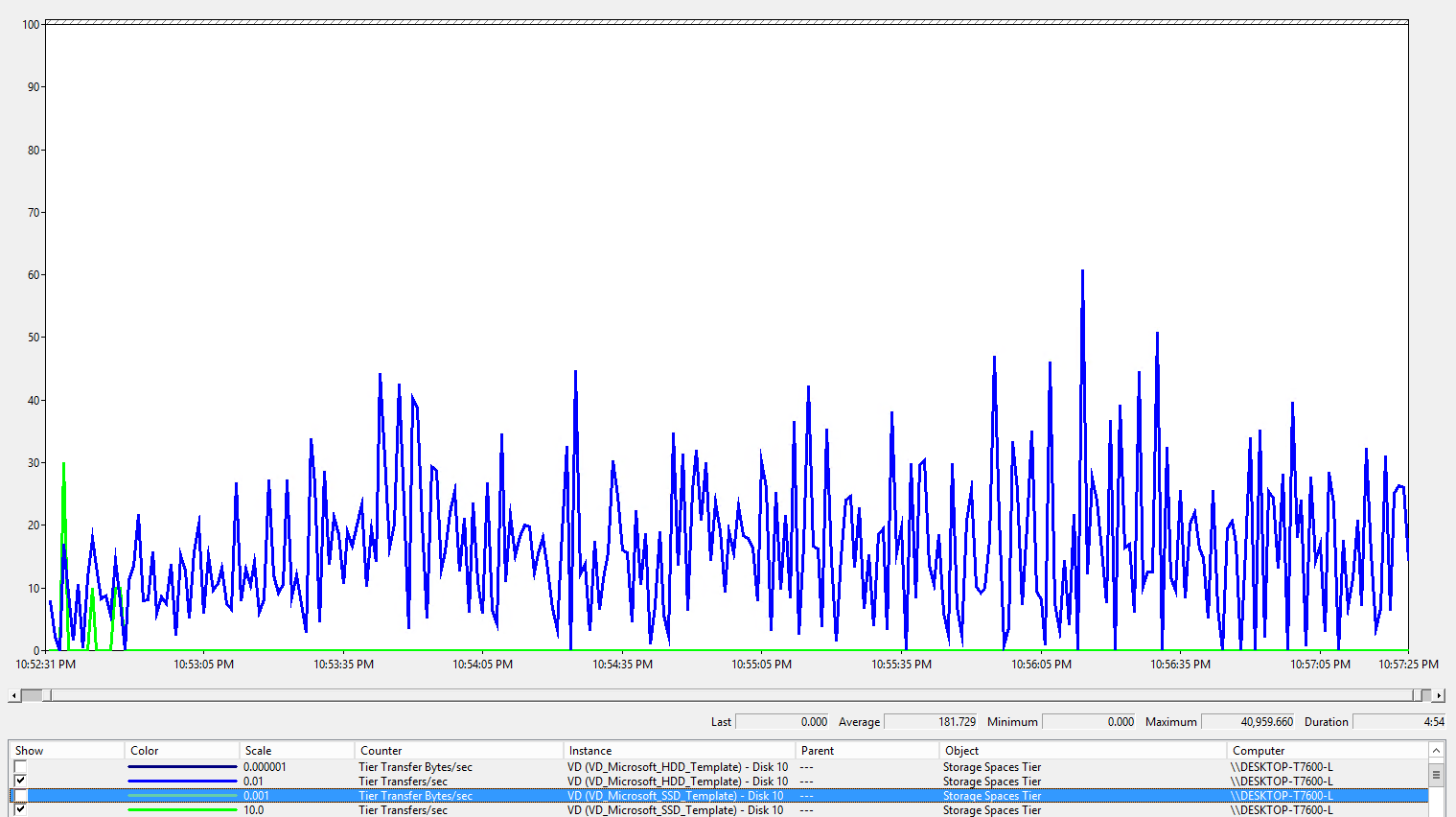 This time, write back cache had been used.

Pattern of available cache space told us that 1GB write back cache continues being fill in and flush out.

As mentioned in the paper Monitor Storage Tiers Performance in Windows Server 2012 R2 there is a scheduled task called "Storage Tiers Optimization", which will move the data that's accessed most frequently to your faster solid-state drives (the SSD tier) and switching out less active data to your less expensive hard disk drives (the HDD tier). 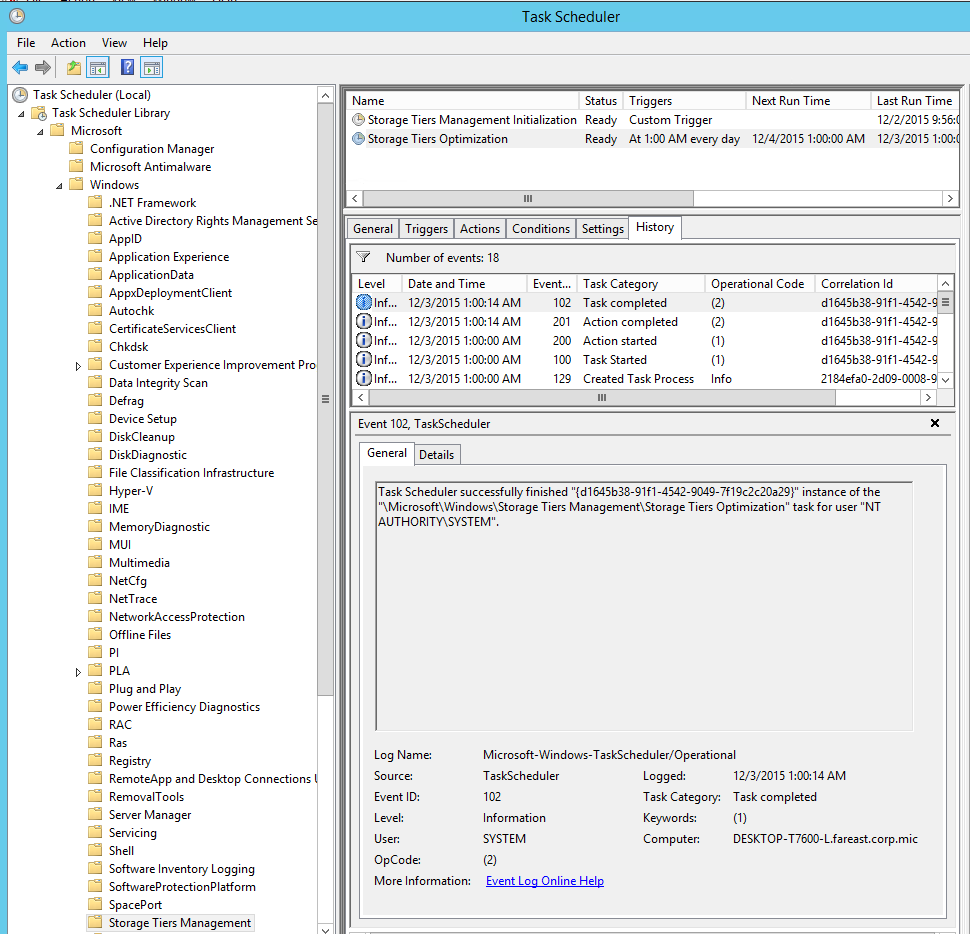 We could the performance had been recovered. The average IOPS is around 115,870. If we excluded the abnormal stage of the first 30 seconds, the average IOPS would be 120,000, which is close to the first test case. 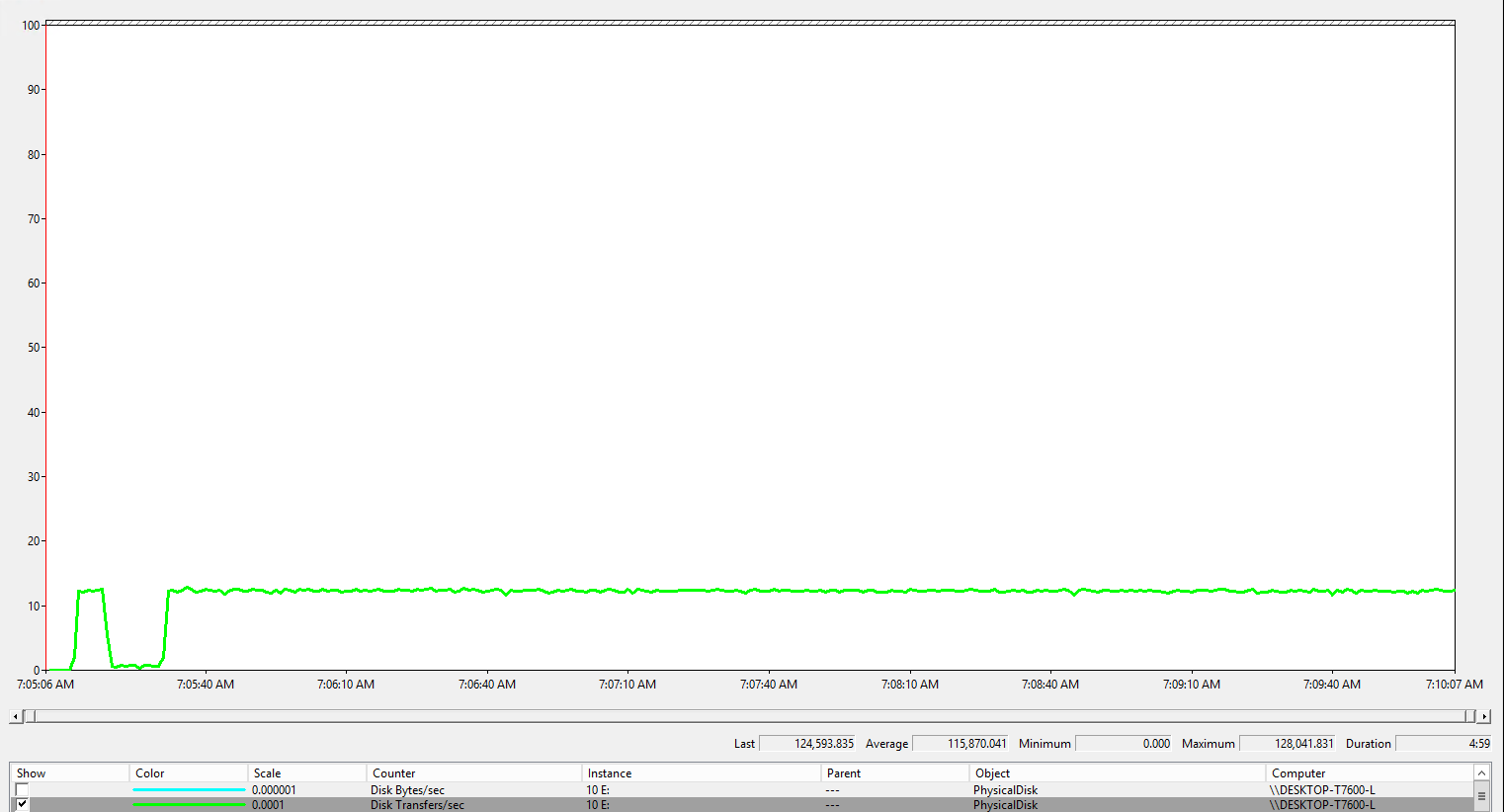 From the picture below, we could prove that all the IO are in SSD tier. 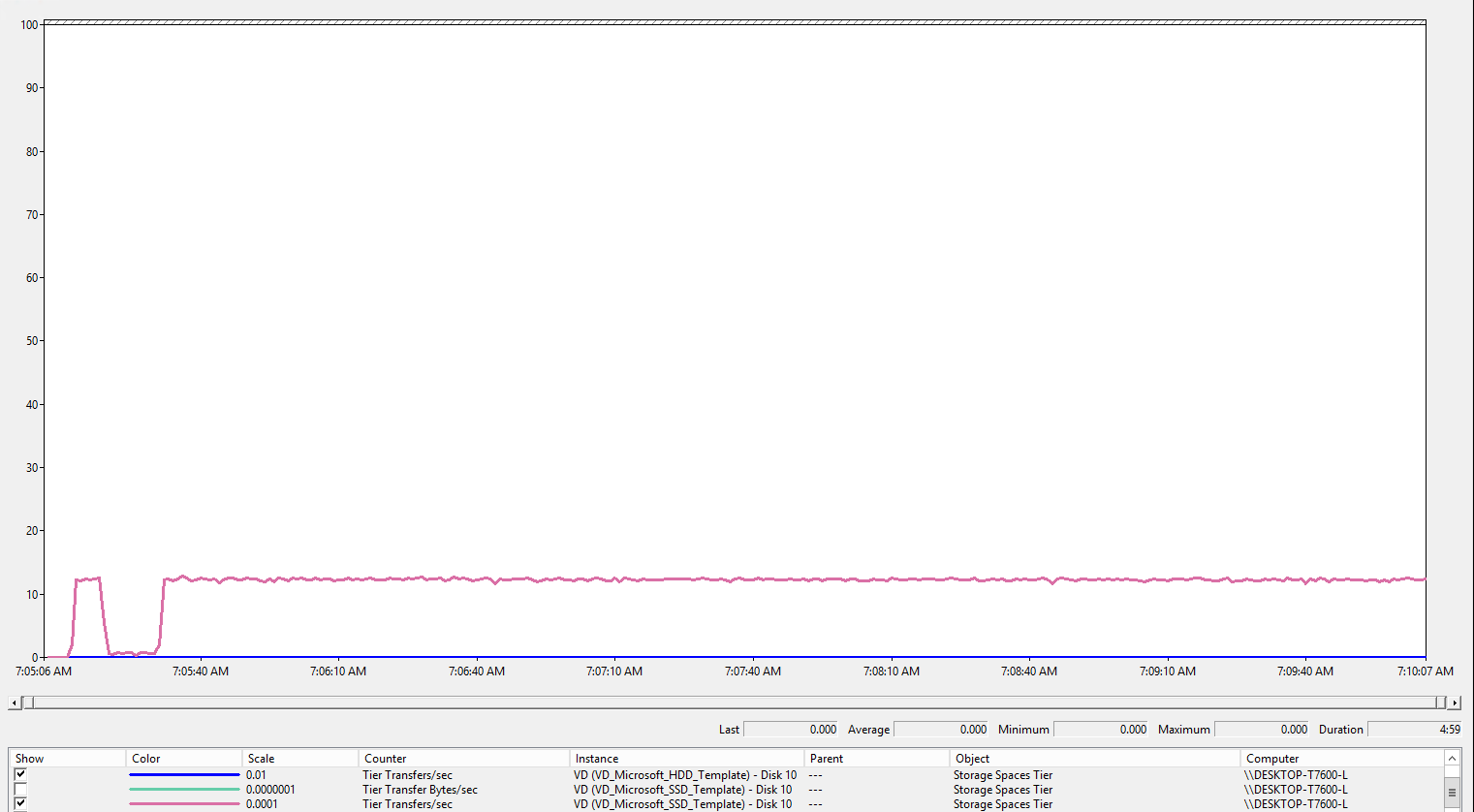 Same as the first test, in this case, we don't need write back cache. 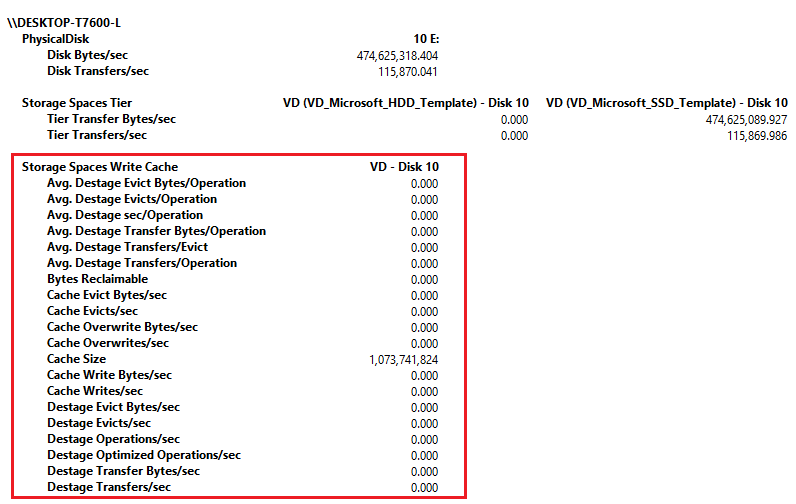 Now I believe we could answer the questions in the first section with confidence.