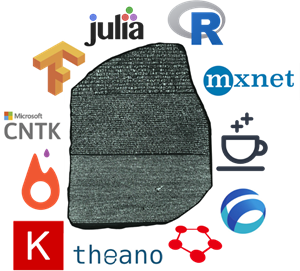 With this blog post, we are releasing a full version 1.0 of this repo, open-source on GitHub at: https://github.com/ilkarman/DeepLearningFrameworks.

We believe deep-learning frameworks are like languages: Sure, many people speak English, but each language serves its own purpose. We have created common code for several different network structures and executed it across many different frameworks. Our idea was to a create a Rosetta Stone of deep-learning frameworks – assuming you know one well, to help anyone leverage any framework. Situations may arise where a paper publishes code in another framework or the whole pipeline is in another language. Instead of writing a model from scratch in your favourite framework it may be easier to just use the "foreign" language.

We want to extend our gratitude to the CNTK, Pytorch, Chainer, Caffe2 and Knet teams, and everyone else from the open-source community who contributed to the repo over the past few months.

In summary, our goals with this release were to create:

A pre-trained ResNet50 model is loaded and chopped just after the avg_pooling at the end (7, 7), which outputs a 2048D dimensional vector. This can be plugged into a softmax layer or another classifier such as a boosted tree to perform transfer learning. Allowing for a warm start, this forward-only pass to the avg_pool layer is timed. Note: batch-size remains constant, however filling the RAM on a GPU would produce further performance boosts (greater for GPUs with more RAM).

The input for this model is the standard IMDB movie review dataset containing 25k training reviews and 25k test reviews, uniformly split across 2 classes (positive/negative). Processing follows Keras approach where start-character is set as 1, out-of-vocab (vocab size of 30k is used) represented as 2 and thus word-index starts from 3. Zero-padded / truncated to fixed axis of 150 words per review.

* = These have not yet been implemented as of publishing of this post. We always welcome contributions from the community to add to the results!

When we originally created the repo, there were many little tips and tricks we had to use to ensure we were using the same model between frameworks and it was done in an optimal way. It has been incredible to see how quickly the frameworks have all evolved in just the last few months – many of the original learnings from late 2017 of how to best optimize are obsolete today as the frameworks have been updated.

For example, Keras with a TF backend had channel-ordering hard-coded as channels-last (which is not optimal for cuDNN), so specifying channels-first meant it would reshape after every batch (to the hard-coded value) and slow down training immensely. Now Keras with a TF backend supports native channels-first ordering. Tensorflow could previously be sped up by specifying a flag to use the Winograd algorithm for convolutions, however this is no longer helpful. For fun, check out some of the initial learnings in an earlier version of the repo.

Of course, while it is tempting to compare different frameworks with these metrics such as speed and inference time, they aren't meant to suggest anything about the overall performance of the framework since they omit important comparisons such as: help and support, availability of pre-trained models, custom layers and architectures, data-loaders, debugging, different platforms supported, distributed training, and much more! They are simply meant to show how to create the same networks across different frameworks and the performance on these specific examples.

There are many popular deep learning frameworks that are leveraged in the community, and this is one effort to help AI developers and data scientists leverage different deep learning frameworks as applicable. A related effort is the Open Neural Network Exchange (ONNX) which is an open source interoperability standard for transferring deep learning models between frameworks. ONNX is useful when developing in one framework but wanting to convert to score the model in another for example. Similarly, MMdnn is a set of tools to help users directly convert between different frameworks as well as visualize the model architecture.

The "travellers companions" for deep learning frameworks such as ONNX and MMdnn are like an automatic machine translating machine. In contrast, the repo we are releasing as a full version 1.0 today is like a Rosetta Stone for deep learning frameworks, showing the model building process end to end in the different frameworks. All of these types of efforts combined result in a traveller ready to live in an environment with many languages.

Spin up an Azure Deep Learning Virtual Machine, replicate, and contribute back to the repo – happy coding!