Object detection powers some of the most widely adopted computer vision applications, from people counting in crowd control to pedestrian detection used by self-driving cars. Training an object detection model can take up to weeks on a single GPU, a prohibitively long time for experimenting with hyperparameters and model architectures.

This blog will show how you can train an object detection model by distributing deep learning training to multiple GPUs. These GPUs can be on a single machine or several machines. You will learn how to perform distributed deep learning on Azure, and how you can do this using Horovod running on Azure Batch AI.

Object detection combines the task of classification with localization, outputting both a category and a set of coordinates representing the bounding box for each object that it detects in the image, as illustrated in Figure 1 below.

Over the past few years, many exciting deep learning approaches for object detection have emerged. Models such as Faster R-CNN use a two-stage procedure to first propose regions containing some object followed by classification of the object in each region and adjusting its bounding box. Using a one-stage approach, models such as You Only Look Once (YOLO) and Single Shot MultiBox Detector (SSD), or RetinaNet, consider a fixed set of boxes for detection and skip the region proposal stage. These are a few examples of the array of model architectures available to you for doing object detection.

Instead of taking the raw image as input, these object detection models work off the feature map produced by a backbone network, which is often the convolutional layers of a classification network such as ResNet. 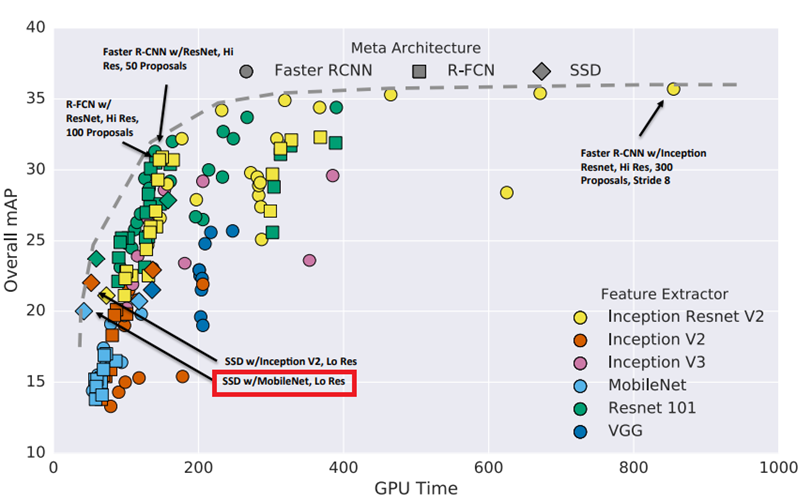 While in many situations a powerful GPU could carry out model training in a reasonable amount of time, for elaborate models such as object detectors, it can take days or weeks to complete. To make hyperparameter search and rapid iterative experimentations practical, we look to speed up training time by distributing the computation to multiple GPUs in a computer or even across a cluster of computers.

Below we briefly discuss the several ways distributed training can be accomplished, and introduce Horovod, a distributed deep learning framework that can be used with TensorFlow, Keras and PyTorch.

The gain in speed from distributing training to more than one GPU comes from parallelizing compute operations across multiple processes, each running on a separate GPU, for instance. There are two approaches for doing this.

In the model parallelism approach, the parameters of the model are distributed across multiple devices and one batch of data is processed in each iteration. This is helpful for very large models that cannot fit on a single device. Parallelizing a model requires it to be implemented with the compute resource in mind, and so there is no easy way to rely on a framework to do this for new models or device settings.

When using data parallelism, the same copy of the training script (a replica) is run on all devices, but each device reads in a different chunk of data at each iteration. The gradients computed by all copies are averaged by some mechanism and the model gets updated.

When considering "data parallelism", a key question is how we combine the gradients computed by each replica so that a single model is updated.

To use this, the training code designed for running on a single GPU needs to be carefully adapted, a rather error prone process. In addition, this distribution often suffers from various scaling inefficiencies, and GPUs are not fully utilized.

A different approach to gradient averaging was popularized by Baidu in early 2017, called ring-allreduce, first implemented as a fork of TensorFlow. In this approach, workers are connected in a ring, communicating with two neighboring workers, and can average gradients and disperse them without a central parameter server. Below is an illustration on how ring-allreduce works.

A key consideration in distributed deep learning is how to efficiently use the resources that are available (CPUs, GPUs, and more).

Horovod is an open source project initially developed at Uber that implements the ring-allreduce algorithm, first designed for TensorFlow. It provides several advantages when compared to the default TensorFlow implementation:

Horovod works with different deep learning frameworks: TensorFlow, Keras and PyTorch. Models written using these frameworks can be easily trained on Azure Batch AI, which has native support for Horovod. In addition, Batch AI enables you to train models used for different use cases at scale. The trained models can be deployed to the cloud, or edge devices.

In this section, you will learn how you can build, train and deploy an object detection model using Azure. We will use the following resources:

The diagram below illustrates the architecture of our solution. Once the COCO dataset is placed in Azure blob storage, we train a RetinaNet (described below) to perform object detection using Horovod on Azure Batch AI so that training is distributed to multiple GPUs. We then deploy the model as a REST endpoint accessible to users and applications using Azure Machine Learning. Each of these steps is discussed in the following sections.

COCO (Common Objects in Context) is a commonly used dataset for benchmarking object detection models. The COCO 2017 training and validation sets contain over 120k images representing scenes in everyday life, annotated with bounding boxes labeling 80 classes of common objects such as bicycles and cars, humans and pets, foods, and furniture.

We downloaded the 2017 training and validation images and annotations from the COCO dataset download page, unzipped the files, and used the AzCopy utility to transfer them into a blob container on an Azure Storage Account for fast and easy access during training. 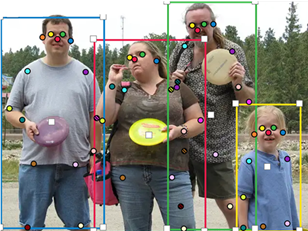 We create a cluster containing two Azure Data Science Virtual Machines of size NC24. Each VM has four NVIDIA K80 GPUs, as well as good mix of CPU, memory, and storage resources. During deployment, the Batch AI service coordinates setup tasks that need to be performed on each VM in the cluster. These include:

After specifying our cluster's configuration, we created the cluster with the following command:

RetinaNet, an architecture developed by Tsung-Yi Lin and colleagues (2018), is a state-of-the-art object detector that combines the fast inference speed of one-stage detectors with accuracy surpassing that of previous detectors, including those using two-stage approaches. Below is the result on the COCO dataset for multiple architectures, and RetinaNet achieves the highest COCO AP (Average Precision) score with decent inference time. 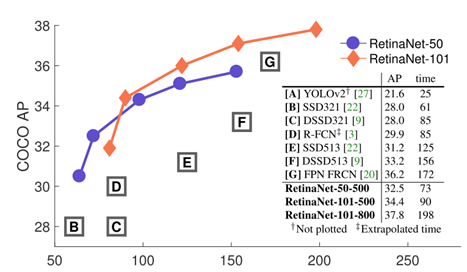 We adapted an existing implementation of RetinaNet, keras-retinanet, for distributed training using Horovod, with just a handful of modifications to the repository's train.py script. One of the advantages of Horovod is its simplicity: you only need to modify a few lines of your code without touching the rest of the code. Notably, you need to:

First, we added Horovod import and initialization statements at the top of the script:

We also modified the method that defines the TensorFlow session's configuration, so that each running instance of the script would be assigned one GPU by Horovod:

Then, we wrapped the script's parameter optimizer (Adam) with Horovod's distributed optimizer, to coordinate training between workers:

And finally, we replaced the script's callback for saving model checkpoints with versions recommended for Horovod:

With these simple modifications, the script is ready for distributed training with Horovod. We uploaded the modified script to our storage account's file share so that it can be accessed by our Batch AI cluster during training.

We used Azure Batch AI to create a training job using all eight available GPUs on our cluster. The training job configuration file, based on the Horovod recipe in the Azure Batch AI repository, specifies the arguments used to call the training script as well as where trained models and logs will be stored. The job is launched from the Azure CLI with the following command:

This eight-worker job ran at a rate of one epoch every 670 seconds, roughly 7.2times faster than when a single GPU was used: 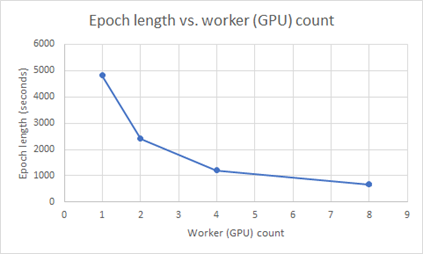 We can also list the output trained models and checkpoint files directly from the CLI, including a URL to download each file:

Once the cluster is configured, we can use Visual Studio Tools for AI to submit jobs to the Batch AI cluster instead of using CLI commands. This allows the developer to use IDE features in Visual Studio, such as IntelliSense, and to take advantage of the easily scalable compute resources of the cloud. 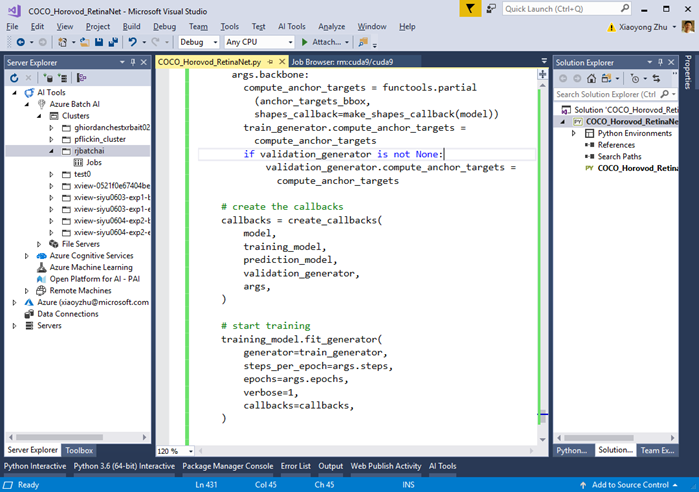 To do this, we can use Azure CLI and specify the required configurations using the Azure Machine Learning (AML) operationalization module, as follows:

In this specific case for keras-retinanet, we need to convert the model checkpoint file (which contains only the layers which were updated during training) to an inference model with all model layers present. This is done as follows:

In this blog post, we showed you how to do distributed deep learning using Horovod on Azure. We walked through training a RetinaNet object detector on the COCO dataset, with distributed training enabled through Horovod and Batch AI. In subsequent blogs, we will share results of our experiments with different models and training schemes. If you have questions or comments, please leave a message on our GitHub repository.