Azure VM Scale sets are a great way to deploy identical set of VMs (based on same VM image) in true autoscale. When one wants to change a application deployed to VM Scale sets, one common approach is to bake a new VM Image with the latest application code built in, and then update the VM scale set to use this modified image. Performing this task manually can be error prone, time consuming, and often only few individuals in the team can perform this task.

In this post we see one way in which we can set continuous deployment to an environment (called QA in the sample) when using VM scale sets, which means that every time the application is modified and code is merged in the configured git branch, the latest application is deployed to the VM Scale set. The Visual Studio Team Services (VSTS) release pipeline shown in our example can be enhanced to include more environments including production. We use packer in our release pipeline to continuously bake the VM image with latest application code, each time there is an application update. For details of configuring packer with Azure you can refer to my post using Packer with Azure .

The sample application code (php web application), the build / release scripts (including packer file, UI and load test files), and the VSTS release template can be found at my github repo . 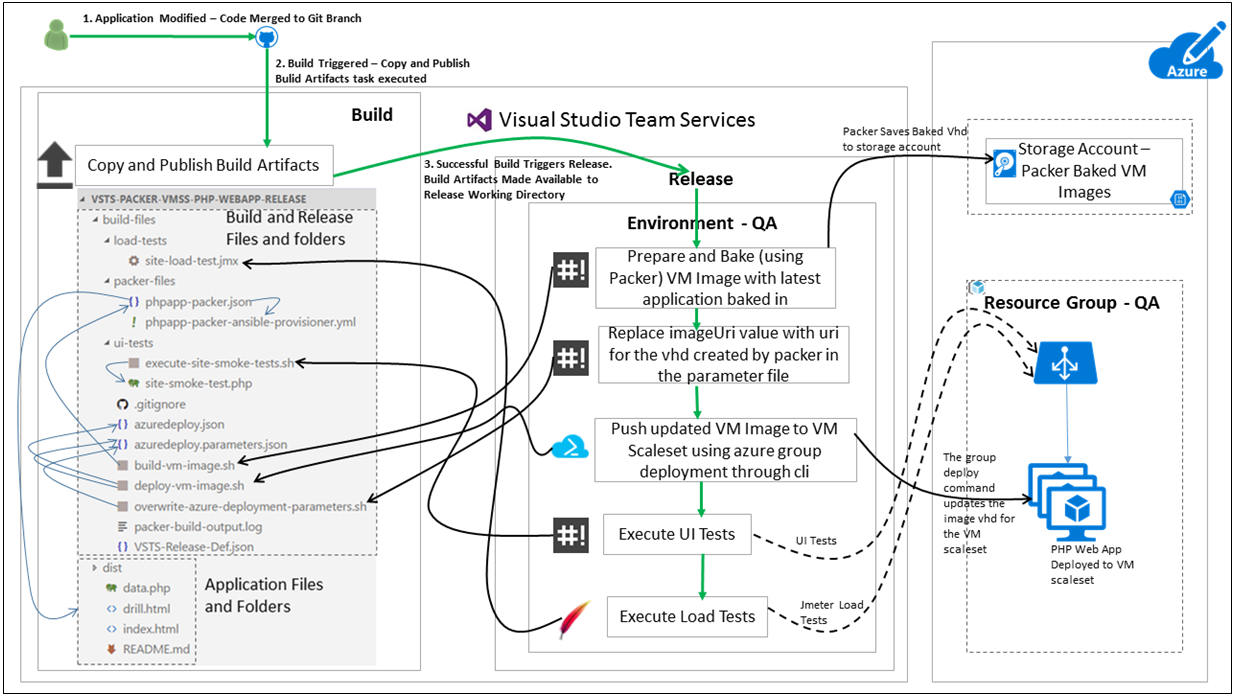 Will give overview of the solution before diving into into some of the details. The VSTS build is triggered each time code is merged into the master branch of the repository. The VSTS build in the sample is a simple one which just publishes files needed for the release. Successful build then triggers a release. The first step of the release packages the latest application files into an Azure VHD image using packer, this VM image (vhd) is stored in the configured storage account. Next we use the azure cli group deployment command to push the new VM image (with latest application code baked in) to the VM Scale set. The last two steps are for UI testing (Using php unit and selenium in this case), and Load testing (using JMeter). At the end of each successful release, the VM scale set has the latest application code.

Please Note : The VSTS VMSS task and VSTS Packer tasks are now available, The deployment pipeline is much more simpler if these tasks are used together. See the Post on how to use these tasks together to bake custom VM Image and update VM Scale Set Image.

Now let us dive into some of the details of our build and release configurations.

In the sample used for this post all tasks are executed the same QA environment. This Release configuration can be enhanced by adding other environments like Performance and Volume Testing envrionment (where the load test can be moved), etc.

Thanks for reading my blog. I hope you liked it. Please feel free to write your comments and views about the same over here or at @manisbindra.