So you’ve been developing on SharePoint for some time now.  You’ve followed best practices and developed code through SharePoint Features.  You’ve added your feature activation in your custom Site Definitions or you’ve created Stapled Features to activate them on OOB or existing Site Definitions.

The problems are when you already deployed multiple Site Collections that either:

The former is simple and happens all the time.  Examples of the 2nd could be that such that:

In the case of a new stapled feature that needs activation, it will require you to use the interface to manage site collection or web features on all sites and subsites that requires the feature activated – or you’ve used Gary Lapointe’s gl-activatefeature to do this (https://stsadm.blogspot.com/2008/11/activating-features-at-different-scopes.html).

Gary’s will get you there as much as this tool.  The nuance that the tool I had mind was more visual where you can use this to view all features, view their activation status across the farm, etc.

One question I’m expecting is that I built it for SharePoint 2007.  Well the obvious is that most of my customers are with 2007 and it’s a requirement.  I had an STSADM similar to Gary’s one, and his, that was helping; but I had this in mind for quite some time with just not enough time to make it.  2nd, this should work with SharePoint 2010 but I didn’t have the time to test it.  I’d like to test out what’s happening when you have upgrade code right in your feature before making this safe for SharePoint 2010.

I put the release at 0.1 as I’ve used it successfully and in production, but I didn’t have the time to implement a fully qualified test plan.  If you have feedback, feel free to comment with steps to reproduce and I’ll fix it.

My next step is really to make a Central Administration version of this as I would see a lot of value for that.  If you have any feature requests, feel free. 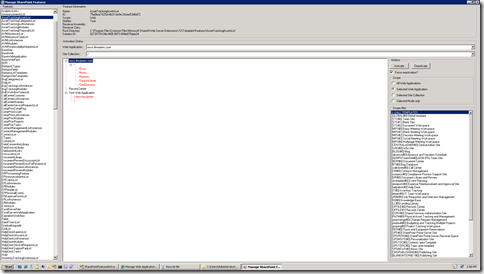 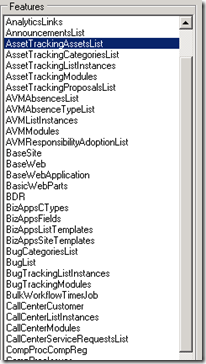 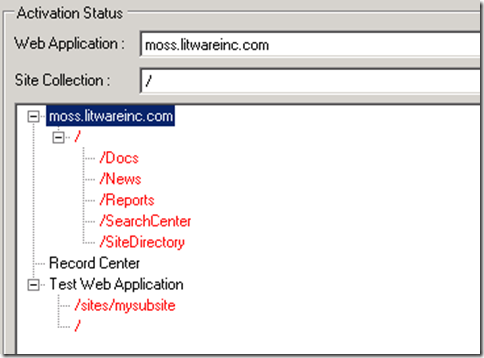 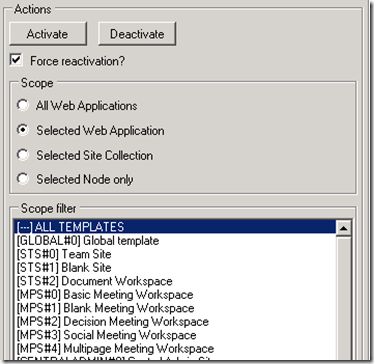