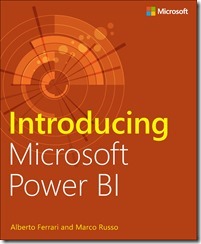 Get started quickly with Microsoft Power BI! Experts Alberto Ferrari and Marco Russo will help you bring your data to life, transforming your company’s data into rich visuals for you to collect and organize, allowing you to focus on what matters most to you. Stay in the know, spot trends as they happen, and push your business to new limits.

This free ebook introduces Microsoft Power BI basics through a practical, scenario-based guided tour of the tool, showing you how to build analytical solutions using Power BI. Read the ebook to get an overview of Power BI, or dig deeper and follow along on your PC using the book's examples.

Introducing Microsoft Power BI enables you to evaluate when and how to use Power BI. Get inspired to improve business processes in your company by leveraging the available analytical and collaborative features of this environment.

Be sure to watch for the publication of Alberto Ferrari and Marco Russo's upcoming retail book, Analyzing Data with Power BI and Power Pivot for Excel (ISBN 9781509302765). Go to the book's page at the Microsoft Press Store here for more details: https://aka.ms/analyzingdata/details.

Microsoft introduced the idea of Self-Service Business Intelligence (BI) back in 2009, announcing Power Pivot for Microsoft Excel 2010. Strangely, at that time, it did not make big announcements, hold conferences, or undertake a big marketing campaign for it. Everything started slowly, with some enthusiastic users adopting the new technology, but the vast majority of people did not even know about its existence. As part of the community of BI professionals, we were very surprised by that approach. At the time, we could clearly see the advantages for users to begin adopting Power Pivot as a tool for gathering insights from data, so this complete lack of marketing was somewhat disappointing.

Thus, for several years we (as a community) kept asking Microsoft what they were waiting for; what was the delay in promoting Self-Service BI to the greater audience of data analysts, data scientists, decision makers, and BI enthusiasts all over the planet. We asked for the ability to share reports with a team, and the answer was to use SharePoint, either on-premises or the online version, with the first release of Power BI—an experience that was still not completely satisfactory. While we were waiting for Microsoft to fix the issues with the previous versions and to begin advertising the current products, it was doing something different that, with the benefit of hindsight, looks to have been the perfect choice. Microsoft collected the feedback of users, carefully considered what was missing in the world of end-user BI, and then crafted the version of Power BI that’s available to you today.

Power BI is an evolution of the add-ins previously available in Excel: Power Pivot, Power Query, and Power View. You can use Power BI with or without Excel—you no longer are dependent on the version of Microsoft Office installed at your company. People did not like to share reports by using only SharePoint, and Microsoft moved away from it. Users wanted a mobile experience, and the development team created it. Data analysts wanted power, simplicity, new visualizations, and all of this is now available in Power BI. In addition, a lot of effort went into the creation of a seamless experience in loading data from many different cloud sources and building the infrastructure needed to provide all BI enthusiasts with a framework with which they can grow their reports, share them with their teams, and refresh the data in a simple yet effective way.

To make a long story short, Microsoft heard the feedback of users and built a great set of tools for the adoption of Self-Service BI. And, now—only now—it has begun marketing it.

Suddenly, in the last few months, Power BI has become the hottest topic at conferences, webinars, talks, and courses. As expected, people like you gathered interest in Power BI and began to search for resources to learn it. This book is one of these resources and its goal is to provide you with an effective introduction to the features available in the new Power BI.

We wanted to write an introduction to Power BI that covers the basics of the tool and, at the same time, shows you what the main capabilities of Power BI are. Thus, it is fair to say that the content of the book is somewhat unbalanced. At the beginning, we go for an easy introduction of the concepts along with an educational approach that lets you follow on your PC the same steps we show in the book. However, if we continued with that same mindset for the entire book, its size would quickly become intimidating. Thus, after the first chapters, we begin to run a bit faster, knowing that we are no longer guiding you step by step. Instead, we show you available features; if you want to learn the details, you will need to read and study more.

This book is targeted to a variety of readers. There are information workers and people who are totally new to the BI world. For those readers, the book acts as a simple introduction to the concepts that are the foundation of BI. Yet, another category of we wanted to target is that of IT professionals and database administrators who might need to drive the decisions of the company in adopting Power BI, because their users are asking for it. If this is you, this book acts as both a simple introduction to the basic concepts, to help you understand why users are so interested in Power BI, and as an overview of the capabilities and tools available in Power BI, so that you can make educated choices in adopting it. Power BI is not just a tool: it is an ecosystem that can integrate existing corporate BI with Self-Service BI. The last chapter of the book gives you an overview of these capabilities.

We hope you enjoy reading the book as much as we enjoyed writing it. Keep in mind that this is probably your first step in the fascinating world of Self-Service BI, the first step of a long journey in gathering insights from your data.

Marco Russo and Alberto Ferrari are the founders of sqlbi.com, where they regularly publish articles about Microsoft Power BI, Power Pivot, DAX, and SQL Server Analysis Services. They have worked with DAX since the first beta version of Power Pivot in 2009, and, during these years, sqlbi.com became one of the major sources for DAX articles and tutorials.

They both provide consultancy and mentoring on business intelligence (BI), with a particular specialization in the Microsoft technologies related to BI. They have written several books and papers about Power Pivot, DAX, and Analysis Services. They also wrote popular white papers such as “The Many-to-Many Revolution” (about modeling patterns using many-to-many relationships) and “Using Tabular Models in a Large-Scale Commercial Solution” (a case study of Analysis Services adoption published by Microsoft). Marco and Alberto are also regular speakers at major international conferences, including Microsoft Ignite, PASS Summit, and SQLBits.

You can contact Marco at marco.russo@sqlbi.com, and Alberto at alberto.ferrari@sqlbi.com.