If you’ve done ConfigMgr OS deployments, you’ve probably seen an error dialog like this before: 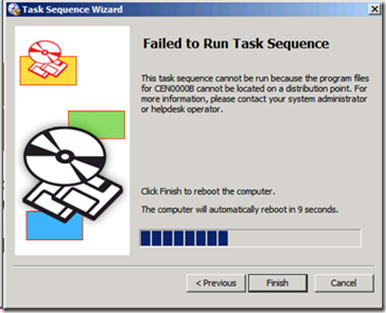 Pretty simple, right?  Distribute this package to a local DP and then try again.  But there are often dozens (or in extreme cases, hundreds) of packages referenced by the package, so you might have to go through this cycle a few times before you get them all.  Fortunately, there are some ConfigMgr WMI classes that can help figure out which packages are missing.  With a little bit of PowerShell logic, we can automate the whole process, through these basic steps:

This process will take care of boot images, OS images, OS install packages, driver packages, software update packages, or any other type of packages that are referenced (because behind the scenes, packages are packages to ConfigMgr – only the UI differentiates).

The scripts needed to this are attached to this blog.  You’ll need to save the SCCM.psm1 file in an appropriate PowerShell module folder (see the comments in the script for more details) so that the CheckTaskSequences.ps1 script can find it (and of course you’ll have to enable PowerShell script execution using something like “Set-ExecutionPolicy RemoteSigned”).  Then, just run CheckTaskSequences.ps1 each time you create a new task sequence.  It will very quickly identify the packages that need to be distributed and take care of those for you.

Note:  Version 1.1 of the script is now attached (using version 1.5 of SCCM.psm1) to address a couple of bugs found in the current version.  See the comments in CheckTaskSequences.ps1 for more information.