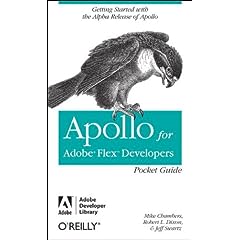 Ouch! is all I can say. Apparently an upcoming book from O`Reilly titled Apollo for Adobe Flex Developers Pocket Guide has been leaked (Ryan's like the super sleuth, nothing gets passed him)  on the Internet via torrents (which are evil and piracy is bad mmkkkk kiddies).

Sadly though, I do know of a certain culprit out there that raids these torrents and despite my mission to convert him to the goodside, I did ask what his thoughts were around the supposed leaked book.

Other responses from one another friend of mine:

" ..conspiriosy theory: adobe leak their own book to fuel the hype, pay O'Reilly for the lost sales/do a deal.. "

Point here is that now that it's leaked, the PR machine is going to have to go into over-drive to keep control of the message.

Someone in Adobe legal right now just had a bad day maybe?