‘Talking With The Eyes’: This MVP Teamed Up With An Old Friend To Test Window 10’s New Eye Control Feature 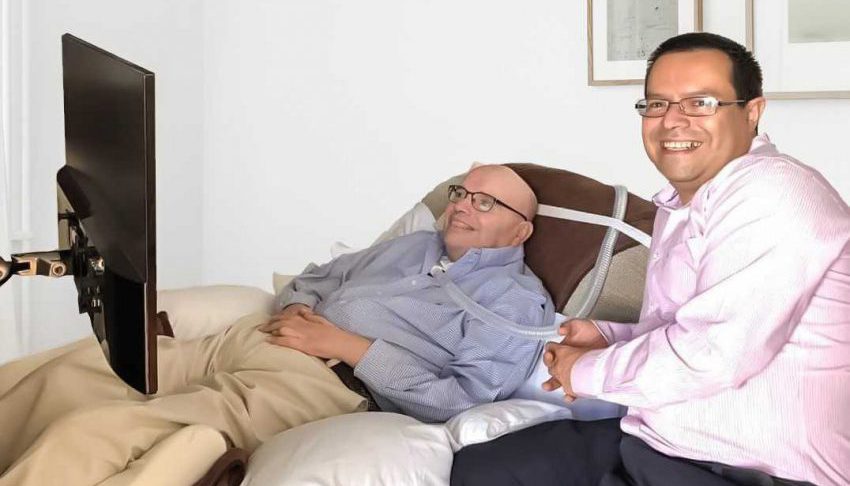 Microsoft’s mission has long been to “empower every person and every organization on the planet to achieve more.” Again and again, Microsoft MVPs prove they take this mission to heart. Among the many inspiring examples is Guatemala-based MVP Juan Alvarado - and how he teamed up with Microsoft to change an old friend’s life.

Juan and Otto Knoke have been friends for 15 years - they’re both tech lovers and problems solvers. But 10 years ago, Otto faced the onset of amyotrophic lateral sclerosis - or ALS - a motor neuron disease causing muscles to weaken and the loss of voluntary movement. Since then, Otto has used a wheelchair and has lost most of his ability to speak. To work with his computer, Otto had to learn to use his feet and a virtual keyboard.

But Microsoft’s new Eye Control feature for Windows 10 - which Juan and Otto helped provide feedback on - has enabled Otto to interact with the world around him in a totally new way. It puts a whole new spin on ‘talking with the eyes.’

Control a mouse, type, and communicate using only the eyes

Last summer, the Windows team at Microsoft announced it would be beta testing a new eye control feature for Windows 10. Born out of a 2014 Microsoft One Week hackathon project, the new feature could allow those suffering from neuromuscular diseases like ALS and other disabilities to control an onscreen mouse, keyboard, and text-to-speech experience using only their eyes.

Juan and Otto have been helping the Windows team test the eye control feature since last fall, with Juan meeting with Otto nearly every week. “[We] have direct connection with the [Microsoft] eye-tracking group and we are very happy [with the results],” says Juan. “Otto has sent several emails with suggestions or problems to the team and the team answers each one of them. It’s amazing, this kind of interaction.”

The eye-tracking technology will be a combination of software and compatible eye-tracker hardware, like the Tobii 4C. This technology unlocks access to the Windows operating system, enabling users to carry out tasks previously only possible with a physical mouse and keyboard, writes the Microsoft Accessibility Blog. The feature even works with Whatsapp, Skype, Excel, and Power BI.

Together Juan and Otto have provided feedback regarding the distance and orientation of the monitor, certain difficulties downloading the Windows Reader, and the positioning of the Tobii hardware with respect to the patient, among other things.

The team has made huge steps in building something that once out of testing, will profoundly improve the quality of life of millions. And Otto can attest to this: whereas before he required a human assistant to move the mouse and type for him, the eye-tracking solution has enabled him to work and communicate on his own.

“My experience with eye tracking has been incredible. I have two computers; in one I do my work, and the other I use to test the new features.” said Otto. “There are no words to describe the joy it has given me and my loved ones. We don’t get frustrated anymore, since I can type of talk using the text to speech option.”

And none of it, said Juan, would have been possible without dedicated Microsoft team members. “We couldn’t do it without Microsoft, [who] created this technology.” To learn more about the testing, and to stay up to date with its progress, follow Juan on Twitter @juanbizzz.