Get your analytics to the next level with Azure Cognitive Services

Azure Cognitive Services is a set of APIs, which offer lots of different possibilities in regards to Natural Language Processing (NLP) and text/media mining in general - such as extracting keywords and topics from unstructured documents, or detecting emotion.  Right now, they’re still in preview.

In this article, I’m going to illustrate the power of these services, and bring Yammer Analytics to the next level. Yammer is a good use case because it contains tons of information about employees and partners, that can help identify some trends within an organization.

Although Yammer lets you use topics (i.e. hashtags), people don’t always take advantage of them. So, what if you could identify new trends in your reporting instead? What if you could do some sentiment analysis and learn about the overall atmosphere?  And perhaps, more pertinently, what if you could mine content that deviates from the company policy?

Azure Cognitive Services make all of this possible.

In this article, I will guide you through some of these APIs,  and demonstrate how to use them against Yammer data. We will learn:

To cover the above, I’ll be consuming the Text Analytics and Computer Vision APIs.

And guess what: you can easily give it a try yourself! They both come with a free Azure plan.

In a nutshell, V2 APIs are now exposed through Azure API Management. Therefore, before consuming the V2 APIs, one must first create the subscriptions in our Azure Environment.

Once created, you’ll find the important bits in the Keys section of the API component: 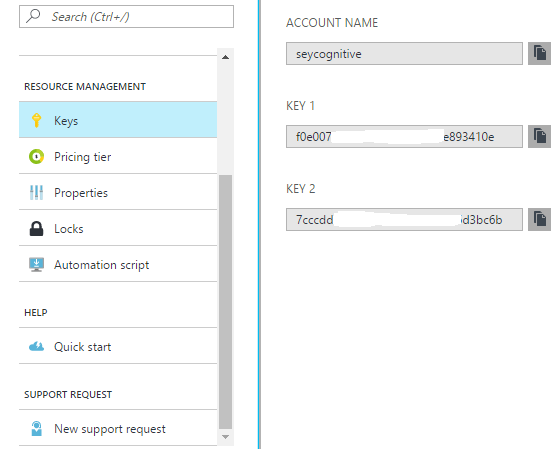 Note that the Quick start section refers to additional documentation and code samples.

So at this stage, the most important action is to grab the keys which you’ll reuse when querying the APIs. Each API has its own key.

Since our example is based on Yammer data, you’ll have to register an App for Yammer. You can do this in two ways: using an Azure Active Directory App,  or using  a Yammer App. Since we plan to consume the Yammer data from a background process (to prepare reporting data), a Yammer App is probably the easiest way to go. As an alternative, one could create an Azure Active Directory App with appropriate delegate permissions and use the Password Credentials Flow from our code.  But for the sake of this article, I’ll focus on the easiest approach. 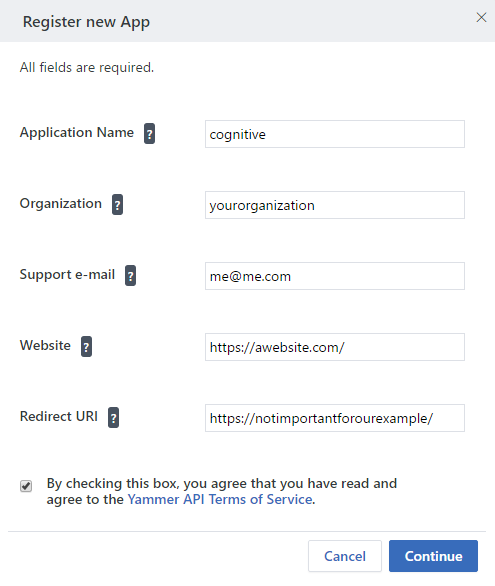 The token you now have was issued by a verified Yammer admin, and the App. You should of course not disclose it, and store it in a safe manner. Note that Yammer tokens never expire unless some event explicitly invalidates them (the App/User is removed for instance). This token is the Access Token you’ll have to include whenever talking to Yammer’s REST API.

Now that the environment is ready, it’s time to consume both Yammer and Azure Cognitive Services APIs. Remember that our objective is to collect messages and files of a Yammer group in order to detect topics, sentiment and images that potentially deviate from the company policy, such as adult-only content.

But first things first, let’s try out a few queries to make sure everything works fine. In a Console Program (which you could transform as an Azure Web Job later), make sure to include the following NuGet packages: Microsoft.ProjectOxford.Vision and Nito.AsyncEx. The latter is optional and helps run asynchronous code form console programs. To add these packages to your projects, simply right click on the References node ➔ Manage NuGet Packages ➔ and browse for the ones mentioned above.

Running the above code will result in the following JSON response:

As you already understood, the next step will be to analyze Yammer conversations.

Testing the Yammer token and the Computer Vision API at the same time (Image analysis)
Locate a target Yammer group, as well as a picture that was uploaded into it that you’d like to test. In order to get the picture information easily, just use the UI, go to the Files section of a given group, click on a picture and copy the file ID from the URL. Once done, you can run the following code:

This should result in something similar to this: 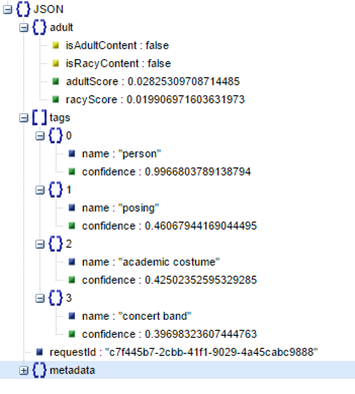 Note that you can get much more from the Computer Vision API. I explicitly restricted the visual features to Adult Content and Tags. Of course, you must replace values between curly braces with your own.

If you got to this stage, it means that you managed to configure and test the various APIs properly. It’s now time to write the actual code. Before we go further, it is important to notice that one of the operations we aim to do, namely the Topic Detection is a bit harder than others. Indeed, while Sentiment and Image analysis are quite straightforward, Topic Detection resorts to a background job (developed by Microsoft) running in Azure. This means that when sending data to this operation, one must wait until the job completes to fetch the actual results. This is a two-step operation. The first step consists of sending the data for analysis, while the second step consists of checking whether the background operation is completed or not.

Right after having sent data to the Topic Detection operation, the answer will be as follows:

And in querying the URL returned by the Operation-Location HTTP response header, you’ll see its status:

The status may be either of the following values: NotStarted, Running, Succeeded, Failed. Once the operation completes, the status will be succeeded and results will be available as part of the answer.

Now that the process is clear, let’s write some code. The below code is a console application that performs a data analysis of a given Yammer group. In the group, I created 102 conversations with random content coming from Wikipedia. The console application creates some statistics out of the results. For brevity reasons, I’m showing raw results. The ideal scenario is to store them into a database and run some Power BI reports on top of it.

Here’s a short explanation of the code where we perform the following sequence of actions:

Most of the methods developed here are nothing else but raw HTTP requests. At the time of writing, Text Analytics do not ship with a NuGet Package, unlike the Computer Vision API. The trickiest part consists in detecting topics, as Azure runs a background job and one has to wait until this job is finished. Here is an example of the output: 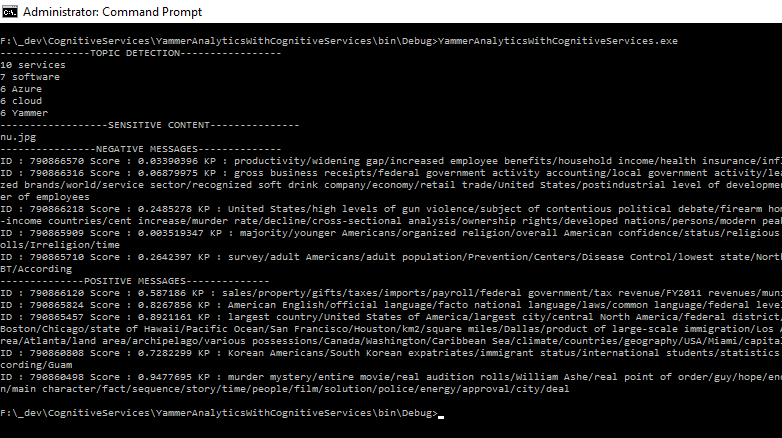 If you try out the above code, it will surely work.  But here’s some things you should pay particular attention to:

The entire code sample can be found on GitHub https://github.com/stephaneey/azure-cognitive-services/.

In this article, we have seen how to mine data coming from one Yammer group. But you can of course expand that to all the groups. If you plan to analyze the entire Yammer content, you’d better use Yammer’s export API. I have written a NuGet Package (Install-Package Eyskens.YammerExportAPIWrapper) that helps dealing with exporting data and files.

We only worked with two Azure Cognitive Services APIs, but they offer much more. You can check them out on the official documentation page: https://www.microsoft.com/cognitive-services/en-us/apis.

There are many other use cases where these APIs may come into play, not only for reporting purposes, but also to control user input in real-time and act upon it. 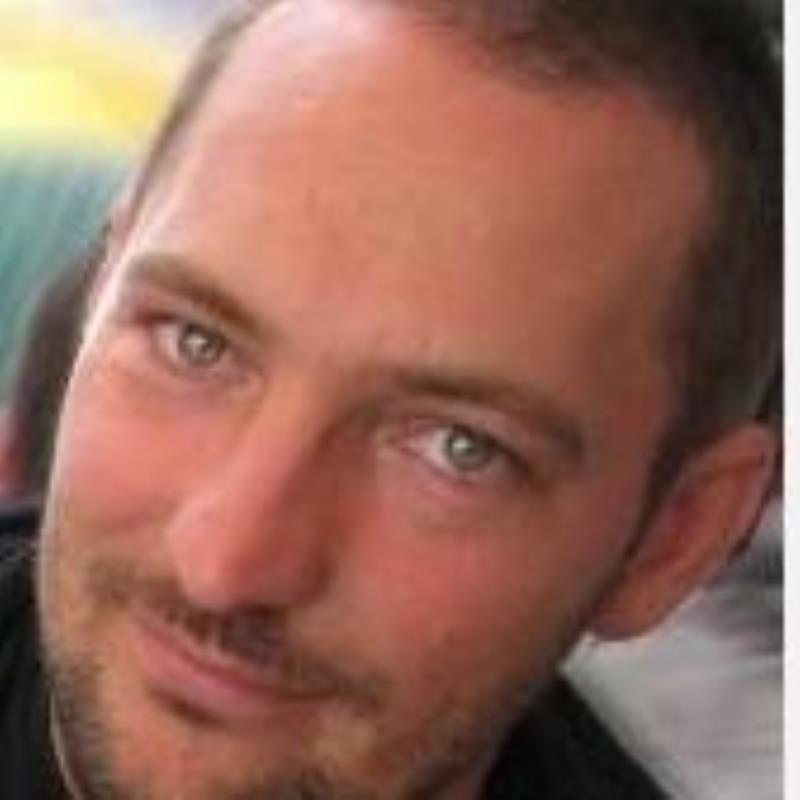 Stéphane Eyskens is a senior technical architect in Office 365, Azure PaaS and SharePoint. He’s been a consultant for 17 years, and holds a master’s degree in ICT Sciences. During his studies, he about learnt NLP and NER techniques, hence the natural attraction for Azure Cognitive Services.