Recently I worked with customer on interesting scenarios where they needed they were unable to make necessary restriction when using multiple WIFI Networks. They created WIFI Network devices such as Computer, Tablets and Mobile Phones. That was necessary because which network provided a different level of access. The goal was to ensure all WIFI networks (SSIDs) can be handled by a single NPS Server and users cannot use their credentials to access other WIFI SSID if they are not authorized. However, after creating a few Network Policy Rules, the first side effect was when a user accessed SSID, for example for SSID dedicated to mobiles, user was getting authenticated in another rule dedicated SSID for computers.

For this scenario, the following Network Policy Rules and respective specific Groups show below:

Here is a view of the same rules above inside the NPS interface:

The diagram below shows how the policies should work. One of the requirements is to ensure when I user does not belong to a group, she or he should not be authorized to use the respective SSID. In this case, we can do more granular control of which type of devices can access the network with different restrictions. For example, for tables accessing CTTABLETS will have only access to Internet but no access internal resources, while for computers accessing WIFI SSID CTCORP they should have full access to the network and Internet. 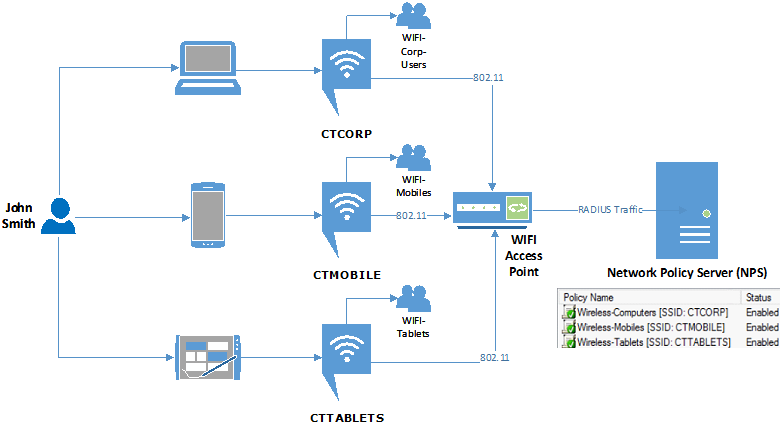 The real problem starts when user belongs to two or more groups. For example, user John Smith is authorized to access WIFI from all types of devices, which means he belongs to all groups listed above. However, when using his computer, we need to make sure he authenticates on WIFI SSID CTCORP, when using his Smartphone, he needs to access WIFI SSID CTMOBILE and when he uses his Tablet he needs to use WIFI SSD CTTABLETS.

In case we John Smith is removed from group CONTOSO\WIFI-Mobiles he will still have access to the SSID CTMOBILE. Why? If you see the list of rules Rule: Wireless-Computers [SSID: CTCORP] has process order 1. Which means he will be authenticated by that Rule.

Resolution
The Solution for this scenario is to add a Condition inside the Network Policy and specify the Called Station ID which presents the WIFI Access Point MAC Address plus SSID.This information can be easily extracted from NPS Event logs (Event Viewer – Custom Views – Server Roles – Network Policy and Access Services). When user is using a specify SSID that information is specified on Called Station ID populated as highlighted below.

In summary, here are the action to do in each one of the Network Policy Rile, where you will specify the respective SSID as shown:

Here is an example on how is done via GUI in five and self-explanatory simple steps : 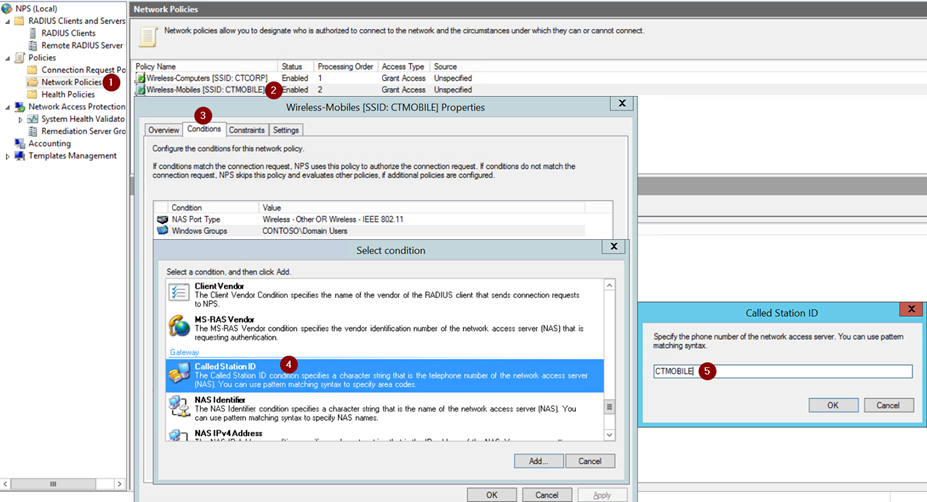 It is important to note that you just need to add the SSID name as is and it will be searched in the field as string in any position. You can play with regular expression also well to adequate with your needs. You can leverage this documentation in TechNet: Using Regular Expressions in NPS

In this article, we demonstrated how to allow a single user who belongs which needs access multiple WIFI Networks (SSID's) while using a single Network Policy Server (NPS) to perform the authentication correctly on its respective rule matching the SSID by using Called Station ID. I hope this help you to implement this kind of scenario on your network and let us know your thoughts or questions in the comments below.