Artificial Intelligence In The Classroom

This article first appeared in the Interface Magazine March 2018 edition and has been republished with the kind permission of the editors of Interface. You can see the rest of the great articles here.

It is an exercise in stating the obvious to say we are living in a rapidly changing world, where technology is both one of the most disruptive and exciting influences on our society. Yet change is constant, and something that we have experienced forever - in the 17th century King Henry IV of France wished for all his people to have “a chicken in every pot.” Fast forward 300 years to 1977 and Bill Gates’ vision was for a “computer on every desk and in every home” and now with the advent of Artificial Intelligence (AI) and the Internet of Things (IoT) it seems there is a computer in every pot and chicken!

Education is not immune to the increasing influences of technology and yet after a decade working in schools and the wider education sector, I’ve never been more convinced that teachers are the most valuable resource a school can possess and the old scare-mongering that robots will replace them could not be further from the truth. That said, technology and AI is going to empower and enable schools and teachers to do more than ever before and this is at the heart of Microsoft’s vision and is evident through increasingly smart applications designed to help educators and students alike.

Familiar Office applications are now ‘super charged’ by the power of the intelligent cloud, utilising  Machine Learning (ML) to infuse AI driven features into the products and help teachers improve learning outcomes. This is perhaps most evident in the area of accessibility, where Microsoft works to ensure every student has access to technology in a way that will help them learn.

Presentation Translator is a free plugin for PowerPoint that creates real-time subtitles of what the teacher is saying, displaying them below the presentation. Furthermore, using Azure Cognitive Services, AI-powered speech recognition and translation allows students to hear or read what is being said in their own native language.

Even in classes where English is the only language being spoken, deaf or hard-of-hearing students can follow along with the real-time transcriptions, either on the teacher’s display or by joining the conversation on their smart phone. From the free app, students can translate the conversation into over 30 languages and ask questions via voice or keyboard entry, which are optionally displayed alongside the teacher’s sub-titles. Presentation Translator maximises and reinforces key learning messages by presenting concepts both aurally and visually to students, as well as providing a searchable typed transcript for revision later.

For the visually impaired, the free Seeing AI app also leverages the massive computing power of the Azure cloud to narrate the world aloud to a student, simply by taking a photo with their smartphone. Seeing AI delivers the relatively simple “read aloud” of text held in front of a smartphone camera, through to aiding a student by scanning currency when paying by cash and reading barcodes off products (with audible beeps to help guide and align the camera). Developed largely by a blind employee at Microsoft, the app can even describe a scene if a photo is taken such as “I think it is a man jumping in the air doing a trick on a skateboard.” For visually impaired students, having a scene in a classroom or playground independently described to them is a liberating experience increasingly possible through the power of AI. 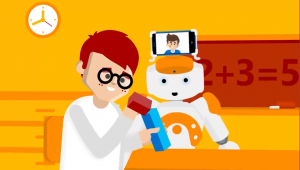 It seems strange to suggest that technology alone can generate a greater sense of inclusion for students. Yet, just like Presentation Translator and the Seeing AI app can draw students into a conversation, AI powered robotics can do the same for students who experience long term medical absences from their classmates.  Avatarion is a Swiss company that builds robots connected to the Microsoft Azure IoT Hub that provide absent children a physical presence in class, with full video and audio connections to their hospital or home so they can continue to participate in their learning. The child uses a tablet to control the robot’s movements, speech, send images to classmates and answer questions by raising the robot’s hand and speaking through a connected microphone and speaker. Cloud based AI monitors the robot’s performance at all times, sending valuable information back to the developers to ensure it performs securely and consistently as it represents that ill child in the classroom.

Another combination of AI powered apps that are making significant improvement to literacy levels for students: Microsoft Office Lens and the Immersive Reader in OneNote and Word. Office Lens is a free smartphone app that allows students or teachers to take a photo of text and send it to OneNote or Word where Optical Character Recognition (OCR) is performed by the Azure cloud meaning the text can now be highlighted, have increased spacing between words and syllables and read aloud using the Immersive Reader build right into core Office365 products. Independent research carried out in 2017 shows that the use of Immersive Reader and Learning Tools can significantly improve the reading and writing levels of students and increase equity to educational resources for all students.

As the simple-to-use apps above show, Microsoft does not expect every teacher to be a data scientist and AI is increasingly delivered directly via apps that can be used easily by anyone. However, there is also a rich set of tools in the Azure cloud that developers can leverage to build AI powered applications for schools to harness. Tools such as the Office Graph API, Cognitive Services and Media Analytics can be combined with ML to provide deep analytical insights into student performances and then be visually displayed using Microsoft PowerBI dashboards.

The Tacoma Public School District utilised these for AI powered analytics and improved their student graduation rates from 55% to 82.6% over the course of six years. This was not, however, an exercise in technology in isolation. Instead, the school set out to ‘measure the whole child’ and based the programme on four goals:

By pooling all available institutional data on the students in the Azure cloud, along with accessing additional data from government departments and even social media, the Tacoma Public School District was able to use ML and AI to gain deep insights into their students and identify in real time any ‘at risk’ students who required immediate intervention and support. 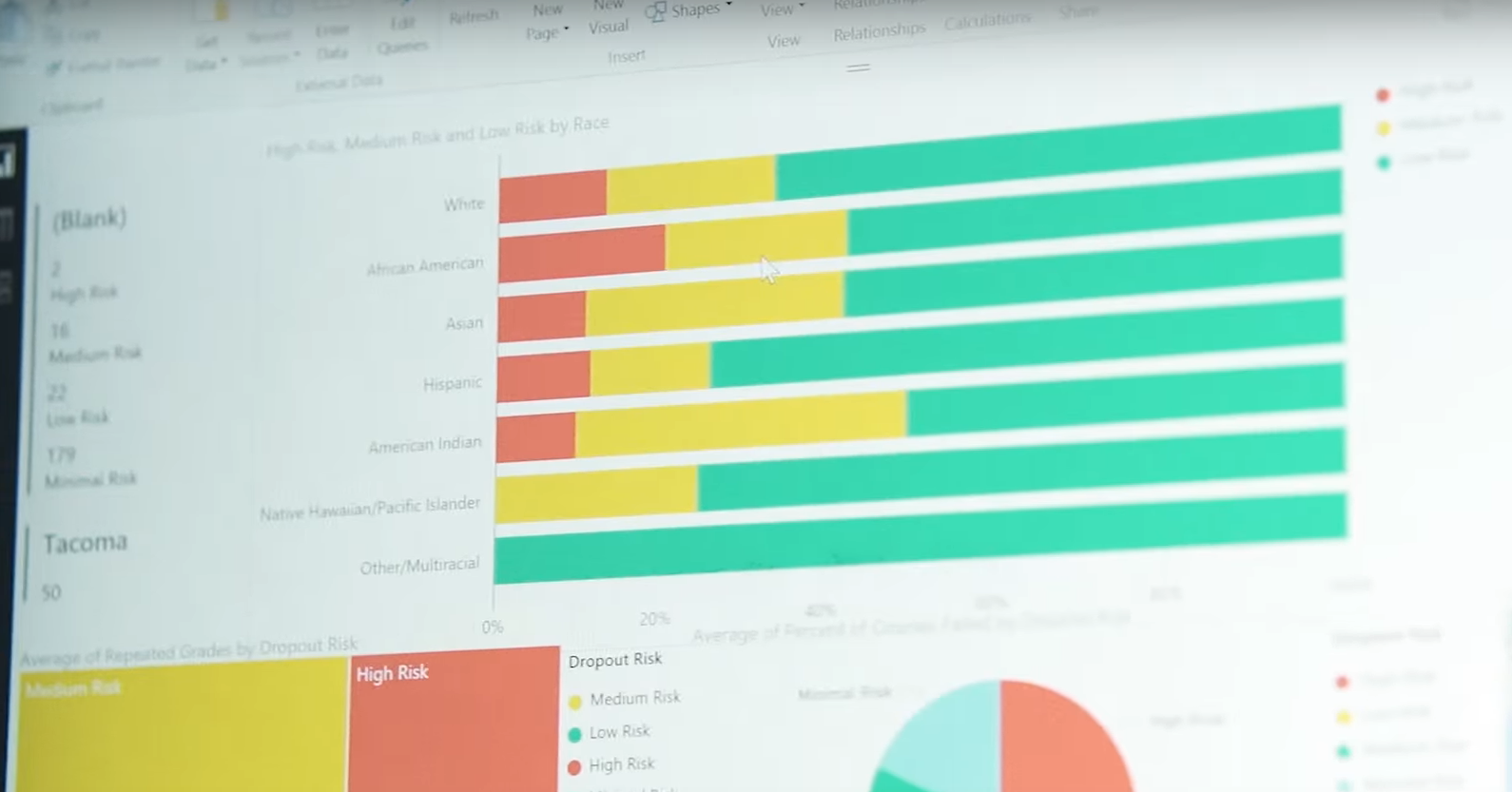 Closer to home, the Catholic Education of Western Australian (CEWA) have implemented ‘LEADing Lights’, a cloud-first approach to delivering personalised and AI-informed education to the 78,000 students across 163 geographically dispersed schools. Like Tacoma, they are collecting data points from a range of sources and providing rich insights for teachers to take early intervention with students. Dr Cathy Cavanaugh, the Head of Digital Transformation Learning at CEWA, explains how this can look at a classroom level:

“Microsoft Word is used all the time to create essays. Part of the AI in the back end means that as students are writing reports the text can be analysed and sentiment analysed to inform the teacher. There is AI that reads through the text and identifies – based on data points and markers – the level of literacy for the student”

­ There are many factors that influence the development and adoption of technology and AI. Brad Smith, President and CLO of Microsoft, recently wrote a blog showing the cultural changes that led to horses eventually being replaced as the primary means of transportation in New York City. Individual students, teachers, schools and even governmental departments will embrace technology at different rates as they perceive the value of it for their communities.

The respective pros and cons of technology in education have long been debated, however I believe Artificial Intelligence provides the key to a step change for the industry. It is not merely ‘digitisation’ of existing resources or teaching practices, instead it is adding a new layer of value by delivering data driven insights and tools to enable access to learning that simply could not be achieved without the power of the intelligent cloud. As this happens, more students will be enabled and empowered to learn, who in turn may go on to be the creators of even smarter tools to help educate the students of tomorrow.

Print version layout of the article.