For some readers, this will be an obscure 'technical post' on something that they never have to worry about in the course of their work. For those who read this and have Office365 administrative responsibilities then they may well exclaim "at last!" and rejoice over their morning coffee!

The ability to set Office365 groups created in Outlook as "private" by default was the third highest user request on UserVoice and the team have responded:

Based on your feedback, we are updating the default privacy setting for groups created across all five Outlook endpoints (web, PC, iOS, Android, and Mac) to be private by default where only approved members can see what’s inside the group. For customers that want to continue with the existing behavior of public by default (where anyone in your organization can see what’s inside) we are providing an Exchange Online PowerShell cmdlet to define the default value. This update will gradually rollout to all Outlook endpoints in the coming months starting with Outlook on the web.

There is a more detailed breakdown of this change from Tony Redmond that I encourage you to read:

Tony rightly points out that sometimes it is Education customers that drive the need for change:

Microsoft is doing well with Groups and Teams in the education market, especially in the U.S., and it is unsurprising to see them respond to these customers by making groups private by default.

Having worked in schools and now supporting them with their O365 setups, I've heard of more than one story where teachers have created a group to share "teacher only" content, only to learn it was public and students were able to see it. This default setting change is going to go some way towards preventing this from happening and bring O365 Groups more in line with MS Teams default settings which are private (with Team members needing to be explicitly invited to see content).

This link is a good resource from Microsoft giving the current status of private vs public for the various O365 services and will be updated regularly. Right now, it looks like the following: 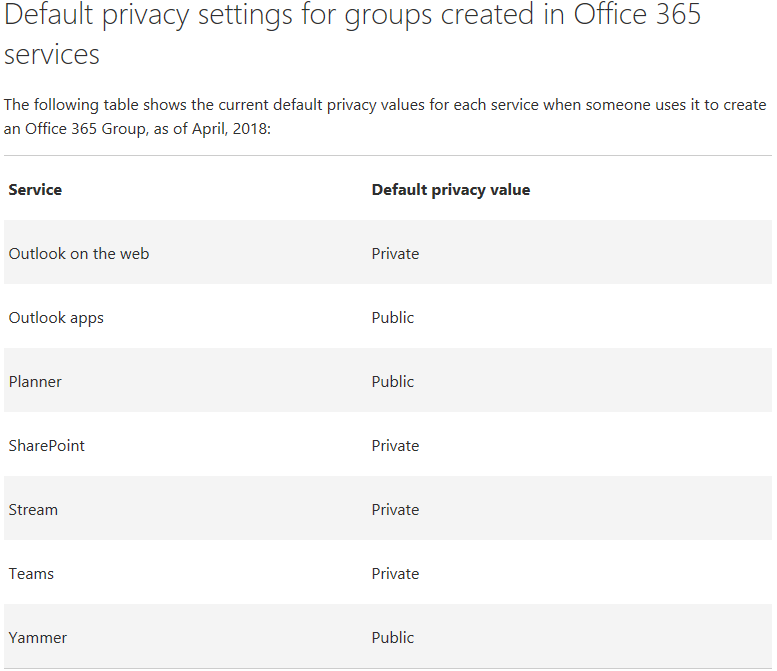 The above will change regularly. Click here for latest details [/caption]

For those that don't like change, there is of course the option to stick with the status quo and use PowerShell to keep groups public at an organisational / Tenant level:

If your organization wants Office 365 Groups for Outlook to be created as Public by default (or Private), use this PowerShell cmdlet syntax:

To set to Private:

To verify the setting: