Why Did The Titanic Sink? Explaining With OneNote & Digital Ink

I do a lot of demonstrations to schools and educational IT partners and one thing I commonly get asked is "can you explain why Digital Inking is so valuable?" Consequently, I decided to create the above video showing how visual ideation looks when using Microsoft OneNote and Digital Inking on my Surface Book and compared it to a traditional typed and bullet-pointed list attempting to answer the same question:

Why did the Titanic sink?

I'll leave it up to you which version you find more memorable, however the use of the incredible SAMR model is always helpful in these discussions: 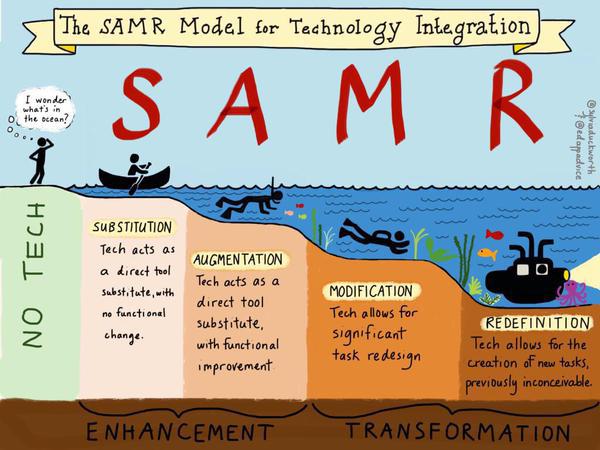 SAMR is a simple and incredibly instructive taxonomy to assist teachers planning how they can integrate technology into their pedagogy.[/caption]

In a simple example like this, I'd explain SAMR a follows:

Here's the final two screenshots of the different ways we could record our responses to the question "Why did the Titanic sink?" 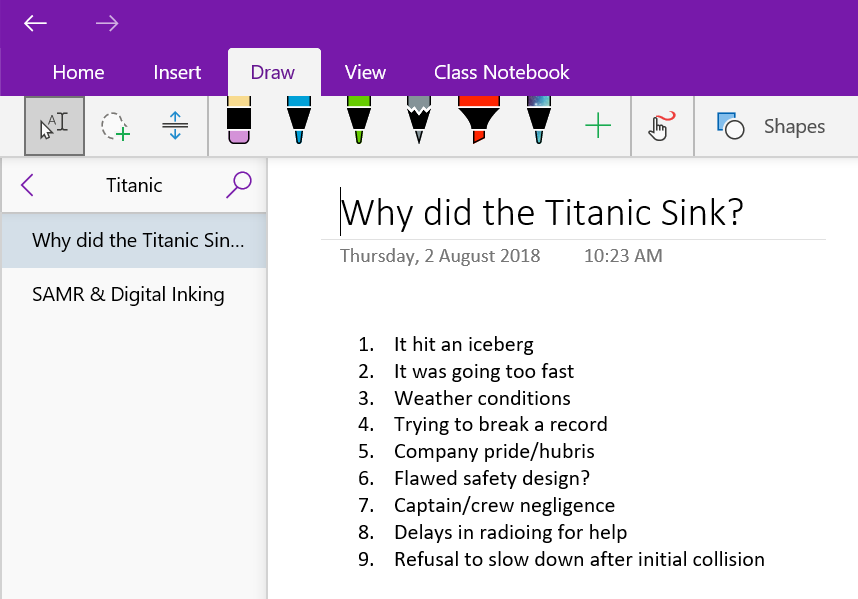 A "traditional" approach using a keyboard and enumerated list - how memorable is this? [/caption]

A zoomed out view using Digital Ink on my Surface Book, with sketches and symbols naturally recorded as ideas expanded. Note the ability to embed third party media like YouTube directly into the canvas and ideas re-arranged, grouped and re-sized based on importance.[/caption] 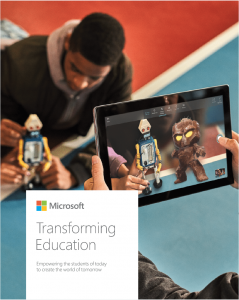 This month, Microsoft released an excellent collection of research collated into a single book called Transforming Education (you can download a free PDF version of the eBook here) and I highly recommend you have a look through this for guidance on what works and what does not work in the classrooms after 30 years of research into EdTech.

At the end of each section of the book are "Red Flags" - a short list of things that have not worked across the years when attempting to integrated technology into classrooms, and "Green Flags" - critical concepts that have been proven to add value in schools for educators and students alike by successfully integrating technology.

On pages 84-90 in the book are suggestions on device choice that includes interesting research into the value of adding a digital pen/stylus to the student device (as I used in my video above):

In two different studies in which high school students solved the same mathematics and science problems, the best results came from students using a digital pen, while marking up on the digital digital content. Using the pen, students produced 56% more non-linguistic content (i.e. diagrams, symbols, numbers etc), which led to a 9-38% improvement in performance. Additionally, research revealed that informal marking of existing content (using a digital pen on top of digital content) helps students to group and organize information, and has been associated with 24.5% higher solution correctness.

For further research into the value of digital inking vs typing have a look at pp.177-181 in the eBook.

How To Test Device Capabilities For Deep Learning:

Taken from p.90 of the Transforming Education eBook, this is a helpful exercise when selecting devices: 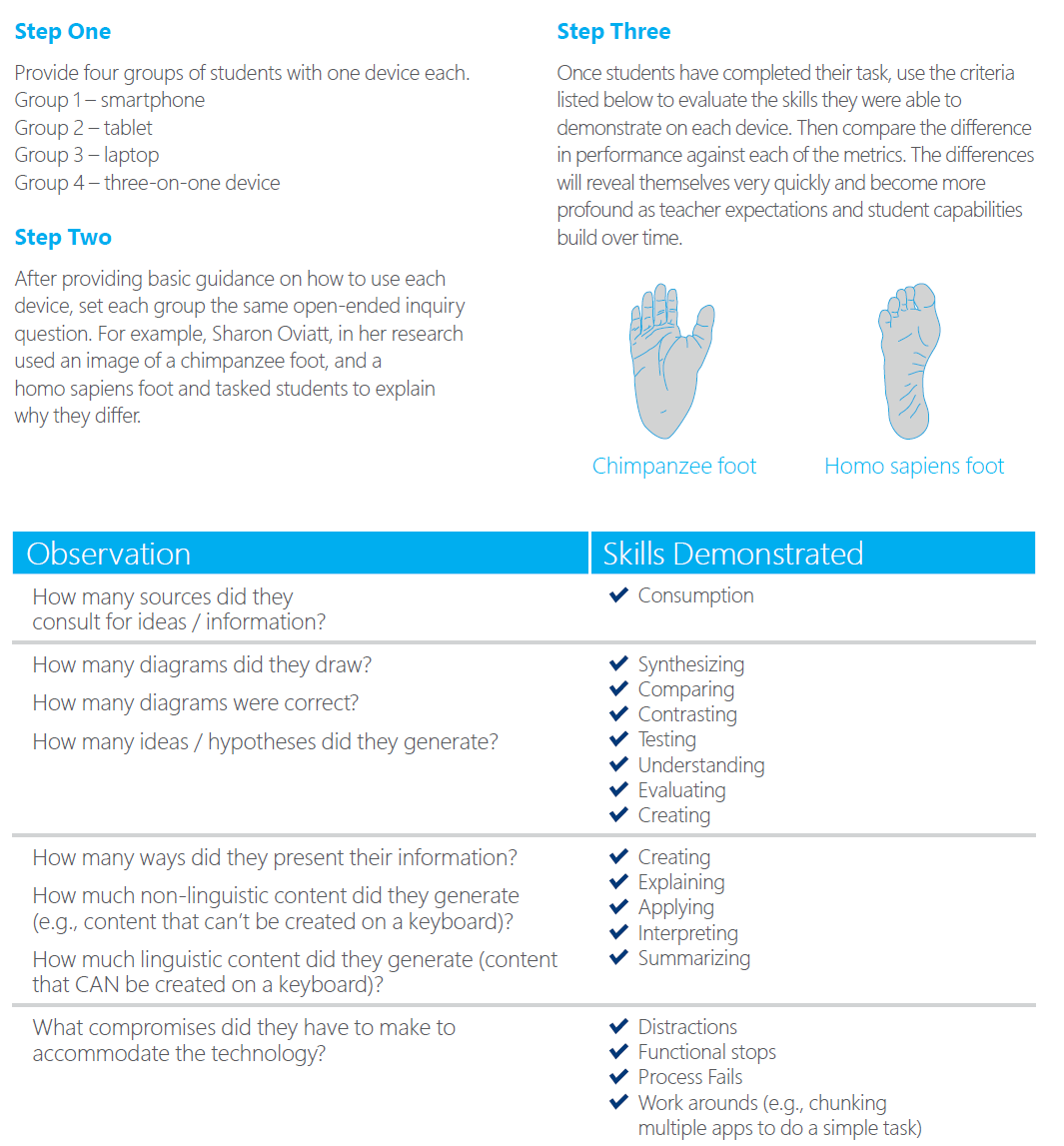 I'm a competent typist and can type at around 90 words per minute with 98% accuracy on an average day. I'm also a terrible artist and poor at handwriting. Even before I ever had access to a computer I struggled to keep my handwriting tidy and legible.

Nevertheless, the value I get from being able to sketch, link ideas and easily move and prioritize my thinking with Digital Inking far outstrips anything I can achieve with faster typing. When listening to a presentation I fall into the trap of attempting to type verbatim what is being said (and at 90wpm I can pretty much do that), whereas when digital inking I'm forced to synthesize information 'on the fly', actively engaging and processing knowledge during the session, resulting in far deeper recall and understanding at a later date. Whilst it is easy to scoff at my messy handwriting and poor artistic attempts to draw the Titanic hitting an iceberg, I'd be willing to wager you're going to recall those ideas and answers far more readily than if I'd simply typed them into a bullet point list.

If you have not used a device that supports Digital Inking and Microsoft OneNote, I really encourage you to give it a go. With the recent launch of the Microsoft Surface Go, this is the most affordable and compact Surface yet and an awesome introduction to the value of Digital Inking in the classroom.