Differences in how OMPM and OCCI generate macro counts

Update: This issue has been fixed as of August 2011 in Update 1 of OMPM. See our recent blog post for more information.

One of our field consultants, Curtis Sawin, discovered a discrepancy in the macro counts displayed by Office 2010 Migration Planning Manager (OMPM) and Office 2010 Code Compatibility Inspector (OCCI). For example, when run against the same Excel spreadsheet that contains macros, OMPM reports 889 issues, and OCCI reports 85 issues, as shown in the following examples: 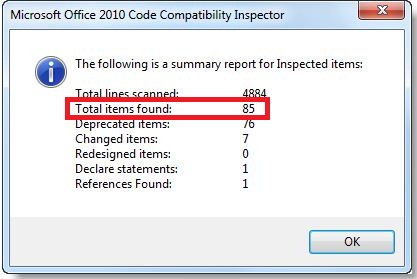 The discrepancy is caused by a difference in how the two programs detect macros. If a file contains a macro, OMPM scans it against *all* Office programs to determine which programs may have compatibility issues with the file. In contrast, OCCI scans the macro only against the program that is associated with the file (you can manually force it to scan more, though). For example, if an .xls file contains a macro, OMPM scans its compatibility against all Office 2010 products. OCCI only scans it against Excel.

The result is that the OMPM report reports more macro issues for a given file than OCCI reports—sometimes as many as 10x more. The number and types of issues identified by OCCI are the ones you’ll want to investigate. However, the OMPM report is internally consistent, so that if a file reports 100 issues, that file has more macro issues than a file that reports 50 issues. In this way, you can still use OMPM to prioritize investigation with OCCI.

We are working to fix the issue by making OMPM perform the same scan as OCCI, so that OMPM only counts issues a macro would have in the program associated with its containing file. We will post an announcement here when a fix is available.